Dying of Cancer Without Morphine 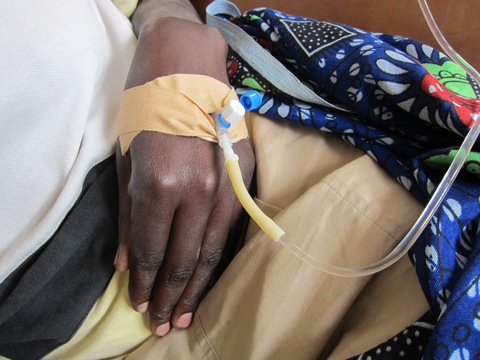 This story is part of a series, Cancer’s New Battleground: the Developing World. Above: A patient receives chemotherapy at the Uganda Institute. Photo by Joanne Silberner.

In an open ward at Mulago Hospital in Uganda’s capital city, Kampala, an elderly woman named Joyce lies in the fifth bed on the left.

She’s twisted the sheets around herself, her face contorted by pain. Joyce’s husband, thin and birdlike, hovers over her.

Joyce has cancer — it has spread throughout her body — and until a few days ago, she was on morphine. Then it ran out.

“She’s consistently had pain,” says a nurse. “And she describes the pain to be deep — kind of into her bones.”

The Ugandan government makes and distributes its own morphine for use in hospitals, but poor management means the supply is erratic.

“We’re in a very difficult situation,” says Lesley Henson, a British pain specialist on duty at Mulago Hospital. “[We have] patients who’ve been established and well-controlled on morphine, and running out and not having access to that medication now.”

In many ways, morphine is an excellent drug for use in developing countries. It is cheap, effective, and simple and easy to administer by mouth.

Yet according to the World Health Organization, every year more than five million people with cancer die in pain, without access to morphine.

“The fact that what stands between them and the relief of that pain is a drug that costs $2 a week, I think is just really unconscionable,” says Meg O’Brien, head of the Global Access to Pain Relief Initiative, a nonprofit that advocates greater access to morphine.

O’Brien says in well-off countries like the United States, there’s enough morphine to treat 100 percent of the people in pain. “In low-income countries, it’s just eight percent,” she says.

In many low- and middle-income countries — 150, by some counts — morphine is all but impossible to get. Some governments don’t provide it, or strictly limit it, because of concerns that it will be diverted to produce heroin.

And many doctors are reluctant to prescribe morphine, fearing their patients will become addicted — something that studies have shown rarely happens.

Land of Haves and Have-Nots

In India, whether you can get morphine depends largely on where you’re treated.

Tata Memorial Hospital, a modern and well-equipped medical center in Mumbai, has no problems getting morphine for patients.

“We have all the medicines [that are] necessary,” says Dr. Mary Ann Muckaden, head of pain relief at the hospital. “We never run out.”

But in other parts of the country, it’s a different story. Muckaden estimates only one to two percent of Indians with cancer pain get morphine.

Dinesh Kumar Yadav, 28, has come to Tata Memorial — a 30-hour bus ride from his home — to get morphine for his wife.

He tells me she is bedridden with pain but can’t get morphine in the North Indian state where they live.

Dr. Muckaden says part of the problem is a stifling bureaucracy.

“Many physicians in the North, they don’t want to go through the rigorous licensing to store morphine,” she explains.

There is a place in India where there are no barriers to morphine. But even here — at the CIPLA Palliative Care Center in the city of Pune — there are challenges.

You don’t see the challenges when you walk through the cool courtyard gardens with fountains and manicured walkways, or in the beautiful whitewashed buildings with large airy wards, each named for a flower.

“This is heaven on Earth,” says Asha Dikshit, whose mother came here last year in the last stages of breast cancer.

“She was in agony. Her shoulder had dislocated, it could not be fixed back,” says Dikshit. “She had pain in the back, and sometimes there were hallucinations.”

But she says her mother died — peacefully — on morphine.

Every patient here has cancer, and the care is free. Indian generic drug manufacturer CIPLA supplies the morphine and pays all the other expenses.

But even with all the center offers, the occupancy rate runs at only about 60 percent. One big reason, says director Priya Kulkarni, is a result of patients’ own concerns about morphine. They often think morphine equals death, and they recoil when doctors suggest it.

“They don’t want to give up on [patients] when it comes to giving them hope,” she says. “And saying [to] them something like, ‘I am going to refer to a palliative specialist,’ is indirectly saying [to] them that there is nothing more I can do for you.”

Despite all the obstacles to morphine’s use in the developing world, Kulkarni and others say things are starting to move in their direction.

Overall in low-income countries, morphine consumption is up tenfold since 1995, according to the International Narcotics Control Board. And several countries where not too many years ago there was no morphine — like Uganda — have at least some today, even if the supply is unreliable.

Back at the hospital in Kampala — where the pharmacy ran out of morphine and Joyce, the cancer patient, had to go without — palliative care specialist Leslie Henson finds a bit of luck. After leaving her patient, she steps into an office, glances at a bookshelf, and sees a forgotten bottle of morphine. It’s enough to treat two or three people.

“Hopefully, we’ll go take this to her and see what we can do,” she says as she troops back to Joyce’s room.

Soon, a doctor administers the morphine.

Joyce smiles. Her face untwists. And her husband looks ecstatic.

I ask Joyce if she’s glad to get the morphine. Her husband answers. “Very much, indeed.”

Other people in the hospital will remain in pain — there is not enough morphine to go around — but for the next few hours, at least, Joyce will be pain-free.

This story is the fifth in a five-part series produced by PRI and with the support of the Pulitzer Center on Crisis Reporting. The week of Dec. 10, the PBS NewsHour will post one story from the series per day. You can view the entire series on PRI’s website or view additional infographics from the stories here.