Today marks the 141st birthday of Dr. Albert Schweitzer (1875-1965). In 2016, he may be a somewhat forgotten, or even a controversial, figure but a half a century or more ago, the mere mention of the name Schweitzer instantly conjured up images of selflessness, heroism and the very model of a modern, humane physician.

Among his many charitable works, Dr. Schweitzer founded a hospital in Lambaréné, which was situated in what was then known as French Equatorial Africa, and is today the capital of the province of Moyen-Ogooué in the nation of Gabon. His 1931 autobiography, “Out of My Life and Thought,” describing much of his work in Africa, was an international best-selling book. In 1952, he won the Nobel Peace Prize.

Albert was born in 1875 in Kaysersberg (Alsace-Lorraine), Germany, (now Haut-Rhin, France), only two months after Germany annexed that province from France, as a result of winning the Franco-Prussian war. His father, a Lutheran pastor, moved the family to a nearby town, Gunsbach, which was situated in the foothills the Vosges mountain range. It was a beautiful locale and one that Albert would often return to for the rest of his life, especially when he was weary from his many medical and missionary responsibilities.

READ MORE: The story behind Alfred Nobel’s spirit of discovery

As a boy, Albert was frail in health but robust in intellect and talent. He took to playing the organ as soon as he was big enough to reach the pedals and amazed all who listened to him. The doctor never entirely left the pursuit of music and became well known as a virtuoso on the keyboard and pipes, especially when he played the works of Bach.

Albert entered the Kaiser Wilhelm University of Strasbourg at age 18. There he studied theology, philology, and the theory of music. He progressed to studying for his Ph.D. in theology in 1899 at the Sorbonne, where he focused on the religious philosophy of Immanuel Kant. The University of Tubingen published the dissertation that resulted in 1899.

During his compulsory military service in 1894, Schweitzer had an epiphany of sorts while reading the Book of Matthew, Chapters 10 and 11 (in Greek, no less). The passage that appears to have directed his professional life describes Jesus exhorting his followers to “Heal the Sick, cleanse the lepers, raise the dead, cast out devils: freely ye have received, freely give.” (Matthew, 10:8) In 1896, at the age 21, he decided to devote a period of time studying science and the arts and then to dedicate the rest of his life to helping the suffering.

Ever the autodidact, during this period Albert also served as curate for the church Saint-Nicolas in Strasbourg. At the same time he gave organ concerts, delivered lectures and wrote books about theology. The latter activity resulted in several volumes over the years that made his reputation as a major, albeit somewhat controversial, theologian. 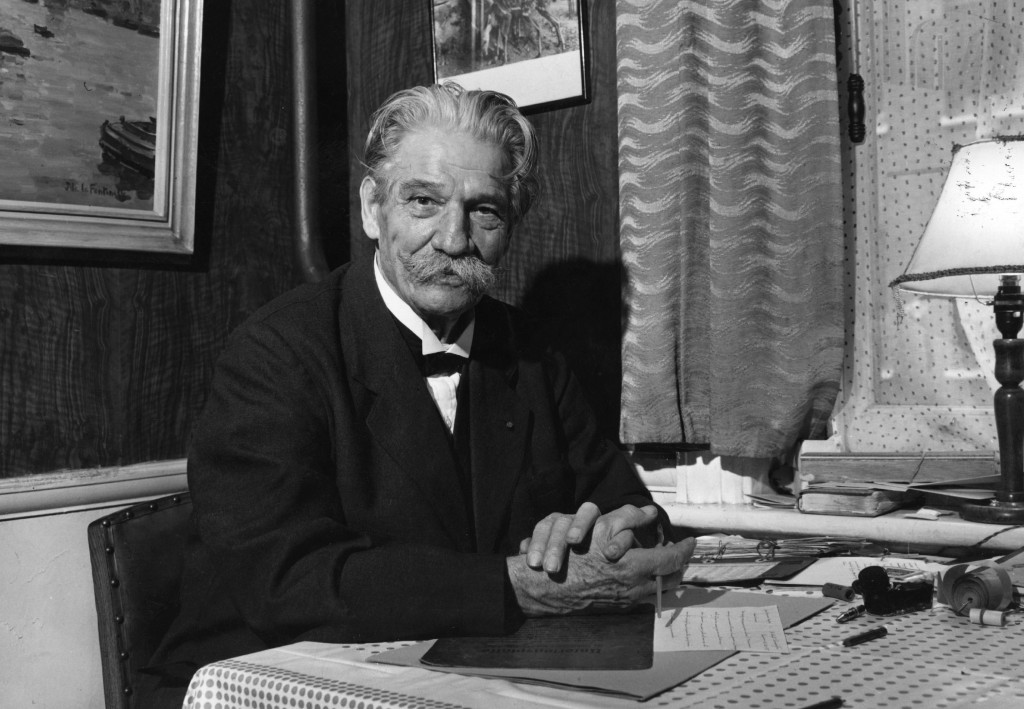 Philosopher and musician Dr. Albert Schweitzer, sitting at his desk in a London restaurant, around 1955. Photo by Hulton Archive/Getty Images

In 1905, he decided to take up a call from the Society of Evangelist Missions of Paris to become a physician and help them advance their cause and work. The following year, 1906, (and despite pleas from his family to pursue his religious studies) a 31-year-old Albert began medical school. He received his M.D. in 1913 with specialization qualifications in tropical medicine and surgery. His medical dissertation was titled, “The Psychiatric Study of Jesus.”

In June of 1912, he married Helene Bresslau (the daughter of a professor of history at Strasbourg). Helene took up nursing to help her husband in his pursuits; later, she became skilled at delivering anesthesia to the patients on whom Albert would operate. On Good Friday of 1913, the couple set sail, at their own expense, from Bordeaux to Africa. Once in Lambaréné, he established a small hospital at a station set up by the Paris Missionary Society. It was about 200 miles away from the mouth of the Ogooué River at Port Gentil (now Cape Lopez).

The maladies the Schweitzers treated were both horrific and deadly. They ranged from leprosy, dysentery, elephantiasis, sleeping sickness, malaria, yellow fever, to wounds incurred by encounters with wild animals and many common health problems to which the human body is subject. The living conditions, too, were horrid with makeshift huts for shelter and medical care, hot, steamy tropical days, cold nights, and huge gusts of wind and rainfall.

Schweitzer and his wife did the best they could. In their first nine months in Africa, they treated more than 2,000 patients. In the years that followed, the hospital grew by leaps and bounds, not only in terms of bricks and mortar but also in its delivery of comprehensive and modern health care. By the 1950s, 3 unpaid physicians, 7 nurses and 13 volunteer aides staffed the Schweitzer Hospital. At the time of Dr. Schweitzer’s death, at age 90 in 1965, the compound comprised 70 buildings, 350 beds and a leper colony for 200.

Dr. Schweitzer became especially famous for giving benefit concerts and lectures in Europe as a means of fundraising for his hospital back in Africa. His philosophy, he often stated, was built upon the principle of a “reverence for life” and the religious and ethical imperatives of helping others.

In the early 1950s, as the horrors of Hiroshima and Nagasaki finally settled into the world’s conscience, he joined forces with Albert Einstein, Otto Hahn, Bertrand Russell, and others to urge social responsibility and a ban on the use of nuclear weapons. Lecturing widely on “the problems of peace,” Dr. Schweitzer told his wide audience, “The end of further experiments with atom bombs would be like the early sunrays of hope which suffering humanity is longing for.”

Not all was sunny with Schweitzer’s social commentary. In recent years, many have taken him to task for decidedly paternalistic and racist descriptions of his African patients that would offend many a 21st century observer. For example, he once said, “The African is indeed my brother, but my junior brother.” On other occasions, he opined, “I let the Africans pick all the fruit they want. You see, the Good Lord has protected the trees. He made the Africans too lazy to pick them bare.”

The list, alas, goes on and his prejudices are difficult, if not impossible, to ignore.

Although unacceptable in today’s culture, Dr. Schweitzer’s comments about those he treated were, sadly, all too common during his era, one marked by colonialism, paternalism and racist views. Such comments were, at the very least, a contradiction of his worldview of showing reverence for all human life in both deeds and words.

That said, Dr. Schweitzer did devote more than half a century to practicing medicine in a remote location where few of his colleagues would dare to visit and for people who desperately needed medical care.

A complex man, to be sure, but his humanitarianism did affect the lives of many patients in desperate need of attention and, for the most part, he positively influenced the world in which he inhabited.

Left: Albert Schweitzer, circa 1960 in Lambaréné, Gabon, where he established a hospital. Photo by Rolls Press/Popperfoto/Getty Images