Dr. Alzheimer and the patient who helped reveal a devastating disease

It is fitting that a disease of forgetting is named for a person who is all but forgotten.

Wednesday marks the 153rd birthday of Alois Alzheimer, the German psychiatrist who is often credited for first describing the clinical and micro-anatomic features of a brain disease that steals the memories of millions of people each year.

There are, of course, many causes of dementia, a term derived from the Latin word, ‘demens,’ which means “without mind.” (The prefix ‘de’ connotes “off” or “not” and the noun ‘mens’ refers to the mind).

Most commonly described among the elderly, the devastating loss of memory and other cognitive functions associated with dementia can result from traumatic injuries to the head and brain, cerebro-vascular events, or strokes, untreated metabolic and endocrine diseases, and many other maladies.

For centuries, doctors had no clue as to the cause or causes of dementia. Even when autopsies were conducted at various points of history, brain analyses were not always performed and when they were, poorly understood. By the mid-nineteenth century, however, more and more scientists began to search for the anatomical seat of specific diseases and this was especially so with the pathology of many entities all lumped together under the term “senile dementia.” 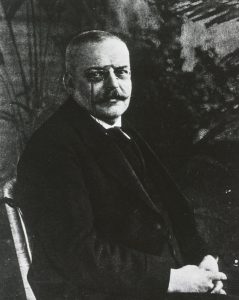 Alois Alzheimer was born on June 14, 1864, in the German village of Marktbreit am Main, in Bavaria. The second son of a notary, he attended the Royal Humanistic Gymnasium and proceeded to focus on medicine in Berlin he studied under the famed anatomist Heinrich Wilhelm Gottfried von Waldeyer), Tübingen, and Würzburg. In 1887, Alzheimer wrote his medical school thesis on the wax-producing ceruminal glands of the ear. He took his first professional post in December of 1888 as a clinical assistant at the Municipal Asylum for the Insane and Epileptics (Städtischen Anstalt für Irre und Epileptische) in Frankfurt am Main where he toiled for 14 years. Under the tutelage of the micro-anatomist Franz Nissel, Alois mastered the difficult tasks of preparing and staining microscopic specimens of brain and nervous tissue from his deceased psychiatric patients.

The patient who helped unlock the anatomical puzzle of Alzheimer’s disease was named Auguste Deter. She came to Dr. Alzheimer’s attention on Nov. 26, 1901, the day after she was admitted to the municipal asylum. Alois found her sitting on the bed in her room with a helpless, if not befuddled, expression on her face. Although she had enjoyed a loving marriage for over 28 years, she began experiencing changes in her personality at the age of 51, expressed as jealously towards her husband, progressive memory loss, suicidal thoughts, paranoia, shouting spells, and the fear that others might try to kill her.

READ MORE: How Florence Nightingale cleaned up ‘hell on earth’ hospitals and became an international hero

Confined to the asylum, Frau Deter’s health deteriorated at a dizzying pace, much to the consternation of her doctors and family members. She lost the ability to speak and spent most of her last months in bed, depressed, indifferent, and balled up in a fetal position. On April 8, 1906, a little more than a month before her 56th birthday, she died of overwhelming sepsis, believed to have been caused by a nasty bed sore expanding from her sacral spine to the left hip.

By this time, Dr. Alzheimer was working at the Royal Psychiatric Clinic at the University of Munich. At Munich, he supervised the famed Anatomical Laboratory founded by Dr. Emil Kraepelin, who is often referred to as the father of scientific psychiatry and a strong proponent of linking psychiatry to the emerging science of neuropathology. Dr. Alzheimer joined Professor Kraepelin in 1902 when the latter was still at Heidelberg University, and then followed him to Munich in 1903.

Alzheimer continued to monitor Deter’s disastrous progress from a distance and, after she died, he asked his colleagues in Frankfurt to send him her brain. After preparing a series of slides and studying them under the microscope, Alzheimer described the classic pathological features of the disease: a massive loss of neurons and the presence of amyloid plaques and neurofibrillary tangles.

Alzheimer continued to toil in relative obscurity, under the guidance of Dr. Kraepelin, before developing bacterial endocarditis, a severe infection of the heart, and dying on Dec. 19, 1915. He was only 51.

Today, Alzheimer’s disease is the cause of some 60 to 70 percent of all cases of dementia and affects more than 30 million people around the globe. Although the majority of these people are over the age of 65, approximately 5 percent, like Frau Deter, develop the illness much earlier.

One can only wonder if Alzheimer might have felt pride or horror at his name being so closely associated with one of the most devastating neurodegenerative disorders known to humankind.

In the United States alone, more than 5.5 million people have Alzheimer’s disease, and every 66 seconds someone develops it. The cost to care for these patients is more than $259 billion per year. By 2050, experts predict there will be more than 16 million Americans with Alzheimer’s disease and the annual cost to care for them could be as high as $1.1 trillion. More than 15 million Americans currently provide care for people with Alzheimer’s and other forms of dementia. In 2016, this added up to 18.2 billion hours, valued at over $230 billion. Although deaths from heart disease has decreased by 14 percent since 2000, deaths from Alzheimer’s have increased by 89 percent, making it the sixth leading cause of death in the United States. It kills more Americans than breast cancer and prostate cancer combined. Indeed, one out of 3 senior citizens dies with Alzheimer’s or another dementia.

It is an odd quirk of the medical profession that so many physicians race to be the first to describe a particular illness. The goal, of course, is that their name might be forever linked to various wars of biological devastation taking place within the bodies of their patients. One can only wonder, on this anniversary of his birth, if Dr. Alois Alzheimer might have taken pride or experienced a deep-seated sense of horror at his name being so closely associated with one of the most devastating, and increasingly common, neurodegenerative disorders known to humankind.

Left: A woman suffering from Alzheimer's disease walks down a hallway. Photo by SEBASTIEN BOZON/AFP/Getty Images