How Dr. Heimlich got his maneuver 40 years ago

The odd term “café coronary” refers to the act of choking on a mouthful of food, often taken from a bountiful plate at a restaurant. To many people witnessing such an event, the victim looks like he is suffering from a heart attack.

In 1972, the New York Times reported that more than 3,000 people in the U.S. choked to death that year, making it the sixth most common cause of accidental death. Up until that time, the usual response upon discovering a choking person was to slap him or her on the back. But many doctors insisted that a blow on the back tends to drive the object downward, lodging that obstruction even more tightly in the airway.

It was precisely this scenario that inspired a Cincinnati surgeon named Henry J. Heimlich to search for a better way to rescue a choking victim. He published his informal findings, an essay entitled “Pop Goes the Café Coronary,” in the June 1974 issue of Emergency Medicine. The method announced in this paper is now universally known as “the Heimlich Maneuver.” 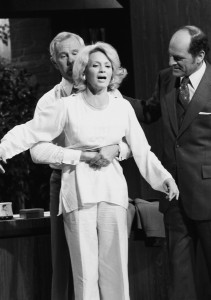 Dr. Heimlich began by experimenting with beagle dogs and large chunks of meat. After several physical maneuvers proved to be of no help, Heimlich was intrigued upon learning that by pressing upward on the dog’s diaphragm, the meat shot out. It was the flow of air “as in a small hurricane, not pressure that carried the object away.” Heimlich then worked on adapting the maneuver for people of all shapes and sizes from small children and women to large men. His prescription was a simple one: “Place the thumb side of your fist before the rib cage, just above the belly button, grasp the fist with the other hand and press the fist inward and upward. Perform it firmly and smoothly and repeat until choking object is dislodged.”

Dr. Heimlich always intended his maneuver to be practiced by the public at large, rather than exclusively by health professionals. Consequently, he wanted to publish his findings as soon as possible. He found a willing editor at Emergency Medicine but insisted on the following stipulation: “I’m sure it will work. If you publish it, I’d like you to alert a certain medical reporter.” The editor agreed to his terms even though medical decorum of that era often frowned upon doctors seeking publicity in the popular press.

In an autobiographical essay Dr. Heimlich wrote years later for the American Broncho-Esophageal Association, he identified the reporter as Arthur Snider. Snider wrote a medical column for the Chicago Daily News, which was syndicated in several hundred newspapers. The lead sentence of Snider’s June 16, 1974 column was a stunner: “Dr. Heimlich doesn’t know that his method will save a choking person, but the alternative is to let a choking person die.”

One week later, on June 23, 1974, a Seattle newspaper headline declared: “News Article Helps Prevent a Choking Death.” The story described a retired restaurant owner named Isaac Piha who had read Snider’s article seven days earlier. Piha was spending the weekend with his family at their summer cottage. A fellow vacationer, Irene Bogachus, was discovered to be choking on a piece of chicken. Piha performed the Heimlich maneuver and saved far more than the day.

Similar stories on the successful application of Dr. Heimlich’s method soon appeared around the nation with similarly striking results. But it was an editorial in the August 12, 1974 issue of the Journal of the AMA that first referred to the procedure as “the Heimlich maneuver.” More than a year later, on October 27, 1975, Dr. Heimlich published a formal, peer-reviewed article on the subject for the Journal of the AMA entitled “A Life Saving Maneuver to Prevent Choking.”

Although Dr. Heimlich was awarded the 1984 Lasker Award for Public Service, one of the most prestigious prizes in American medicine and public health, his career has not been without controversy. From 1986 to 2005, the American Heart Association and American Red Cross recommended only the Heimlich maneuver for choking victims. Since 2006, much to Dr. Heimlich’s vociferous disappointment, the American Red Cross has “downgraded” the Heimlich maneuver, referring to it only as “abdominal thrusts.” The American Red Cross currently recommends that for conscious victims, one should first call 9-1-1, make sure the victim is choking, ask permission to help and then apply 5 back blows, followed by 5 abdominal thrusts (“Five and Five”). This protocol should be repeated until the object is forced out, the victim can cough forcibly or breathe or if the victim becomes unconscious. (More specific instructions for helping both conscious and unconscious choking victims can be found on the American Red Cross and the American Heart Association websites).

By 1988, Dr. Heimlich was recommending the use of abdominal thrusts as a treatment for drowning, even though he had little data to support such an assertion. That advice has since been abandoned and is now considered by many physicians to be dangerous since it may increase the risk of vomiting and aspiration (the inhalation of vomit into the lungs). (Editor’s note: Heimlich still insists that his method works for drowning victims.)

For decades, Dr. Heimlich also advocated treating patients with cancer, HIV and Lyme disease by infecting them with malaria but both his theories and research on this issue have long since been discredited by other scientists and physicians.

In 2003, Dr. Heimlich’s longtime colleague Dr. Edward Patrick issued a press release declaring that he was the uncredited co-developer of the maneuver: “I would like to get proper credit for what I’ve done … but I’m not hyper about it.” More troubling, Heimlich’s son, Peter, has long curated a website refuting his father’s contributions to modern medicine and referring to his father as “a spectacular con man and serial liar.”

Controversies aside, the Heimlich maneuver has helped to save countless lives over the past four decades including President Ronald Reagan, New York Mayor Ed Koch, Cher and Elizabeth Taylor, according to the Heimlich Institute’s website. Nevertheless, choking continues to be a serious health risk. In 2010, according to the National Safety Council, there were 4,700 choking deaths in the United States, a 4 percent increase from 2009, making it the fourth leading cause of accidental death. Most telling, these statistics recall an adage everyone has heard his or her mother exclaim many times: Make sure you chew your food thoroughly before swallowing!