How Dr. Kellogg’s world-renowned health spa made him a wellness titan

In 1888, the powerful Michigan Central Railway erected a Romanesque train station in a remote hamlet in southwestern Michigan called Battle Creek. It was built to accommodate the multitude of health-seeking pilgrims flocking from all over the United States and Europe to “take the cure” at the town’s luxurious Battle Creek Sanitarium, which, although founded in 1866, officially opened its doors as the Western Health Reform Institute on Sept. 5, 1867.

Passing under the station’s arches of rough-hewn gray granite and Lake Superior brick, between 1870 and well into the Great Depression, were such luminaries as John D. Rockefeller Jr, fleeing from the disastrous events in his family’s coal mines at Ludlow, Colorado; Thomas Edison and Henry Ford, whenever they were in need of a tune-up or recharge from the stresses of industrial gigantism; Amelia Earhart, before her important flights; Warren G. Harding, before embarking on his presidential run; and Booker T. Washington and Sojourner Truth, nursing wounds fresh from fighting the war against racism.

The Battle Creek Sanitarium became a world-renowned destination of health and healing thanks to the charismatic ministering of its director.

Unlike the warm mineral baths at Wiesbaden or the saintly waters at Lourdes, the Battle Creek Sanitarium (affectionately known as “the San”) possessed no natural physical charms for restoring health. Instead, it became a world-renowned destination of health and healing thanks to the charismatic ministering of its director, John Harvey Kellogg, MD. A medical celebrity, best-selling author, magazine editor, skilled surgeon, public health expert, popular speaker and Seventh-day Adventist Christian missionary, Kellogg was a most impressive man. At 5 feet 4 inches tall, rotund yet athletic, and dressed entirely in white, the bespectacled, pointy-bearded physician proclaimed that God had chosen him to make the world a healthier place.

During his storied career, hundreds of thousands of persons with serious illnesses ranging from cancer and cardiac disease to gastric ulcers and debilitating digestive disorders demanded Kellogg’s treatments, which combined modern medicine, surgery and bacteriology with an eclectic blend of hydropathy, vegetarianism, electrotherapeutics, exercise and spiritual uplift.

Every day, hundreds of sickly passengers stepped off the train platforms for a long line of coaches operated by liveried horsemen. Welcoming them at the stately portico of the San was a veritable army of more than a thousand health soldiers. Included in this number were dozens of attentive physicians and hundreds of nurses, masseuses, bakers, waiters, cooks, bellhops, orderlies and attendants—all under the command of the good Doctor Kellogg, who examined every patient and prescribed to each an individualized treatment plan guaranteed to save the body, mind, and soul.

READ MORE: How the massive, pioneering and embattled VA health system was born

Once there, they sat and learned at the master’s feet about the myriad ways they could improve their diets, bodily functions and mental well-being. Cynical journalists mocked Kellogg’s followers as “Battle Freaks.” Such jibes hardly mattered. Whether he was lecturing in his tinny, flat Midwestern accent to standing room-only audiences, treating patients in his clinic and operating room, or communicating in exuberant prose to millions of readers, Kellogg was without question one of the most famous physicians in the United States.

The San’s luxurious lobby, richly adorned with thick Persian rugs, brightly lit crystal-and-brass chandeliers, and the finest walnut and oak furniture, was the size of a football field. Attached to this welcoming hall was a lush indoor palm garden with 20-foot banana trees providing fresh fruit daily for its visitors. Throughout the facility were 5 acres of indestructible marble flooring in which, bragged the colorful advertising brochures, “germs and vermin can never find a lodging.”

Looming above the main entrance was a 15-story tower housing more than 1200 well-appointed bedrooms, dozens of hygienically perfect operating suites, and a modern clinic for medical examinations. Alongside this building was a massive power plant that provided the raw energy required for the Sanitarium’s insatiable central heating and cooling, refrigeration, cooking, maintenance, laundry, bathing, electric and lighting needs.

The son of a broom manufacturer, Kellogg was obsessed with bodily cleanliness, both external and internal.

In a separate but connected structure were eight white-tiled indoor pools and hundreds of baths that would have made the ancient Romans jealous. Down the hall from the bathrooms was Kellogg’s sanctum sanctorum, the enema room, stuffed with gleaming “enema machines” that could pointedly deliver 15 quarts of water per minute into a human colon. Kellogg ordered his patients to produce 4 or more bowel movements a day, just like the healthy apes he had once observed while on a safari in Africa. The son of a broom manufacturer, Kellogg was obsessed with bodily cleanliness, both external and internal. If the water enemas were not enough, he ordered his patients to consume a pint of yogurt each day, followed by a yogurt enema. 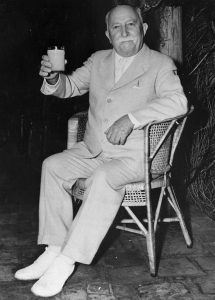 High colonics aside, Kellogg understood the importance of rest and relaxation for his patients and treated them to the finest entertainments and diversions. He constructed a theater and lecture hall to present morality plays, lantern slide shows and health dialogues; he staffed his ballrooms with a full-time orchestra and choir for nightly dances and musicales; elsewhere on the vast campus were stables housing teams of horses, carriages and sleighs; an army of bicycles at the ready for rides through the San’s labyrinth of wooded trails; a deer park; and manicured fields for all kinds of sporting games.

Throughout his career, Kellogg warned that consuming meat was the gastronomic equivalent of a death wish. A vegetarian long before the term was coined, Kellogg developed his dietetic theories in protest against that era’s standard fare of fatty, salted meats and fried foods.

Every meal served in Kellogg’s fabled dining room consisted of his own culinary creations: a version of peanut butter, nut-based meat substitutes, vegetable- and whole grain–based dishes, a “coffee substitute” made with molasses and toasted grains, and — his most famous contribution to the dining table — Corn Flakes. He commanded that every bite of these meals be chewed at least 40 times so that one’s saliva was thoroughly mixed with the food, thus initiating a healthy process of digestion and preventing overtaxing the stomach and bowels. He also required his patients to drink eight or more glasses of water each day. Many of his well-intentioned patients simply could not commit to such a dietary regimen, hence the flourishing business at a little joint down the road called the Red Onion Tavern, where the incurables inhaled Cuban cigars, chewed sirloin steaks drowned in gravy and onions, and drank tumblers of malt whisky before running back to the San to make the 11 PM curfew.

READ MORE: How Florence Nightingale cleaned up ‘hell on earth’ hospitals and became an international hero

In keeping with his philosophy of wellness and disease prevention — or, as he called it, “biological living” — Kellogg insisted on daily, vigorous exercise; plenty of fresh air; and complete abstinence from sex, alcohol, caffeine and tobacco. One of Kellogg’s most popular books, “Tobaccoism,” published in 1922, is considered by many medical historians to be the first popular text alerting Americans to the dangers of tobacco smoking.

Although journalists, novelists and screenwriters have often lampooned his life and somewhat unconventional theories, John Harvey Kellogg helped give the nation a thorough cleansing from the grime and sickness that characterized the Gilded Age and the Progressive Era. Eccentric, perhaps; but just as his Michigan peers Henry Ford and Thomas Edison ruled over their vast empires of automobiles and electricity, Dr. Kellogg was the industrial king of wellness.