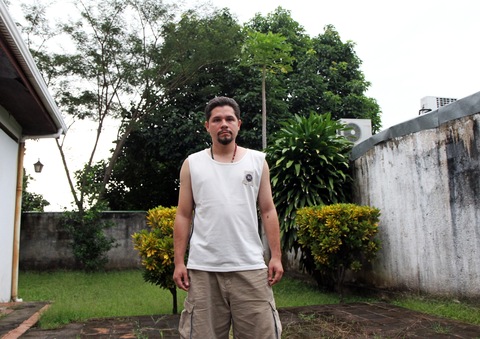 Mauricio Aguilar began using cocaine when he was 17 years old.

The NewsHour’s global health unit is in Nicaragua this week, reporting on upcoming elections and global health issues. Look for our broadcast reports and more online content in early November.

MANAGUA, Nicaragua — At the lowest point of Mauricio Aguilar’s battle with drug addiction, he stayed high for days at a time and slept on the streets of Managua at night.

He lied, sold his own clothes and stole to get money for more of everything he craved: more crack, more cocaine, more alcohol.

“I started living like a beggar. My family was ashamed, I didn’t see myself as my father’s son anymore,” Aguilar said through an interpreter.

Now 31, and trying to get clean, Aguilar was 17 when he tried cocaine for the first time. Drugs, he says, are available everywhere in Managua, and are cheap — a person can buy crack by the stone for less than $1.

His story of addiction is an increasingly common one in Nicaragua, and in other countries along the major drug-smuggling routes from South America to the hands of dealers in the United States. Cocaine consumption in particular has risen in several Central American countries in recent years, including Guatemala, Honduras and Nicaragua.

While reliable data on the scale of use is hard to establish, the United Nations’ 2010 World Drug Report estimated nearly one percent of Nicaraguans use cocaine, roughly on par with the rate in the major cocaine-producing country of Colombia.

The U.S. State Department also reported this year that use of crack cocaine, marijuana and methamphetamine among 16 to 35-year-olds is rising in Nicaragua. The trend is most apparent on the Atlantic coast, considered a favored route of drug smugglers.

“[Nicaragua] is exactly in the middle of supply and demand,” said Nicholas Griffith, the narcotics affairs officer at the U.S. Embassy in Managua. A high volume of drugs flow through the country by ever-changing land, sea and air routes, he said, but Nicaragua “has been spared a lot of the violence, especially the ultra-extreme violence associated with cartels and gangs.”

In an effort to prevent drug use and trafficking in Nicaragua, the United States government introduced the Drug Abuse Resistance Education (DARE) program a decade ago and it is now the country’s primary drug prevention program. Nicaraguan police are trained to go into schools to teach students about the dangers of drugs and alcohol, similar to how the U.S. version is structured. More than $445,000 in U.S. funds have gone to the program in the last 10 years, reaching over 70,000 children, Griffith said, but research has not been conducted to track the effectiveness of the program for Nicaraguan students.

Trained DARE educators from the Nicaraguan police and the students in the program are encouraged to have an ongoing dialogue about drug issues.

“These are real life problems,” Griffith said. “Trafficking, gangs, all those types of topics are brought into the discussion.”

Danilo Norori, who runs the Clinic Equilibrio rehabilitation center that Aguilar is attends, said prevention and treatment of drug use in Managua is very difficult because drugs when supply is so readily available.

“It’s too easy to buy drugs in many neighborhoods,” Norori said, especially marijuana and crack. “In the last ten years there has been exponential growth.”

He described a popular way dealers will hook customers on harder drugs, selling marijuana and a small bag of crack to roll together into laced joints for about $3. Nicaragua is the second poorest country in the Western hemisphere, and about 16 percent of the country lives on less than $1.25 a day, but still people from all economic classes will find ways to pay for crack cocaine, Norori said.

With the rise in drug users there is also now a better understanding of addiction, and more and more people can acknowledge it is an illness.

“It’s not taboo because it’s common,” he said. “Most people now know someone who is involved in drugs.”

Aguilar has been clean for just 15 days, but says he is prepared to stay in the rehabilitation program as long as it takes to beat his addiction.

“I can’t be weak and go back again to drugs,” he said, listing all the relationships be wants to mend — with his family, especially his mother, and his girlfriend, whom he introduced to crack. She is also an addict now, he said, but is trying to fight her addiction on her own.

Read more coverage from the NewsHour’s trip to Nicaragua this week on our global health page, including a look at the country’s upcoming presidential election, where incumbent Daniel Ortega is poised to win an unprecedented third term.