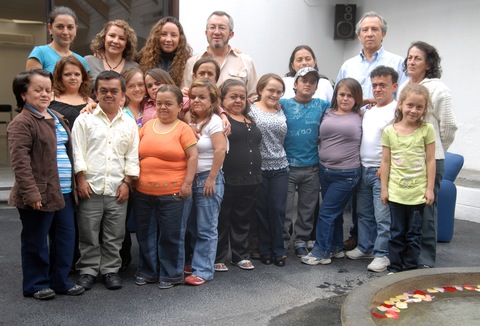 An extended family in the remote Ecuadorian Andes has been blessed, and cursed, with a rare genetic tradeoff.

Members of the family carry a gene mutation that leads to dwarfism. The mutation, which prevents the body from using growth hormones, is found in only about 300 people worldwide, 100 of whom live in Ecuador. Now, research suggests that the mutation may protect its bearers from developing age-related diseases like cancer and diabetes, according to a study published Wednesday in the journal Science Translational Medicine.

The finding adds to scientists’ growing body of knowledge about the genetics and biology of aging and could someday lead to new preventative treatments for the diseases that come with age, says Valter Longo, a geneticist at the University of Southern California and a lead author of the study.

Felipe Sierra, the director of the Division of Aging Biology at the National Institute on Aging, says that the study “confirms our strong suspicion that studying the basis of aging could give a much better payoff than studying each disease individually.”

And Nir Barzilai, the director of the Institute for Aging Research at Albert Einstein College of Medicine, who was not involved in the study, says that the new study is an “important” finding that helps further basic research into the biology of aging.

Longo has long been interested in the genetics of aging. He and others have found evidence in yeast, worms and mice that restricting growth hormones could make those creatures live longer. In one study, he was able to make yeast live 10 times as long as normal by removing a gene that is a yeast equivalent of a human growth factor gene, and by putting the yeast on a calorie-restricted diet, which also seems to reduce growth hormone levels.

In 2003, Longo teamed up with Jaime Guevara-Aguirre, an Ecuadorian endocrinologist who had been studying the family with dwarfism since 1988.

Guevara-Aguirre had diagnosed the family members with Laron syndrome, the rare syndrome caused by the gene mutation. Over the course of his years with the family members, Guevara-Aguirre noticed that the people with Laron syndrome never seemed to develop cancer or diabetes — an observation that squared with the research Longo and others had done in yeast and animals.

The scientists also brought the study into the lab, by exposing human cells in a petri dish to blood serum taken from the people with Laron syndrome. They found that those cells’ DNA were less likely become damaged than DNA in cells exposed to regular blood serum. And, when the DNA was damaged, the cells were more likely to self-destruct.

Scientists don’t know exactly why reducing growth hormones could help protect cells from damage, though Longo hypothesizes that it could be because cells must invest energy in either trying to grow and reproduce, or in protection — and, he says, most people are stuck in a “pro-growth” mode.

The study, of course, leads to an obvious question — might people someday take growth-hormone-reducing drugs to reduce their risk of cancer?

Longo says that the answer is yes, with caveats.

There is already a drug on the market, called Somavert, that blocks growth hormones and is used to treat people with acromelagy, or gigantism. Longo says he would like the drug’s manufacturer, Pfizer, to conduct clinical trials to see if the drug works for cancer prevention in people at high risk of cancer, such as smokers, who also have high growth hormone levels. However, no such human clinical trials are yet underway.

John Kopchick, an Ohio University geneticist who developed the drug that became Somavert (and who did the studies on long-lived mice) said in an e-mail that similar trials in animals had shown promise. But he cautions that he would not recommend investigating growth-factor reducing treatments in people with normal growth hormone levels, because low growth hormone levels can lead to serious side effects.

Felipe Sierra agrees, and adds that much more research needs to be done to understand the physiology behind how growth hormones affect the body and the aging process at different times in the human life cycle.