NEW YORK — The nation’s leading e-cigarette maker says it has halted store sales of some flavors to deter use by kids.

The announcement Tuesday by Juul Labs Inc. comes ahead of an expected government crackdown on underage sales of e-cigs. 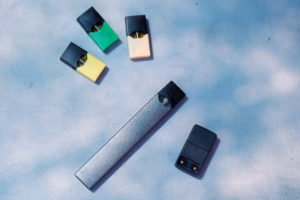 A Juul e-cigarette and pods are seen in this picture illustration taken September 16, 2018. Photo by REUTERS/Ronen Zvulun

Juul said it has stopped filling store orders for its mango, fruit, creme and cucumber pods but not menthol and mint. It will sell all flavors through its website and limit sales to those 21 and older.

The company said it was closing its Facebook and Instagram accounts and pledged other steps to make it clear that it doesn’t want kids using Juul products.

E-cigarettes are generally considered a less dangerous alternative to regular cigarettes, but health officials have warned the nicotine in them is harmful to developing brains.