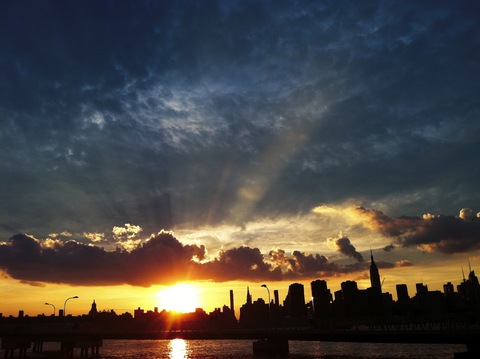 There soon will be more people over the age of 60 in New York City than schoolchildren. The city is finally taking action. Photo by Chris Protopapas.

It felt like a bad joke — worse than the one about the chicken. Whenever Ed Aarons tried to cross the road in his New York City neighborhood, he never quite made it to the other side.

As soon as the crosswalk signal said go, the 83-year-old moved quickly. “I trained myself to rush across, to give myself a certain allotted time to make it across,” he said. “And I never did it.” By the time he made it to the middle, the light would change, the cars would fly and there Aarons stood in the median, “trapped,” he said.

But that was several years ago, before New York — a place famous for its youthful buzz — paused momentarily to come to grips with the fact that it’s growing older. Today, roughly 11 percent of the city’s 8 million people are over the age of 60. By 2030, it will be closer to one in five.

And it’s not just a New York phenomenon. Pick a spot almost anywhere else in the world and the trend’s much the same. The graying of the global population is “one of the most significant historic shifts in the history of the world,” said Dr. Linda Fried, dean of the School of Public Health at Columbia University. “And we’re not planning enough. In fact, we’re barely planning.”

Barely, but there is progress. These days, the roughly 100 redesigned intersections mean that Ed Aarons has a few more seconds when he’s trying to cross some of the city’s streets. The initiative has spent millions on erecting new benches for resting and more buses for getting around. Even more recreation and education courses to help seniors exercise or learn a new skill, like how to use an iPad.

It’s thanks in large part to a group called Age-Friendly New York City, created in 2009 when the Office of the Mayor, the New York City Council and the New York Academy of Medicine realized that the city was vastly under-prepared for a future — and a very near one, at that — when there will be more elderly adults in the city than school-aged children.

On Wednesday’s PBS NewsHour broadcast, Hari Sreenivasan looks at the group’s efforts to make the Big Apple not only more accessible for elderly New Yorkers but more aware of its vast and largely under-utilized potential as customers, volunteers, employees and students.

Doing so, Fried said, would mean more opportunities for everyone. “The dirty little secret on this planet,” she told Sreenivasan, “is that anything you design that will facilitate access, engagement, safety, enjoyment and participation by older people turns out to be good for all age groups. So you are not designing just for one age group, but you are ensuring the engagement and contributions of all age groups by doing that.”

In New York, organizers say much remains to be done. No. 1: Making the notoriously expensive city more affordable for seniors. “How expensive it is to be housed in New York is a challenge,” according to Ruth Finkelstein, who leads the private sector efforts.

Tune in Wednesday for the full report.

In the meantime, check out Age-Friendly New York City’s checklist of steps every city should be taking to help its residents age with dignity, mobility and independence. Have something to add to the list? Tell us about it in the comments section below.

8 Things Your City Should Be Doing to Help Seniors, According to Age-Friendly New York City

1. Tap into the expertise of older adults.

Government cannot do it alone. Encourage public and private partners from multiple sectors to take part in the effort to be more inclusive of older adults, both as a business opportunity, and a moral imperative. Museums, theaters, grocery stores, banks, pharmacies, churches and block associations can all be leaders in creating age-friendly cities.

3. Recognize older adults as contributors to the economy.

4. Ensure that older adults know about existing opportunities and resources.

Expand and more widely publicize college and university offerings for older adults to meet the high demand of older adults looking for job training, technology classes and lifelong learning opportunities. Work with public libraries and cultural institutions to create programming that is inclusive, affordable, and accessible.

5. Adopt an “age-in-everything” approach to planning.

Redesign street intersections with the safety of older adults in mind. Focus on areas near shops and services and on areas with high rates of pedestrian injuries. Add public seating on streets in accordance with location recommendations from older adults. In addition, ensure that all municipality emergency plans appropriately address the needs of older adults, who are often disproportionately affected.

6. Advocate for improvements in public transportation.

People over 65 make up 54 percent of the national average of those who use public transit. Focus on making transportation affordable, accessible and welcoming to older passengers. Good lighting, clear signage and courteous drivers can be just as important as having infrastructure in place.

7. Increase accessibility to opportunities that promote health and socialization.