How Elizabeth Blackwell became the first female doctor in the U.S.

It was a cold, wintry day in upstate, western New York when a 28-year-old Elizabeth Blackwell received her diploma from the Geneva Medical College. As she accepted her sheepskin, Charles Lee, the medical school’s dean, stood up from his chair and made a courtly bow in her direction.

Only two years earlier, in October of 1847, her medical future was not so certain. Already rejected at schools in Charleston, Philadelphia and New York, matriculating into Geneva represented her only chance of becoming a medical doctor.

Dean Lee and his all male faculty were more than hesitant to make such a bold move as accepting a woman student. Consequently, Dr. Lee decided to put the matter up to a vote among the 150 men who made up the medical school’s student body. If one student voted “No,” Lee explained, Miss Blackwell would be barred from admission.

Apparently, the students thought the request was little more than a silly joke and voted unanimously to let her in; they were surprised, to say the least, when she arrived at the school ready to learn how to heal. 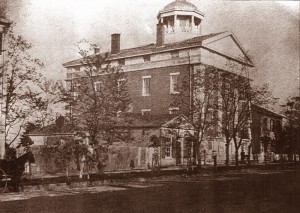 Geneva Medical College in Geneva, N.Y., was the first college to award a medical degree to a woman. Photo from Geneva Historical Society

Geneva Medical College required only a year and a half of formal lectures, and young Elizabeth found her new home to be somewhat daunting.

Too shy to ask questions of her fellow classmates or even her teachers, she figured out on her own where to purchase her books and how to study the rather arcane language of 19th century medicine.

Most medical students of this era were raucous and rude; it was not uncommon for crude jokes and jeers to be hurled at the lecturer, no matter what the subject. But with Miss Blackwell in the room, as the legend goes, her male classmates quieted down and immediately became more studious than those the Geneva faculty had taught in the past.

One of her greatest hurdles was the class in reproductive anatomy. The professor, James Webster, felt that the topic would be too “unrefined” for a woman’s “delicate sensibilities” and asked her to step out of the lecture hall. An impassioned Blackwell disagreed and somehow convinced Webster to let her stay, much to the support of her fellow students.

Nevertheless, medical school and her summer clinical experiences at the Blockley Almshouse in Philadelphia were hardly a bed of roses. Few male patients were eager to let her examine them, and not a few of her male colleagues treated her with great animosity.

Undaunted, Elizabeth persevered and gained a great deal of clinical expertise, especially in the treatment of one of the most notorious infectious diseases of the poor: typhus fever, which became the subject of her doctoral thesis.

In April of 1849, Dr. Blackwell crossed the Atlantic to study in the medical meccas of Paris and London. In June, she began her post-graduate work at the famed Parisian maternity hospital, La Maternité, and was acclaimed by her teachers as a superb obstetrician.

Unfortunately only few months later, on Nov. 4, 1849, while treating a baby with a bacterial infection of the eyes, most likely gonorrhea contracted from the infant’s mother while passing through the birth canal, Elizabeth contaminated her left eye and lost sight in it. This injury prevented her from becoming a surgeon.

She subsequently studied at St. Bartholomew’s Hospital in London. Ironically, she was permitted to practice all the branches of medicine save gynecology and pediatrics — the two fields in which she was to garner her greatest fame.

When she returned to the United States in 1850, she began practice in New York City but found it tough going, and the patients in her waiting room were few and far between. In 1853, she established a dispensary for the urban poor near Manhattan’s Tompkins Square.

By 1857, she had expanded the dispensary into the New York Infirmary for Women and Children. One of her colleagues there was her younger sister Emily, who was the third woman in the U.S. to be granted a medical degree.

She was also an avid writer whose by-line attracted many readers on a wide range of subjects, including advice to young girls and new parents, household health, medical education, medical sociology and sexual physiology.

Dr. Blackwell returned to London a number of times during the 1860s and 1870s and helped establish a medical school for women, the London School of Medicine for Women, in 1874-5.

She remained a professor of gynecology there until 1907, when she suffered serious injuries after falling down a flight of stairs.

Dr. Blackwell died only a few years later, in 1910, after suffering a paralytic stroke at her home in Hastings, East Sussex, England. Her ashes were buried at St. Munn’s Parish Church in Kilmun, Argyllshire, Scotland.

Most often remembered as the first American woman to receive an M.D. degree, Dr. Blackwell worked tirelessly to secure equality for all members of the medical profession. Many might argue we still have a long way to go.

Left: Portrait of Elizabeth Blackwell, the first woman doctor in the United States. Photo from the National Library of Medicine