When the German physicist Wilhelm Conrad Röntgen’s announced his discovery of the x-ray in December of 1895, he was lauded on the front page of just about every newspaper in the world. Indeed, many journalists called this phenomenon “X-Ray Mania.” 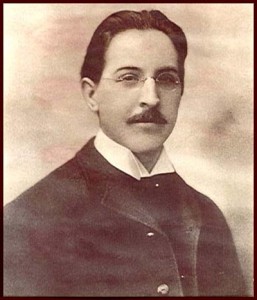 In the months and years that followed, inventors like Thomas Edison set out to manufacturing X-ray fluoroscopes, shoe stores used X-rays to measure the size of their customers’ feet, and carnival barkers hawked them as novelties for fairgoers who eagerly purchased “radiographs” of their bones. Most importantly, physicians began to figure out ways to apply this earthshaking discovery to the diagnosis and treatment of a host of serious illnesses that had long plagued humankind.

One of the first Americans to use X-ray radiation to treat cancer was a Chicago chemist and homeopathic physician named Émil Grubbé (1875-1960). The patient, Rose Lee, was a 55-year old woman suffering from the recurrence of inoperable breast cancer.

Grubbé graduated from the Hahnemann Medical College, a homeopathic medical school, in 1898. But in 1896, he was earning his living as a chemist and assayer. As part of his work, he often tinkered with the latest electronic gadgets of the day, such as Crookes tubes, induction coils, electric generators and fluorescent and photographic chemicals and plates. Included in many of the newspaper accounts of the discovery of X-rays were precise drawings of Röntgen’s apparatus. Grubbé had all of these devices, including the important Crookes tube, on his workbench. As a result, he was able to reproduce Röntgen’s work and set out to make his own “radiographs,” or x-rays, on photographic plates.

Like many a scientific investigator of this era, Grubbé was his own “guinea pig.” Every day for two weeks, he took numerous x-rays of his left hand. At this point in time, however, no one yet understood just how dangerous the overexposure to x-rays was — and is — to human tissue.

As a result of his experiments, Grubbé developed severe burns on the back of his hand. On Jan. 27, 1896, he consulted his medical professors at Hahnemann. The homeopathic doctors were astounded by the physical damage the x-rays caused to Grubbé’s hand. But Grubbé’s “Eureka moment” came when J.E. Gilman, one of the doctors he consulted that day, observed: “any physical agent capable of doing so much damage to normal cells and tissues might offer possibilities, if used as a therapeutic agent, in the treatment of pathologic conditions in which irritative, blistering, or even destructive effects might be desirable”.

According to Grubbé’s memoirs, one of the other professors present was Dr. Reuben Ludlam. He was the doctor of record treating Rose Lee. She was suffering from a recurrence of her breast cancer after a radical mastectomy. A metastatic tumor had developed within her chest wall. At this point in medical history, long before effective radiation therapies and anticancer drugs, cases like Mrs. Lee’s were horrible affairs, accompanied by bleeding, foul-smelling, painful ulcers and festering infections.

Desperate for a cure or, at least, an extension of her imperiled life, Lee agreed to Grubbé’s suggestion of radiation therapy and the first treatment commenced at 10 a.m. on Jan. 28. Placing lead sheets around the breast to shield the rest of her chest, Grubbé suspended a Crookes tube three inches above the malignant tumor. The X-rays were administered for about an hour — a shockingly long time compared to modern day radiation oncology protocols. Grubbé repeated this therapy several more times over the next 17 days.

On Jan. 29, Grubbé later claimed to apply the new radiation therapy to a man named “Mr. A. Carr” who suffered from ulcerous lupus vulgaris (a tuberculosis infection of the skin) on his face and neck. Carr underwent several one-hour exposure treatments through mid-February.

Both patients are believed to have died within a month of their treatments. Rose Lee died of malignant cancer. Carr was said to have shuffled off this mortal coil after falling off an elevated sidewalk in Chicago.

But here is where historical matters become interesting if not downright muddled. Grubbé did not publish these accounts or claim credit for his medical accomplishments until the early 1900s. And when he finally did announce it, members of the medical community heatedly contested Grubbé’s assertions. Moreover, a number of other doctors claimed they deserved the credit for discovering “radiation therapy.” When asked what took him so long, Grubbé explained that he did not report these patients in the medical literature earlier because he was not yet a doctor when the treatments occurred. But this hardly explains why he did not publish the cases immediately after he received his homeopathic degree in 1898, unless, as he sometimes added, he was worried about the criticism he might receive from “regular,” or allopathic, medical doctors. Yet given how many homeopathic physicians were in active practice in the United States at this time, this exculpatory explanation seems a bit hard to swallow.

No historian has yet been able to find a death certificate for either Lee or Carr, despite extensive searches in the warehouse containing the Cook County death certificates for 1896 and 1897. On the other hand, an FBI analysis determined that the patient notes on their cases, which Grubbé discovered among his papers in the early 1930s, appear to have been written at the turn of the 19th century.

That said, Dr. Grubbé did develop a large and successful X-ray clinic in Chicago, and enjoyed a hugely successful, albeit contentious, career. Sadly, his frequent unshielded exposures to radiation left him with a number of health problems requiring more than 100 surgical operations and amputations.

Recalled by some as flamboyant and colorful and by others mean-spirited and bitter, Grubbé spent a great deal of time and money seeking credit as the “father of radiation therapy.” When Dr. Grubbé died, he bequeathed his fortune and medical library to the University of Chicago with the stipulation that someone there write his biography and memorialize his career. The chairman of radiology at the university, a distinguished and judicious physician named Paul Hodges, dutifully took on the task and discovered that the more he learned about Grubbé, the less he liked him. The result is a balanced but often critical tome published by the University of Chicago Press in 1966. Dr. Hodges later advised a historian interested in Grubbé’s work: “if you’re going to be fool enough to leave your money to have your biography written, then try to lead an exemplary life. Failing that, for God’s sake, remember to tell your lawyer to stipulate that it be a positive biography.”

To this day, Grubbé’s place in medical history is often challenged, if not outright ignored.

Was Émil Grubbé the first doctor to employ radiation therapy? This, alas, is a difficult question to definitively answer and it seems unlikely we will ever have the precise answer with respect to his claims of primacy.

One thing that has become all too clear during my too many years of practice as a historian of medicine, is that whenever someone claims to be first to do anything, there is always another person who has evidence or a claim that he or she was “firster.” Perhaps the better part of valor is to say that if Grubbé was not the first doctor to employ radiation therapy for cancer, he was, at least, among the first.

Left: A breast cancer patient undergoes radiation treatment at a hospital in Tegucigalpa. Since the discovery of the x-ray in 1895, physicians have tried to figure out ways to use it in the diagnosis and treatment of a variety of illnesses, including cancer. Photo by Jorge Cabrera/Reuters