A major insurer said recently it would offer life insurance to HIV-positive people because of their rising life expectancies, prompting cheers from AIDS activists. But on the very same day, the nation’s top disease control official described an America falling far short in its fight against AIDS.

It might seem a jarring disconnect — but it reflects very different realities dividing the estimated 1.2 million Americans living with HIV/AIDS.

While life expectancies are approaching the national norm among white, affluent gay men, about 66 percent of the 1.2 million people living with HIV/AIDS in the United States are not in treatment, imperiling their health and at risk for infecting others.

African-Americans, mostly gay or bisexual men, account for nearly half of the approximately 45,000 Americans infected with HIV each year. Both African-Americans and Latinos are less likely to remain in treatment than whites. Compared to white men, African American men were more than seven times and Latino men were almost twice as likely to die from HIV-related complications.

HIV/AIDS advocates and physicians say that despite the significant medical advances in treating the disease, many patients are being left behind because of their life circumstances. Groups that once held angry demonstrations against government agencies and pharmaceutical companies to speed access to affordable, life-saving HIV medications now emphasize the socioeconomic barriers that keep some people living with HIV from consistently obtaining and using those drugs to remain healthy.

“There is an extreme disparity when it comes to treating HIV and AIDS,” said Anthony Hayes, managing director of public affairs and policy for GMHC, formerly Gay Men’s Health Crisis.

“It’s critical, when we talk about ending the epidemic, to not just to talk about the science. These are people who are incredibly vulnerable as it relates to all aspects of society. In contrast, more affluent HIV positive people — specifically gay white men — are able to access care, they have jobs, they have homes, they have access to life’s basic necessities that many do not.

“It’s very hard to talk about HIV prevention with someone who is homeless or someone who isn’t sure where they’re going to find their next meal.” 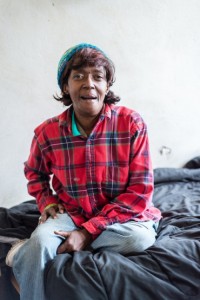 Loren Jones, 63, at her apartment in Berkeley, Calif. Jones was homeless when she was diagnosed with HIV. (Heidi de Marco/KHN)

It’s not a simple matter of financing care for those who can’t afford it. Treatment and social services are currently available for low-income and uninsured or underinsured patients under the Ryan White Act. Once long waiting lists for free HIV medications have virtually been eliminated. But basic survival – money to live, a place to sleep — often takes precedence over seeking help and closely managing a disease that can be symptom-free in its early stages, doctors say.

Loren Jones, 63, of Berkeley, Calif., was homeless when she was first diagnosed with HIV about 30 years ago. And for many years she wasn’t symptomatic, so her diagnosis was rarely at the top of her list of worries, Jones said. “It actually sinks to the bottom. HIV becomes another thing on your, like, to-do list.”

Jones eventually was able to find a government-subsidized studio apartment in Berkeley and qualify for Social Security disability benefits. She recently had a bout with eczema, a serious skin rash that can be a marker for the progression of HIV-related disease. Her blood pressure spiked, leading to discovery of kidney disease, a common complication of HIV.

With her health problems now coming to the fore, she is finally receiving HIV treatment.

Newer approaches to controlling HIV/AIDS focus on a “continuum of care,” from the very beginning. Federal health official are trying to track improvements or setbacks at every stage: testing, linking the newly diagnosed to care within three months, getting HIV-positive people to remain in treatment, prescribing them antiretroviral drugs, and suppressing HIV viral load – the amount of HIV in the blood – to a very low level.

People fall out of care at every stage, with minorities generally faring worse than whites. The the goal is to keep them in treatment, not only for their sake but because research has shown that people with low or undetectable viral loads are far less likely to transmit the disease to others. 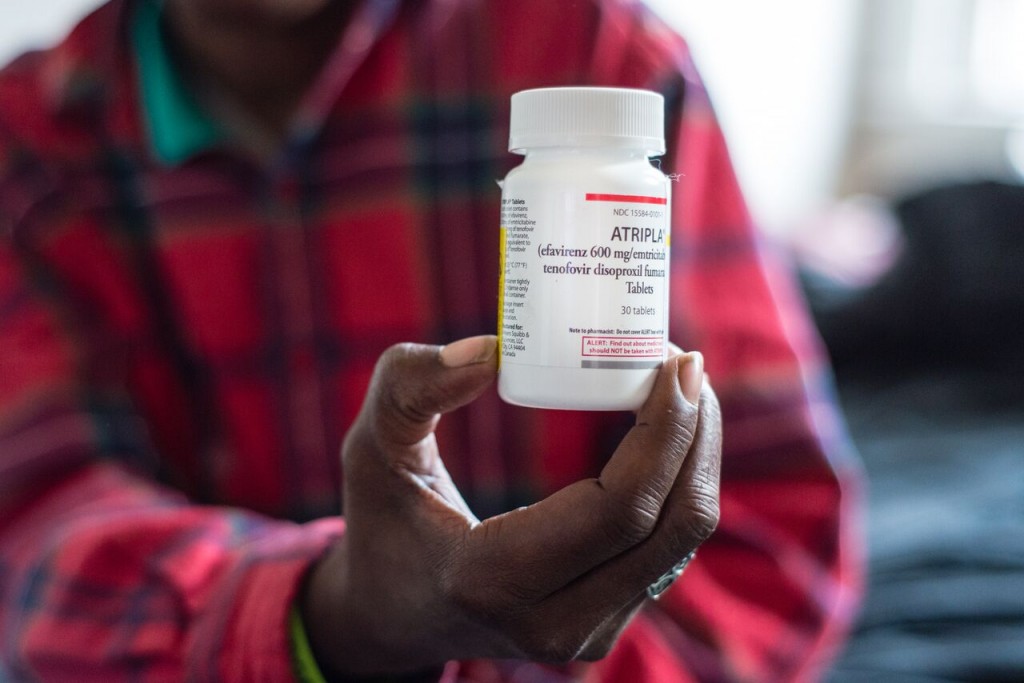 Jones can now afford to take antiretroviral drugs to suppress her HIV viral load. “You have to be a hustler for your own health,” she said. (Heidi de Marco/KHN)

Dr. Edward Machtinger, professor and director of the Women’s HIV Program at the University of California, San Francisco, said his clinic has been able to achieve viral suppression in up to 80 percent of its patients. But the focus on biomedical treatment of their HIV obscures the deep challenges many of his patients face: poverty, domestic abuse, addiction, mental illness, he noted.

“Complex trauma is what led many of my patients to get HIV in first place and gets them to remain depressed, stay addicted and have trouble adhering to their meds,” Machtinger said. “Medicine and HIV primary care has not considered these health issues to be in their domain and their responsibility. I’ve heard many clinicians brag about having patients on crack be undetectable in their viral load, as if HIV was going to kill them in the first place. It’s not. Crack is going to kill them.”

Addressing HIV patients’ social and economic challenges — often referred to as “social determinants of health” — is complicated and not reimbursable, Machtinger said. “What we really need to do is find a way for patients to be safer, more empowered and healthy.”

“They’re trying to survive outside — to get housing, to get a job. We just don’t have a system that’s designed for people who have those kinds of issues. It’s designed for well-educated, well-informed consumers in a market type system,” Cunningham said. “It’s the context of people’s lives that is just so difficult that HIV is not their biggest problem. We haven’t come up with any kind of magic bullet, but at the very least, we need to focus on these social barriers to a greater extent.”