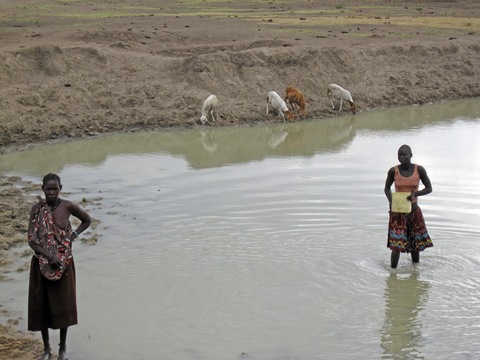 Poverty rarely gets more degrading than when people are forced to drink from the same muddy ponds as livestock and wild animals. Yet this was a common scene on my most recent visit to Southern Sudan and rural Ethiopia.

It’s not surprising that these are some of the last places on earth still plagued by dracunculiasis, better known as Guinea worm. This crippling water-borne parasite is among a group the World Health Organization calls neglected diseases, overshadowed in a public health realm where pressing infectious threats like HIV or malaria draw more attention and funding. The Atlanta-based Carter Center has focused on neglected diseases–Guinea worm, river blindness, schistosomiasis and filariasis (elephantiasis) in part to fill the void of attention.

Yet, the Guinea worm campaign may be instructive in a much broader context of how to approach development work, how to tackle poverty entrenched by myriad circumstances and nuances. That’s because it is on the cusp of creating history by eradicating the first disease since small pox in the 1970s. Only 2,500 cases are reported annually, down from 2.5 million, says former President Jimmy Carter.

The campaign was an early adopter of what is spreading as the new mantra in aid work: a collaborative rather than a top-down “we know how to fix your problem” approach that has historically prevailed–and never fixed the problem, says Don Hopkins, the Carter Center physician and epidemiologist who has led the campaign.

People are very, very astute at picking up condescension and unfortunately there’s a lot of that, especially with Westerners coming into the countries,” Dr. Hopkins told me.

In the Carter Center’s approach, indigenous belief systems were respected, explains former-President Carter. For example, a village pond may be nothing more than a source of Guinea worm larvae to a public health professional but to the local community its water is sacred, without which life would not exist. No surprise, then, that there was resistance to chemical spraying to kill the larvae. So the Guinea worm campaigners incorporated such beliefs into their message to the community: the pond is sacred but it is under a curse that is bringing this terrible disease. Let’s work together to remove that curse.

Carter’s personal involvement and his ability to command attention from country leadership has been a valuable asset, says Hopkins. But so has a sense of pragmatism, a willingness to proceed incrementally, he adds.

Hopkins recalls criticism the Center endured for distributing cloth filters to keep guinea worm out of water they were drawing from contaminated open ponds. They were seen as detracting from the real solution: borehole wells or a cleaner source of water, which would eliminate not just guinea worm but numerous other diseases. However, he said such solutions are slower and far more expensive and should not hold hostage the things that can be done right away.

“If it’s bad to have diarrhea, its worse to have diarrhea and Guinea worm disease,” Hopkins added. Getting rid of the latter restores considerable productivity–farmers can return to farming, kids to school and the community can start to tackle its other challenges.

“Don’t let the perfect be the enemy of the good,” said Hopkins.

You can watch Fred de Sam Lazaro’s report from Sudan on Wednesday’s NewsHour.