F. Scott Fitzgerald’s life was a study in destructive alcoholism

This is a red-letter week for American literature because it marks the debut of F. Scott Fitzgerald’s masterpiece, The Great Gatsby in 1925. The book was published by Charles Scribner’s Sons and both Scott and his editor, the legendary Max Perkins, hoped the book would sell 75,000 or more copies. The reviews were mixed and six months later only 20,000 had been sold. The remaining copies were boxed and warehoused.

Fitzgerald went to his grave thinking his work was forgotten and irrelevant. Thanks to the twenty-twenty vision of hindsight, we now know nothing could be further from the truth. Beginning with its re-discovery in the early 1950s, The Great Gatsby rose to become Scribner’s best-selling title. It has sold more than 25 million copies all over the world and each year sells more than 500,000.

But what does that have to do with great moments in medicine?

A badly recovering alcoholic, Fitzgerald drank and smoked himself into a terminal spiral of cardiomyopathy, coronary artery disease, angina, dyspnea, and syncopal spells.

Bear with me as I provide a bit of context. For decades, I have taught Fitzgerald’s life and works to my students with the express purpose of using his life to demonstrate how deadly the diseases of alcoholism and addiction can be. I even once wrote about Scott’s struggles for the Journal of the American Medical Association, in 2009, to alert my medical colleagues of his sad but instructive story.

Let’s begin at the end. On December 21, 1940, Scott Fitzgerald dropped dead after eating a chocolate bar and reading the Princeton Alumni Weekly magazine. He was resting a bit before going back to writing his novel about Hollywood’s Dream Factory, an unfinished task we know as The Last Tycoon. At about 2:00 PM, he got out of his easy chair, began to struggle for breath as he clutched his pained chest, and hung onto the mantelpiece of his apartment’s fireplace for support. Soon after, he fell to the carpet with a thud. He was only 44.

A badly recovering alcoholic, Fitzgerald drank and smoked himself into a terminal spiral of cardiomyopathy, coronary artery disease, angina, dyspnea, and syncopal spells. He had already had a mild heart attack, in October of 1940, outside Schwab’s Drugstore on Sunset Boulevard.

The evening before he died, Scott went to the movies. Before the closing credits, however, he felt crushing chest pain and needed help in getting out of the theater and home to bed. 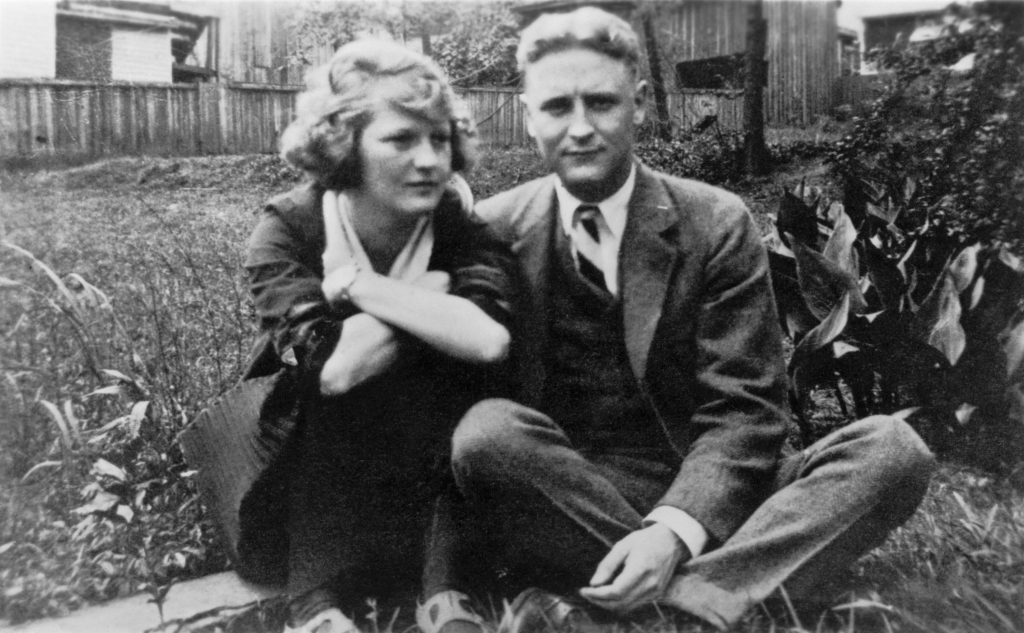 Zelda Sayre and F. Scott Fitzgerald in the Sayre home in Montgomery, Alabama, in 1919. The following year they would marry. Photo via Getty Images

In many ways, his end was all but predestined thanks to a strong family history for alcoholism; a personality marked by excessive risk taking, reckless behavior and what he called “a two-cylinder inferiority complex”; and a dizzying series of emotional traumas—most notably his wife Zelda’s descent into madness.

Fitzgerald was already drinking to excess by the time he matriculated into Princeton in 1916. His problem only grew worse with each passing year. Throughout his life, Scott made a drunken fool out of himself at parties and public venues, spewing insults, throwing punches, and hurling ashtrays—behaviors followed by blackouts and memory loss.

Predictably, his excessive drinking sapped his health and creative energy. As he told his editor, Max Perkins, in 1935:

It has become increasingly plain to me that the very excellent organization of a long book or the finest perceptions and judgment in time of revision do not go well with liquor. A short story can be written on a bottle, but for a novel you need the mental speed that enables you to keep the whole pattern in your head and ruthlessly sacrifice the sideshows. . .

Between 1933 and 1937, Scott was hospitalized for alcoholism 8 times and thrown in jail on many more occasions. In February, March, and April 1936, Scott confessed the details about his breakdown on the high-profile pages of Esquire magazine. He titled them The Crack-Up. In an era when the admission of alcoholism was still considered a weakness of character, Scott’s public mea culpa was more than an act of candor or bravery; it was tantamount to professional suicide.

In 1937, Fitzgerald somehow wrangled a job as a contract writer for the fabled Metro-Goldwyn-Mayer (MGM) studios. Chain smoking and stuffing himself with fudge, chocolate bars, and sugary soda pop, an alcohol-starved Scott simply could not master the art of screenwriting by committee. His gorgeous prose just did not translate all that well to the staccato rhythm of the silver screen. He rebelled against the system by getting drunk.

Scott’s MGM contract was not renewed and he tried freelancing at some of the other studios. Too many times, he did what chronic alcoholics often do: he relapsed.

Struggling to abstain from liquor, Scott worried about his finances, precarious health, and the education of his daughter Scottie. More than once, friends suggested he join a sobriety support group that had been founded by a stockbroker named Bill Wilson and a physician named Bob Smith in 1935. It was called Alcoholics Anonymous. Scott’s response was both contemptuous and, ultimately, self-defeating:

I was never a joiner. AA can only help weak people because their ego is strengthened by the group. The group offers them the strength they lack on their own.

Instead, Scott chose to go it by himself, hoping that willpower alone would free him of his addiction. Despite periods of weeks to months “on the wagon,” the binges never really stopped, and each one took a greater toll on Scott’s battered brain and body. One time, he boasted of tapering his gin consumption but was still drinking 37 beers a day. In late October 1939, a few weeks after a disastrous drunken spree, Fitzgerald wrote his daughter Scottie a self-eulogy of sorts:

Anyhow I am alive again—getting by that October did something—with all its strains and necessities and humiliations and struggles. I don’t drink. I am not a great man, but sometimes, I think the impersonal and objective quality of my talent, and the sacrifices of it, in pieces, to preserve its essential value has some sort of epic grandeur. Anyhow after hours I nurse myself with delusions of that sort.

Fourteen months later, F. Scott Fitzgerald’s body was placed on view in the William Wordsworth Room of the Pierce Brothers Mortuary in Los Angeles. The undertakers expertly colored Scott’s gray hair back to its golden brown and disguised the wrinkles that marred a profile once admired by millions. Scott’s hands, however, told a more accurate tale of too much alcohol and unhealthy living; they were as withered and frail as those belonging to an old man.

One of the few mourners to pay her respects was the Algonquin Round Table wit, poet, screenwriter, and alcoholic Dorothy Parker. She alternately praised Scott as her generation’s greatest novelist and roundly criticized him as a “horse’s ass.” Softly, under her breath, the bereaved and tipsy poet whispered, “The poor son-of-a-bitch.” Those who subsequently heard about the remark assumed Parker was making one of her famously inappropriate, sharp comments. In fact, she was quoting a line that appears near the end of The Great Gatsby. It was first uttered by the character “Owl-Eyes,” as he stood over the coffin of Jay Gatsby.

Every morning during those sad, last years of his life, Scott awoke with the hope that he could tell his alcoholic demons to scram. Some days he enjoyed a modicum of success in that task; there were still many more, however, when he reached for a drink, and then another, sliding closer and closer to his grave. Fitzgerald, after all, was the man who famously observed, “The test of a first-rate intelligence is the ability to hold two opposed ideas in mind at the same time and still retain the ability to function.”

In retrospect, a better passage for Mrs. Parker to have recited while standing over Scott’s silent body would be the last luminous lines of his Long Island literary masterpiece:

Gatsby believed in the green light, the orgiastic future that year by year recedes before us. It eluded us then, but that’s no matter—tomorrow we will run faster, stretch out our arms further. . . . And one fine morning—So we beat on, boats against the current, borne back ceaselessly into the past.