FDA to America: How much Nutella do you eat?

The Food and Drug Administration is asking the public to reflect on an important health question: How much Nutella do you actually eat?

The agency is gathering information on the amount of Nutella that constitutes a reasonable serving size at the behest of Ferrero, the maker of the spread. Ferrero has been petitioning the FDA for the past two years to put Nutella in the same regulatory class as jam or to establish an entirely new category for “nut cocoa-based spreads.”

Currently, Nutella is classified as a dessert topping, like chocolate syrup. That means its labels get slapped with a serving size of 2 tablespoons. Each serving totals 200 calories — half of which are from fat — and packs 21 grams of sugar.

But the Italian company said the classification is based on an outdated survey of 157 “primarily female” shoppers who said they largely used the product on ice cream. The survey was conducted in 1991. 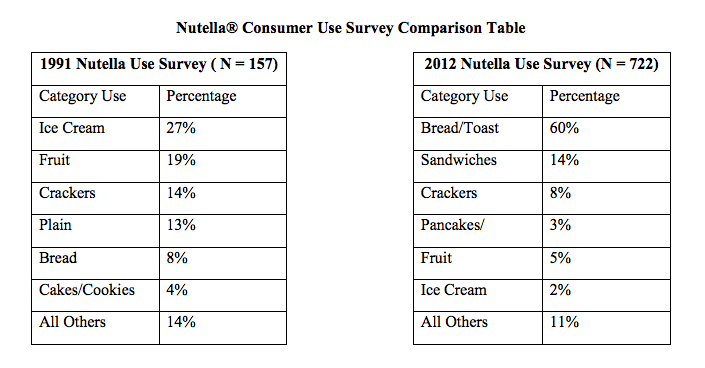 Now, Ferrero said 60 percent of Nutella consumers are slathering the product on toast. The company wants that serving size changed to 1 tablespoon, as is the case with jams and jellies (though similar products like peanut butter have 2-tablespoon servings).

That change would come with the added benefit of making Nutella look as though it has fewer calories, as well as less sugar and fat, when customers take a quick glance at the nutrition label.

“Consumers may falsely believe they should be applying two tablespoons of Nutella on their bread rather than the one tablespoon that is more customarily consumed,” Ferrero warned in its petition.

The FDA said it recognizes the need for a sweet new category and is taking the first step by inviting public comment.

Respondents have 60 days to count their spoonfuls.

This article is reproduced with permission from STAT. It was first published on Nov. 1, 2016. Find the original story here.

Left: The FDA is gathering information on the amount of Nutella that constitutes a reasonable serving size. Photo by kettenkarussell