For Some Young Men, a Dangerous Age for Mental Illness 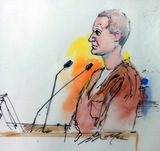 The shooting has, once again, focused attention on a young man with possible mental illness who slipped through the cracks. But why is it that so many of these perpetrators are young men?

The first signs of severe mental illness often appear in adolescence and early adulthood, doctors say. Schizophrenia, for example, is usually diagnosed in men in their late teens to mid-20s, and in women about five years older.

Researchers don’t know exactly why that’s true, though many believe a combination of biological and social factors come into play.

“Certainly it’s a time of considerable stress and transition for most young adults,” says Dewey Cornell, a University of Virginia forensic clinical psychologist who studies youth violence. “Particularly if they are not settled in terms of their future occupation, their family relationships … it can be a very unsettling time.”

It’s a time of transition for the brain as well, according to Mark Olfson, a clinical psychiatrist at Columbia University who has studied the prevalence of mental health disorders among young adults. Recent research has shown that the brain undergoes major changes — in neural connections and organization — during the teens and early 20s, and scientists believe that could help explain why some severe mental illnesses become apparent then.

“One thing we do know is that this is not specific to a particular society. We see the same patterns here and in other countries,” Olfson says.

Of course, mental illness is only part of the picture. Very few people with severe mental illness, such as schizophrenia, become violent.

“There has been much speculation in the media about the mental health of the shooting suspect,” Carol Bernstein, president of the American Psychiatric Association, said in a statement.

“However, it’s important to recognize that having a mental illness does not increase one’s likelihood of committing violence against others. The vast majority of individuals living with mental illness are not a threat to others.”

In an article in Slate Tuesday, neuropsychologist Vaughan Bell wrote about research that suggests that “psychiatric diagnoses tell us next to nothing about someone’s propensity or motive for violence,” and that substance abuse is a much more relevant factor.

Psychologist Dewey Cornell says that there’s a “concordance of two trends” at work in the fact that young men commit so many of these horrific, headline-grabbing murders. One is the fact that mental illness often emerges at that age. But the other is that the peak age for violence, in general, occurs at that age.

“You can look at crime statistics anywhere, and find that men are far more likely to commit aggressive acts than then than at any other time in their life,” he says. “Most individuals who suffer from mental illness are not especially violent. But the combo of mental illness, and substance abuse, and being male, does seem to be a particularly dangerous combination.”