At GOP retreat, still searching for ‘repeal and replace’ consensus

PHILADELPHIA — Republicans from the House, Senate and White House gathered in Philadelphia this week searching, among other things, for some agreement on how exactly to “repeal and replace” the federal health law. By the end of the second day of the three-day retreat, however, it was clear they were not yet singing from the same hymnbook.

House and Senate Republican leaders did seem to settle on a timing strategy for overhauling the Democrats’ health care law that could take them through the summer, even if they were light on specifics.

“We don’t want to set arbitrary deadlines on things,” said House Speaker Paul Ryan, R-Wis. “We want to move quickly, but we want to get things right.”

Rank-and-file Republicans said they are coalescing around a strategy that would not have a single replacement for the Affordable Care Act. Instead they foresee a combination of changes they can make to the law through a budget bill that only requires 51 votes in the Senate, regulatory action and executive orders by the Trump administration, and individual bills addressing smaller aspects of the health system that will follow later.

“If you’re waiting for another 2,700-page bill to emerge, you’re going to have to wait until the sun doesn’t come up, because that’s not how we’re going to do it.”

“If you’re waiting for another 2,700-page bill to emerge, you’re going to have to wait until the sun doesn’t come up, because that’s not how we’re going to do it,” Rep. Greg Walden, R-Ore., who is the chairman of the House Energy and Commerce Committee, told reporters, referring to the length of the Affordable Care Act. “There’s no single fix. There’s no single plan.”

Some of the individual bills Blackburn mentioned are those Republicans have pursued for years, such as allowing health insurance to be sold across state lines and capping some damages in medical malpractice suits in an effort to deter doctors from practicing “defensive medicine” to avoid being sued. Rep. Tom Price, R-Ga., whom Trump has nominated to run the Department of Health and Human Services, has been a leading advocate of some of these GOP proposals.

According to the budget resolution passed by both chambers earlier this month, House and Senate committees were supposed to finish work on their partial-repeal bills by Jan. 27. That will not happen, as none of the committees in question has even begun work yet.

And Senate Majority Leader Mitch McConnell, R-Ky., said he was pleased that the House has recognized that the Senate will move more slowly due to its other obligations to vet and vote on President Donald Trump’s nominees for the cabinet and other posts.

“What the speaker has done, which I entirely concur with and the administration is on board with, is to lay out a game plan through the August recess of what we want to try and accomplish,” McConnell told reporters.

While the members of Congress insisted that they were on the same page as Trump, that was not clear from the speeches delivered by the president and Vice President Mike Pence Thursday.

But while the members of Congress insisted that they were on the same page as Trump, that was not clear from the speeches delivered by the president and Vice President Mike Pence Thursday.

For his part, the president stuck to his desire for legislation sooner rather than later. “We have to take care of the American people immediately, so we can’t wait,” he told the group.

Pence reiterated the idea that overhauling and replacing the law needs to be done at the same time. “President Trump has made it very clear: We need to end this law’s burden on hard-working families and business, and simultaneously replace it with a better plan, based on free-market principles and choice,” he said, according to the pool report of the speech, which was not open to the media and not broadcast.

And it remains unclear if the Trump administration will submit its own plan or let Congress work its will. “I’ll leave that up to them to announce,” Walden said.

Meanwhile, in a light rain, a group of several thousand protesters marched to within a block of the hotel in the center of the city where the Republicans were meeting, chanting “Philly hates Trump,” and “Facts are facts and lies are lies.” 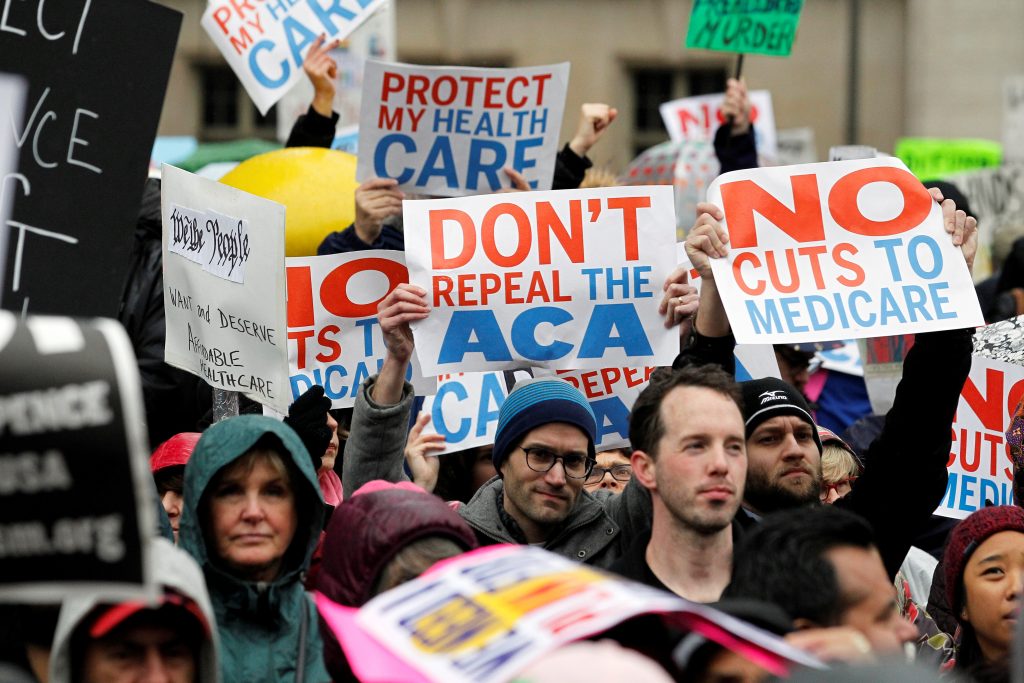 Demonstrators hold signs in support of the Affordable Care Act near the hotel where House and Senate Republicans are attending a retreat in Philadelphia. Photo by REUTERS/Tom Mihalek

Among the marchers were patients who have benefitted from the health law and don’t want to see it disbanded.

“‘If they take away the ‘You can’t be turned down for having a pre-existing condition,’ I will probably not be able to get health insurance,” said Nancy Lowell, 58, a food service manager from Philadelphia who was diagnosed with cancer last year.

Lowell, who said her cancer was treated with surgery, fears losing her insurance because “I still have to get a high resolution MRI annually, and without insurance that costs over $11,000. Just that one test.”

And 31-year-old Andrea Tsurumi, a freelance illustrator also from Philadelphia, said she “doesn’t know” what she will do if the law no longer offers her affordable coverage.

She said the availability of the insurance without employer-provided coverage enabled her to become an illustrator in the first place. “I’m terrified I’m going to have to give up my profession and find some sort of job to provide health care for my family,” she said.

Left: Rank-and-file Republicans said they are coalescing around a strategy that would not have a single replacement for the Affordable Care Act. Instead they foresee a combination of changes. Photo by REUTERS/Mark Makela