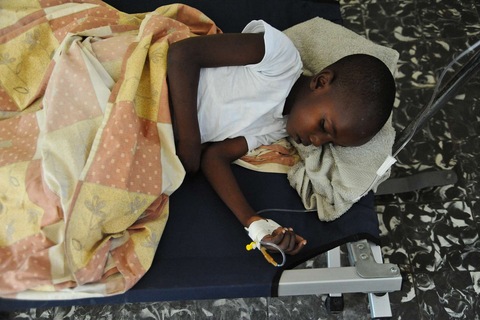 A tropical storm bearing down on Haiti threatens to make daily life more miserable for tens of thousands homeless still living in tent camps and could deepen the cholera epidemic that has already killed more than 5,800.

Tropical Storm Emily was on a path toward the Dominican Republic and Haiti Wednesday, and forecasts predicted heavy rains and possible flooding — perfect conditions for the spread of water-borne diseases like cholera.

“[The weather service] is talking about possibly 10 inches in Haiti. That’s a huge amount of water,” said Julie Sell, spokesperson for the Haiti mission at the American Red Cross. “In a country where people are frequently using the same water sources to bathe, [such as] as a toilet, and to drink, the last thing you want is standing water.”

About 389,000 Haitians have been sickened since the outbreak began in October 2010, according to the Pan American Health Organization. Just as health workers thought new cases were stabilizing this spring, heavy rains in June caused a second spike.

The number of cases in some regions doubled, and the need for hospitalized care increased 79 percent in and around Port-au-Prince.

A tropical storm is dangerous for many reasons in Haiti, where tens of thousands of people are still living in tent camps more than a year and a half after a massive earthquake on January 12, 2010. The rainy conditions make containing sewage to specific areas very difficult, and cholera bacteria thrive in poor sanitation conditions.

As part of an ongoing disaster preparedness program implemented after the earthquake, the Red Cross has been hiring local teams to dig drainage ditches and sandbag hillsides near camps and affected communities. These efforts are meant to help prevent flooding and mudslides during the annual rainy season, but they now will serve the dual purpose of moving water and preventing disease.

Sell said the organization is prepared to treat more cholera cases as well, including supplies of re-hydration salts that can save the lives of severely dehydrated patients. While groups like the Red Cross and Partners in Health have had to scale up their cholera response, others have had to leave Haiti entirely.

“There are some aid organizations that have had to pull out of Haiti or dramatically reduce their activities due to lack of funding. That’s been a concern for the Haitians,” Sell said.

Paul Farmer, co-founder of Partners in Health, talked to Ray Suarez about the problem last week on the NewsHour.

“We feared back in January right after the quake, that there would be some groups that would come in and out, and part of what has been called the crisis caravan, that all came to pass,” he said. “They have come in. They’re gone.”

The epidemic has also spread beyond Haiti’s borders to the Dominican Republic, where it has sickened 13,200 and killed 87. This week, the Centers for Disease Control also released a report linking 23 cases of cholera in the United States to the strain from Haiti.

All of the patients in the United States had recently traveled to Hispaniola, except for one who had eaten conch brought home by family visiting Haiti, and were successfully treated with antimicrobials and re-hydration.

“The risk for cholera transmission in the United States is low because of improved water and sanitation, and there is no evidence of secondary transmission,” the authors wrote.

But, the authors warned, “until cholera in Haiti and Dominican Republic resolves,” health workers in the United States need to be prepared to handle more cases.

Editor’s note: An earlier version of this post incorrectly reported the date of the January 12, 2010 quake.