Happy birthday to the woman who revolutionized endocrinology

Dr. Yalow was a medical physicist who co-discovered the radioimmunoassay, an exquisitely sensitive means of using “radioactive tracers” to measure hormones in the bloodstream, such as insulin, thyroid, reproductive and growth hormones, as well as levels of vitamins, viruses and many other substances in the body.

A sample size of only a few drops of blood is required to make these critical determinations, which not only saved lives and guided medical care but was also used, for example, to prevent mental retardation for thyroid hormone deficient babies still in the womb. For decades it has been a major tool in clinical medicine and medical research. Indeed, her work revolutionized the field of endocrinology, the study of diseases of hormonal systems.

Yalow’s origins were humble and she conducted her entire life and career with humility and grace. She was born in the Bronx on July 19, 1921, to an immigrant mother and a father from New York’s Lower East Side, neither of whom completed high school. In 1941, at age 19, Yalow graduated magna cum laude from Hunter College, the all-women’s college of the tuition-free City University of New York, majoring in physics. Initially fascinated by chemistry, she became attracted to physics after reading Eve Curie’s 1937 biography of her famous mother, Madame Marie Curie, who studied the effects of radioactivity and won the Nobel twice (for physics in 1903 and chemistry in 1911).

Gaining acceptance into graduate school, however, was no easy task. As the New York Times reported in Yalow’s obituary on June 1, 2011, when one of her Hunter professors recommended her for a graduate assistant’s position in physics at Purdue University, a skeptical physicist wrote back, “She is from New York. She is Jewish. She is a woman. If you can guarantee her a job afterward, we’ll give her an assistantship.”

There was no guaranteed job and the position at Purdue fell through. That now-forgotten physicist at Purdue had no clue regarding the mettle of this courageous and determined woman. Yalow subsequently took a job as a secretary at the Columbia University College of Physicians and Surgeons, taking additional courses in physics. Once World War II began, however, opportunities for women to assume roles traditionally held by men began to open up a bit. As a result, she was offered a teaching assistantship at the University of Illinois College of Engineering in Champagne-Urbana. With glee and excitement of pursuing her dreams, she tore up her stenographer’s pads and moved to the Midwest.

Once there, Yalow learned that she was the only woman in a group of 400 teaching fellows and professors. After receiving an A- in a lab course, the chairman of the physics department taunted her with the observation that women did not do well with laboratory work. She proved him wrong in ways she could not even have dreamed in 1945, when she received her Ph.D. 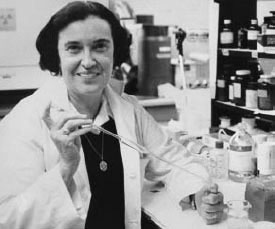 Dr. Yalow at the Bronx Veterans Administration Hospital, Oct. 13, 1977, after learning she was one of three American doctors awarded the Nobel Prize for Medicine. Photo by U.S. Information Agency

Moving back to New York, she again had trouble finding a job and taught at Hunter College as well as doing “volunteer” (read: unpaid) medical research at Columbia, where she was introduced to the nascent fields of radiation medicine and radiotherapy. In 1947, she moved to the Bronx Veterans Affairs Medical Center and in 1950 she joined its staff, full-time, where she worked for the remainder of her professional career.

It was at this point in time that she met her long-time collaborator, a brilliant young internist named Solomon A. Berson. They taught each other medicine and physics and then developed and perfected the radioimmunoassay, beginning in 1959. Because Berson died in 1972 and the Nobel Prize is never given posthumously, he did not share in the award. To commemorate his work, however, Dr. Yalow named her laboratory after Dr. Berson, so that every paper she subsequently wrote would carry his name. Dr. Yalow was also elected to the National Academy of Science in 1975 and won the prestigious Lasker Award in 1976.

Yalow was known for being single-minded in her devotion to her research and her family. She met her husband Aaron Yalow in 1943, while both were physics graduate students at the University of Illinois. He, too, was a medical physicist and worked at the Montefiore Hospital in the Bronx. They had two children and two grandchildren, lived in Riverdale, New York, less than a mile from her laboratory, and were married for nearly 50 years before Aaron died in 1992.

In 1982, Dr. Yalow gave an informal speech to a group of schoolchildren about the joys and tribulations of a career as a scientist. Enthralling the youngsters with her dedication, brilliance and modesty, Dr. Yalow told the kids, “Initially, new ideas are rejected. Later they become dogma. And if you’re really lucky, you can publish your rejections as part of your Nobel presentation.”

Dr. Yalow may have been “lucky,” but she really made her own luck by being incredibly smart, determined and talented.

Happy Birthday, Rosalyn Yalow, you are a true heroine of science.