Feb. 7 marks the 130th birthday of Sinclair Lewis, who won the Nobel Prize for Literature in 1930. 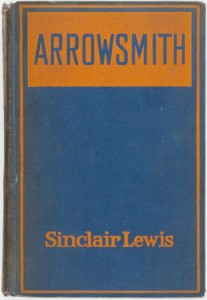 Sinclair Lewis’ “Arrowsmith” was published in 1925.

At first glance, one might ask what does an American novelist have to do with a column devoted to medical discoveries and great medical events?

Well, when considering he helped initiate our popular culture’s fascination with doctors and science, this all but forgotten, the best-selling writer’s birthday has a great deal to do with modern medical progress.

In 1925, Sinclair Lewis published “Arrowsmith,” the first novel ever devoted to the life and adventures of a medical scientist. His Pulitzer Prize winning book brilliantly tells the story of a physician’s relentless search for truth. Unlike other novels of the Roaring Twenties, let alone the decades before, the main character, Martin Arrowsmith is neither a soldier nor a misunderstood artist, although he does engage in the occasional drunken binge. Martin is not even a great medical doctor.

Instead, Lewis, who was acutely aware of the wide public interest in all the new medical discoveries then being made, introduced millions of readers to a young man who dedicates himself to the hottest scientific field of his day: bacteriology.

In the fall of 1922, the author of “Main Street and Babbitt” met a bacteriologist named Paul de Kruif. Making the introductions, depending on whose memoirs you read, were either the journalist H. L. Mencken or Dr. Morris Fishbein, the powerful editor of The Journal of the American Medical Association. De Kruif earned his Ph.D. in bacteriology from the University of Michigan, served a hitch in the U.S. Army researching influenza vaccines during World War I, and had just been fired from the Rockefeller Institute for Medical Research. His boss, Simon Flexner, complained that De Kruif was spending more time writing embarrassing magazine articles about the failings of American medicine than he was making important scientific discoveries at his laboratory bench.

Looking for gainful employment, De Kruif (who was still several years away from his string of best-selling books popularizing health topics ranging from germs to sex hormones, including his biggest hit, “The Microbe Hunters”) agreed to collaborate on a medical novel with Lewis. Soon after signing a contract with the publishing firm of Harcourt and Brace, DeKruif and Lewis booked passage on a steamship to the West Indies where they could work without distractions.

The bacteriologist was essential to Lewis’s ability to compose this wonderful novel. Nearly all the scientists, physicians and medical institutions portrayed in “Arrowsmith” were drawn from De Kruif’s experience and gallery of colleagues. The result is a remarkably accurate (if not always complimentary) historical document.

Lewis, the favorite son of Sauk Centre, Minnesota, (and the son of a doctor), had a genius for mining the rich quarry of the American Midwest, and there much of “Arrowsmith” is set. Martin’s medical school, the University of Winnemac, is a precise pen portrait of the University of Michigan. In subsequent chapters, Martin becomes a “country doctor” in a fictional hamlet called Wheatsylvania, North Dakota, and a public health officer in the even more fictional town of Nautilus, Iowa, before being invited to join the prestigious McGurk (i.e., Rockefeller) Institute in New York City.

The novel’s greatest strength is its veracity of detail about a life in medical research, from the conflicts that arise between commerce and altruism to the design of scientific experiments. Nowhere is this more clearly seen than when a bubonic plague epidemic raging on a Caribbean island affords Martin an opportunity to test his newly discovered magic bullet, bacteriophage. Martin’s wife, Leora, insists on joining him on the dangerous trip. Soon enough, Martin immerses himself in a complex human experiment where half the island’s inhabitants receive bacteriophage and the rest a placebo.

Bacteriophage was no fictional device. A viral parasite that kills bacteria, it was the talk of the bacteriology world soon after its discovery by Felix d’Herelle of the Pasteur Institute in Paris in 1917. It was, however, eventually cast aside for something even more miraculous: antibiotics.

Late one night, Leora finds a cigarette Martin left behind on his makeshift laboratory bench. Unaware that the housekeeper had accidentally spilled some plague culture on the cigarette, she smokes it in an effort to be closer to her absent husband and dies a miserable death before sunrise.

This tale actually has a true origin drawn from De Kruif’s memory bank. In February 1901, De Kruif’s mentor and bacteriology professor, Frederick Novy, returned to Ann Arbor with some specimens he collected from a plague epidemic in San Francisco’s Chinatown. Some weeks later his laboratory assistant, a medical student named Charles B. Hare, unknowingly contaminated a cigarette he was about to smoke in a manner similar to Leora. Hare developed plague and became deathly ill but, unlike the fictional Leora, survived.

In the novel, Martin is overwhelmed by the tragic news, abandons his carefully designed study, and gives bacteriophage to all who want it. While he receives international acclaim, he is enough of a real scientist to know he botched the experiment.

Throughout the novel, Lewis captures the absolute passion for discovery required of any successful scientist. This is no mere job, Lewis and DeKruif argue, it is a “religion,” with rituals and rules, along with severe penalties for those who do not follow them

In one of the novel’s most moving scenes, Martin prays to himself while working late at night in his laboratory, amid burning Bunsen burners and bubbling racks of test tubes: ”God give me a quiet and relentless anger against all pretense and all pretentious work and all work left slack and unfinished. God give me a restlessness whereby I may neither sleep nor accept praise till my observed results equal my calculated results or in pious glee I discover and assault my error. God give me strength not to trust to God!”

From medical practice to public health and scientific discovery, from the unbridled ambitions of medical students and doctors to the complexities of delivering medical care in a diverse nation like the United States, “Arrowsmith” delivers with humor and brio a slate of important lessons for everyone concerned about 21st century health care.

So here’s a rousing Happy Birthday to Sinclair Lewis, with a nod to his own brand of medical discovery. No longer as popular as he was in the 1920s, Lewis continued to write novels and get into silly fights with his critics and friends until he died in 1951, a little less than one month shy of 66, largely due to his alcoholism and depression.

For more than 20 years as a medical school professor and even on the pages of medical journals and the New York Times, I have been pleading others to pick up the novel and get to work reading it.

And on no day more than Sinclair Lewis’s birthday does the doctor in me wish I could prescribe “Arrowsmith” to my more profit-driven colleagues, my overeager medical students, the policymakers, those working at health care, health device, biotechnology and pharmaceutical corporations, and our worried patients.

Perhaps “Dr. Lewis” might help restore some health to the ailing, and yet miraculous, enterprise we call American medicine.