He was a champion of public health — but played a role in the horrors of Tuskegee. Should a college expunge his name?

He was surgeon general under President Franklin Roosevelt. He’s been lauded for turning sexually transmitted diseases from a moral failing into a medical concern. During the height of segregation, he acknowledged the need to stem health disparities between black and white America.

But Dr. Thomas Parran Jr., whose name graces the main building of the University of Pittsburgh Graduate School of Public Health, has also been called an architect of the syphilis experiments on black men and women in Tuskegee, Ala. While he was surgeon general, he was also aware that U.S. public health researchers were intentionally infecting with syphilis Guatemalan people who were mentally ill or in prison, in the name of research.

Now, under pressure from students who say Parran’s role in these experiments shows his disregard for human lives, the university is grappling with whether to strip his name from the building, and by default, the school he helped found after decades of public service.

“This isn’t who we are anymore,” said Helen Ann Lawless, a second-year graduate student in the public health school who is part of the push to get the building’s name changed. “We are still attached to this legacy … we can’t have his name on our building because it venerates him.”

Parran’s family disagrees. His grandson, John C. Parran, and his great nephew, Richard Kirkpatrick, told STAT in an email that their grandfather and great uncle saved millions of lives during his career through the work he did to improve public health. They suggest keeping his name on the building, but fostering conversations about the experiments in Tuskegee and Guatemala through ethics courses.

“No one is perfect,” Parran and Kirkpatrick said. “The name [on the building] does not ‘celebrate’ my grandfather and grand uncle. Rather, it honors the passion he had for furthering public health awareness and education as means for improving the health and well-being of all people.”

Erasing a name from a building isn’t straightforward. And it isn’t the first time Pitt has faced pressure to rename it.

But in an era when schools and local governments are being newly pressed to reconsider the old legacies, this time might be different. 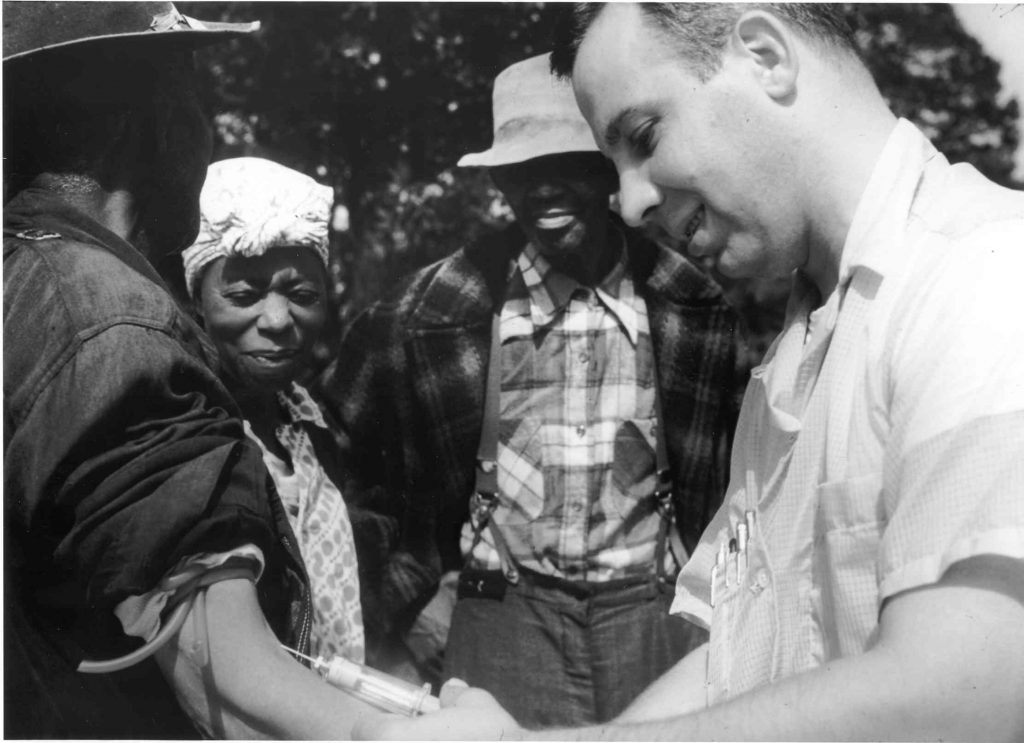 In Tuskegee, experiments without proper consent

In 1932, in the early days of the Depression, federal health researchers started the “Tuskegee Study of Untreated Syphilis in the Negro Male.”

The U.S. Public Health Service, the forerunner agency to the Department of Health and Human Services, enrolled 600 black men — 399 with syphilis and 201 without. The men were offered food, medical exams, and burial insurance. They were not offered treatment throughout the 40 years that the experiment went on, even when, 15 years later, penicillin had become the standard of care. Some infected their wives.

Lillie Tyson Head remembers the day her father found out he had been part of the study. He had congenital syphilis.

“My father didn’t know about this study until everybody knew,” said Head, referring to an Associated Press story from the early 1970s widely credited with exposing the unethical treatment of the study participants. “He was a bit ashamed of what had happened.”

READ NEXT: The Golden State Killer case was cracked with a genealogy website. What does that mean for genetic privacy?

When Parran’s role in devising the syphilis experiments first came to Head’s attention last summer, she was torn. Back then, changing the name of the building didn’t seem right, she told STAT. She preferred the idea of creating memorial plaques for the men in the study and ensuring students were aware of the Tuskegee chapter of Parran’s career.

But now, she said, the university needs to change the name, and then do more, not just in the public health school, but also across the campus.

“After the name’s changed, then what? What will be done? What will the university do to talk about social and racial disparity?” said Head, who now leads the Voices for Our Fathers Legacy Foundation, which represents families who were part of the experiments at Tuskegee.

But the conversation about renaming the public health school has bled outside Parran Hall.

Daniel Jacobson, a graduate student in social work and the president of the Latin American Graduate Organization of Students at Pitt, said Parran’s role in dehumanizing Latinos through the Guatemala syphilis experiments should not be lost in the debate.

Jacobson said participants in those experiments were devalued and even preyed upon. The United States apologized to Guatemala for the episode in 2010, but it wasn’t until the following year that Parran’s role in the tests received wide attention.

“This is a marginalized group,” Jacobson said, referring to the people used in the Guatemala experiments. “No one is going to care about these people.”

Like other Pitt students who spoke to STAT, Jenea Lyles learned about the syphilis experiments at Tuskegee when she was younger, but did not know about Parran’s involvement. She’s part of a black activism group on campus, and among the students pushing the university to drop his name from the public health school building. She’s pre-med, she said, in the hopes of rebuilding some of the lost trust in her community.

“They recently renamed K. Leroy Irvis Hall,” Lyles said, referring to another building on campus once called Pennsylvania Hall, now renamed after a former black speaker of the Pennsylvania House of Representatives. “So Parran should be, too.” 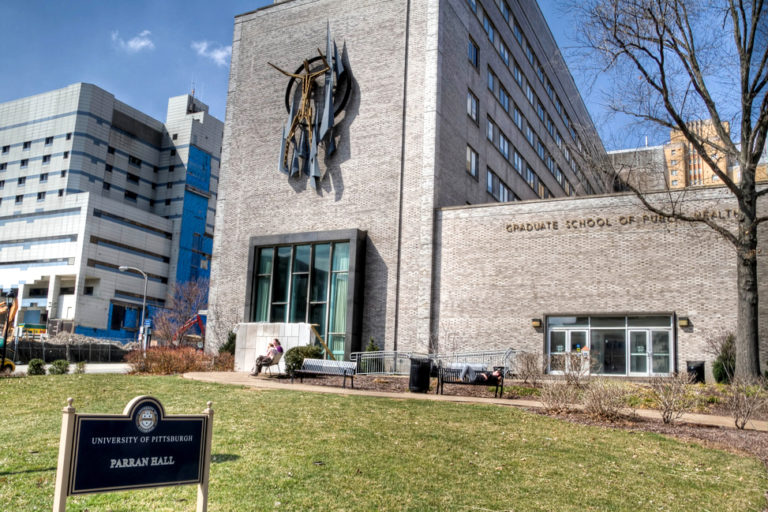 Parran Hall on the University of Pittsburgh campus. Photo By Ronald Woan via Creative Commons

Then, in January, Dr. Donald Burke, the dean of the public health school, penned a letter to the university’s Office of Inclusion and Diversity. After several months of discussion, including with students, he asked that the office form a committee to address “whether the name ‘Parran Hall’ is consistent with the university’s mission to create a diverse and inclusive environment.”

READ NEXT: Making health research relevant — and less feared — in the Mississippi Delta

Burke said in his letter that Parran’s legacy had been of concern since the former surgeon general’s role in the Guatemala tests came to light in 2011. At that time, the discussion centered around a doctor named John C. Cutler, also a former dean at Pitt, and the person widely credited with carrying out the experiments in Guatemala. (A lecture series in Cutler’s name was changed.)

In early April, the university held a panel discussion on Parran and his legacy. Speakers included a team of academics, but Parran’s grandson, who lives in the Pittsburgh area, said he was not invited to participate, and Head said neither was anyone from the Voices for Our Fathers Legacy Foundation.

The recommendations of the committee empaneled to consider the issue will be released when they are ready, said school officials. Any change to the name would have to be voted on by the university’s board of trustees.

The university does not receive any contributions from Parran’s family or estate in connection with the name of Parran Hall.

Parran and Kirkpatrick said they appreciate the way in which the university is handling the process but are troubled that Thomas Parran is being judged based on today’s norms instead of being seen through a historical lens.

Doing so means “both good and bad” will be expunged from history, they said.

Lawless, the public health graduate student, said she thinks the university’s choice is clear. While she was happy to get into Pitt — she wanted to pursue a joint master’s degree in social work — she’s frustrated that the darker side of Parran’s past was long overlooked. During her orientation, she recalled, no one mentioned his connection to Tuskegee or Guatemala. She and some of her other classmates only found out later.

“That was kind of earth-shattering to us,” she said.

This article is reproduced with permission from STAT. It was first published on April 27, 2018. Find the original story here.

Left: Dr. Thomas Parran, a former surgeon general, speaks to a Senate committee in 1939. Photo via Wikimedia Commons, originally from Library of Congress.