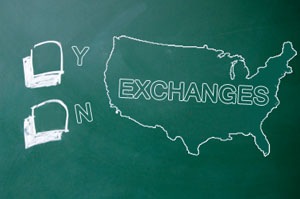 Still wrestling with the decision as of midday Thursday were Idaho, Arizona, Nebraska, Tennessee, Pennsylvania, New Jersey, Oklahoma and Wisconsin.

The markets, called exchanges, are a key component of the health care law which aims to expand health coverage to 30 million people. They are websites where individuals and small businesses can shop for coverage which will take effect Jan. 1, 2014, and also find out whether they are eligible for federal subsidies or for Medicaid, the state-federal insurance program for the poor.

Tennessee Gov. Bill Haslam, a Republican, who was still weighing the decision Wednesday night, said he sees the benefit of having more control over state insurance markets, but is not sure he can get enough votes in a GOP-controlled legislature to move forward on the state model.

“Politically, it will be difficult,” Haslam said Monday.

Spokesman David Smith said the governor believes states typically run programs better than the federal government, but “there are lot of unknowns and unanswered questions out of Washington.”

Operating an exchange includes duties such as running call centers to handle customer questions, deciding the minimum benefits all plans must offer and determining whether health plans have enough doctors and hospitals.

Don Gaetz, Florida’s incoming state Senate president and a Republican opposed to the health law, said that while it’s too late for his state to run its own exchange in 2014, officials will weigh whether to partner with the federal government.

“It would give the state a modicum of influence over how the entity operates,” Gaetz said. “There could be some advantages in holding down costs for participating health plans.”

Health insurers and most health providers favor state-run exchanges because they are likely to exert greater influence on rules affecting insurance costs and benefits.

The Obama administration has offered few details about how a federally run exchange would operate and some critics have questioned whether it is up to the task of running the programs in more than half the states.

Some conservative groups also question whether subsidies to help people buy coverage can be paid in the federally run exchanges — an argument discounted by Democrats and most legal experts.

That decision was criticized Wednesday by the Republican Governors Association, which asked President Barack Obama to extend the deadline until after the administration publishes more rules about how the exchanges would work.

“States are struggling with many unanswered questions and are not able to make comprehensive far-reaching decisions prudently,” said the letter signed by Govs. Bob McDonnell of Virginia and Bobby Jindal of Louisiana.

Alan Weil, director of the National Academy of State Health Policy, said he doesn’t think consumers should see a big difference in how the exchanges work regardless of whether they’re run by the state, the federal government or a combination of the two. The law prohibits plans from turning people away or charging them more because of their health status.

Nonetheless, health plans will face some different rules around the country and offer different coverage — much as they do now.

While the Obama administration hoped most states would run their own exchanges, officials say having three different models is not necessarily a bad thing.

“We have very high hopes for the effect the new marketplaces will have on buying coverage,” Michael Hash, director of the Office of Health Reform for the Department of Health and Human Services, said at a conference Wednesday. He added that the exchanges will give consumers one-stop shopping to compare plans.

“We will be ready for open enrollment in October,” Hash said.

States have been weighing whether to build their own exchanges since the health law was signed in March 2010. Among those states that don’t plan to move ahead, some say they did not do sufficient planning while waiting for the Supreme Court to decide the law’s constitutionality and the outcome of the presidential election. Others do not want to have anything to do with a law they have fought to repeal. Still others worry about the costs of running the exchange. The marketplaces will get federal dollars to ramp up, but then must be self-sufficient.

Building exchanges has been a daunting task even for states such as Maryland that started the process two years ago.

“It’s been an enormous lift,” said Tequila Terry, director of plan and partner management at the Maryland Health Benefit Exchange.

Maryland officials have not decided how they will fund the exchange’s operation, though she said the most probable options were a combination of state funds and charging insurers a surcharge on premiums, which would likely be passed onto consumers.

This story was produced by Phil Galewitz and Alvin Tran of Kaiser Health News. KHN is an editorially independent program of the Henry J. Kaiser Family Foundation, a nonprofit, nonpartisan health policy research and communication organization not affiliated with Kaiser Permanente.

Crackdown on immigrants who use public benefits takes effect

By Pamela Foohey, The Conversation

Biden in South Carolina: I’m going to ‘stay in this for the long haul’