Nine million children nationwide receive health care coverage through the Children’s Health Insurance Program. But many of them could soon be uninsured if Congress doesn’t vote to reauthorize its funding.

Why is this popular children’s health program, created through bipartisan legislation two decades ago, at risk? Here’s a brief history of the Children’s Health Insurance Program and what it means for children and states across the country. 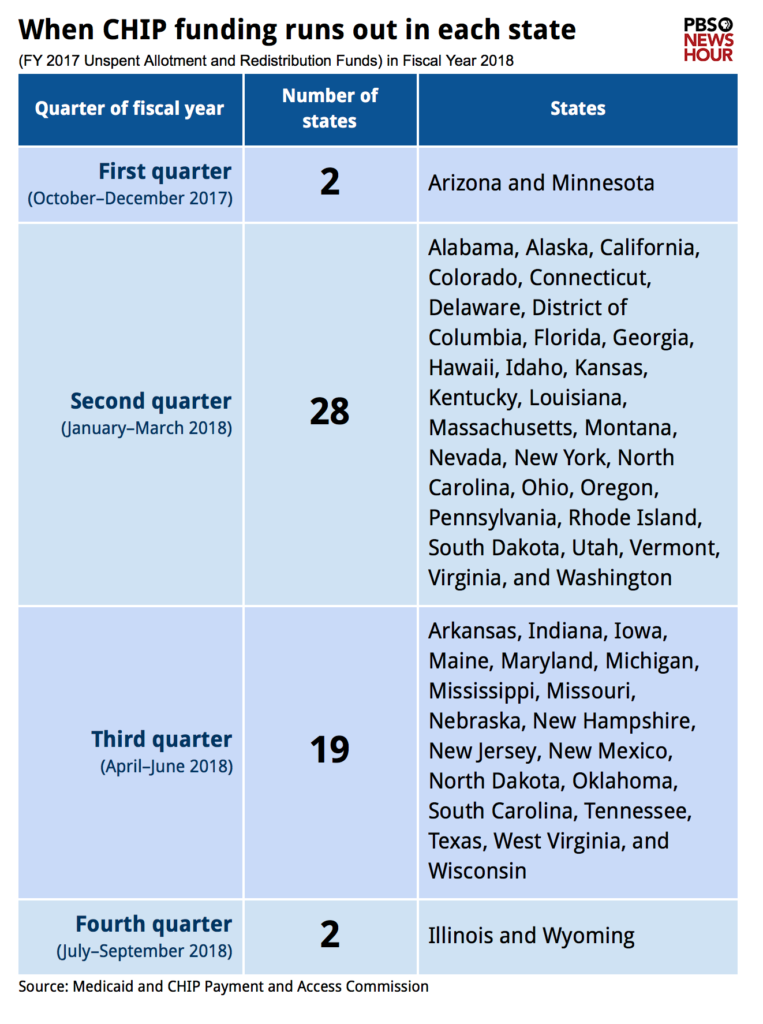 In 1997, Senators Orrin Hatch, a Utah Republican, and Ted Kennedy, a Democrat from Massachusetts, pushed a bipartisan campaign to create legislation that would secure access to health care for 10 million uninsured children nationwide as part of the Balanced Budget Act. Many of these children grew up in working households that made too much money to qualify for Medicaid.

“No child should have to go without healthcare – that’s why Senator Kennedy and I worked to create CHIP 10 years ago,” Hatch said in a June 2007 statement when Congress was set again to vote for the program’s funding. “The health care children receive when they are young will largely determine their quality of life for their entire adulthood.”

How does the program work?

The program was designed to cover children whose working families made too much money to qualify for Medicaid, but too little to afford insurance on their own (defined in the legislation as up to 200 percent of the federal poverty level). CHIP offers children basic health services, like seeing the dentist for the first time, and also gives access to more specialized health care, like asthma inhalers or Epipens.

CHIP is a block grant program, which means the federal government gives states money to spend as they see fit. At the state level, the funding formulas get very nuanced very fast, but the general gist is that the federal government matches the money states put in. In years past, when Congress has greenlit funding, states had up to two years to spend those dollars. Any funding states left on the table was then redistributed to states that came up short.. CHIP is present, in some form, in all 50 states.

Has it been successful?

Five years after CHIP passed, children from all 50 states, territories and the District of Columbia were enrolled in the program, according to the nonpartisan Medicaid and CHIP Payment and Access Commission (MACPAC). By 2016, 9.2 million children were enrolled, the National Center for Health Statistics reported, and a much lower 3.8 million children lived without health insurance. And according to the Urban Institute, nearly half of the nation’s children ages 3 or younger — 7.7 million — receive health care through this program or Medicaid.

Joan Alker, who directs Georgetown University Health Policy Institute’s Center for Children and Families, attributed the lowering number of uninsured children to outreach and resources made available at the state level by federal support through CHIP and Medicaid. But she said those improvements are now at risk.

“As soon as notices go out, we’re going to see kids go without coverage.”

Why is Congress facing a deadline now?

When it was first established, CHIP was authorized for a decade, but Congress has had to vote on funding more often since then. In 2009, then-President Barack Obama signed the Children’s Health Insurance Program Reauthorization Act to guarantee funding until 2013. The Affordable Care Act authorized CHIP for an additional two years, and in 2015, Congress extended it again, through Sept. 30, 2017.

Congress missed its Sept. 30 deadline to reauthorize funding for the popular program, as lawmakers focused on host of thorny policy issues, from the tax overhaul to funding the government and providing disaster relief after several hurricanes and wildfires. Since then, a short-term funding measure called a continuing resolution has kept the federal government and CHIP running, but that is scheduled to expire again Friday.

“This continues to be a top priority for Chairman Hatch,” according to a statement issued by the Senate Finance Committee, of which Hatch is a chair. The committee has proposed “a bipartisan bill that would extend funding for five years and provide certainty for families and states.” Hatch “is continuing to make progress in his discussions on how best to address this issue on the Senate floor and remains confident this will be resolved before the year’s end,” the statement added.

Normally, states need at least six months of planning to effectively run the program, and position people and resources where they’re needed, according to MACPAC. Congress has always cut it close on CHIP’s reauthorization deadlines, it added. 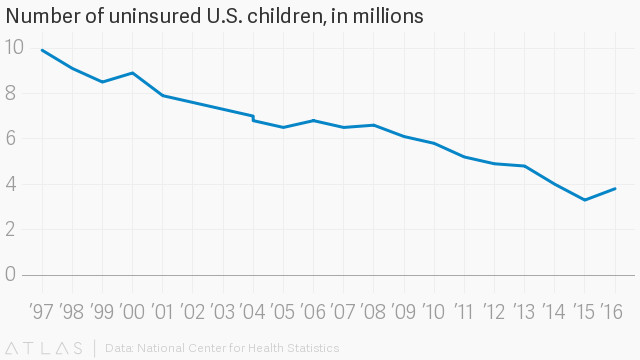 Which states could lose CHIP first?

All states will feel the impact of a discontinued CHIP. It’s just a matter of when and by how much. Minnesota and Arizona are projected to run out of funds as early as Dec. 31, according to estimates from the Medicaid and CHIP Payment and Access Commission. Another 28 states would run out of money by March 31, and states would continue to do so in waves for months to come. According to a new report from Georgetown University Health Policy Institute’s Center for Children and Families, an estimated 1.9 million children could lose their insurance in January alone. (For a full list of when funding expires, see our chart above).

Some states are starting to warn those enrolled in CHIP that the program is at risk. Colorado and Virginia mailed letters to families, warning they may have to find new ways to pay for their children’s health care needs. Alabama announced no new children would be enrolled as of Jan. 1, 2018, and coverage would be terminated by Feb. 1 if Congress doesn’t act soon. Connecticut said the state would stop the Husky Health B program by Jan. 31 “because Congress failed to take action to extend the program.”

States are preparing for worst-case scenarios in the absence of a vote on Capitol Hill. If funding falls through, children and their families have a few options. Depending on household income, children may qualify for coverage under Medicaid. Children whose families make too much money to qualify for Medicaid may receive a special enrollment exception to sign up for insurance on the health care exchanges established under the Affordable Care Act. Open enrollment ended Dec. 15.

Congress could vote on another continuing resolution funds CHIP until January, but there’s a cost to that, Alker said. States already have sounded the alarm for families whose children rely on this program for health care coverage. Many of those families are scrambling to develop solutions of their own. And states are losing faith in Congress’ ability to restabilize the program, some of them weighing whether to end the program even before lawmakers decide what to do.