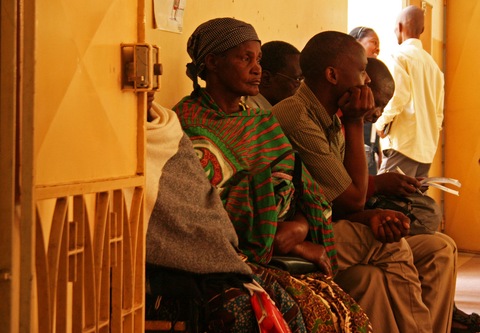 Patients wait at an HIV clinic in Mozambique.

HIV-negative men and women who took a daily pill usually used to treat the disease reduced their risk of becoming infected with HIV by more than 60 percent, two new studies show.

The research suggests use of antiretroviral medication before exposure to HIV could play a significant role in slowing the spread of the epidemic. It also means people at high risk for contracting HIV could have a new way to proactively help protect themselves on a daily basis.

The larger of the studies released Wednesday was led by the University of Washington and funded by the Bill and Melinda Gates Foundation.* It involved nearly 4,800 heterosexual couples in Kenya and Uganda with one partner who was HIV positive and one who was negative.

The second study run by the Centers for Disease Control and carried out in Botswana found the combination drug reduced infection risk by 63 percent compared to a placebo, among a group of 1,200 uninfected heterosexual male and female participants.

Chan said the WHO will work with countries to use the findings, an indication that the WHO is looking at ways to implement the mode of prevention, known as pre-exposure prophylaxis.

Currently condoms and male circumcision are the most widely used methods to help prevent HIV transmission through sexual contact. Breakthrough research released earlier this year found that getting HIV positive patients on antiretroviral medication early in the course of the disease could also dramatically reduce the risk to their sexual partners. HIV patients put on medication immediately were 96 percent less likely to pass the disease on compared to patients who only received treatment later in the progression of the disease.

The new studies released Wednesday build on these results and on the promising outcome of a vaginal microbicide trial last year.

“I think that all of these studies together really highlight the significance of the potential of treatment for prevention,” said Nancy Padian, the director of international AIDS research at the University of California, San Francisco, and an adviser to the U.S. President’ Emergency Plan for AIDS Relief. “These results are fantastic, prevention has completely turned around. It was just over a year ago when we had so many trials with no results or even negative results.”

But she warned against abandoning other forms of prevention and that financing is sure to be an issue.

The cost of expanding access to antiretrovirals is always an issue at an international level, and offering it daily to both positive and negative individuals would be a huge logistical undertaking. Earlier this week, Gilead, the makers of the two drugs involved in the prevention studies, announced it will allow generic versions of four of its HIV drugs in developing countries. In addition to cost concerns, Padian said there is a lot to be worked out in implementing a prevention strategy outside of a clinic trial.

“It requires a high level of adherence,” she said. “We don’t know long term what this would be like both for protection and adherence, when people use this in the real world.”

*Editor’s Note: For the record, the Gates Foundation is an underwriter of NewsHour Global Health coverage.