The federal government released on Thursday a new five-star rating system for home health agencies, hoping to bring clarity to a fast-growing but fragmented corner of the medical industry where it’s often difficult to distinguish good from bad.

Medicare applied the new quality measure to more than 9,000 agencies based on how quickly visits began and how often patients improved while under their care. Nearly half received average scores, with the government sparingly doling out top and bottom ratings.

The star ratings come as home health agencies play an increasingly important role in caring for the elderly. Last year 3.4 million Medicare beneficiaries received home health services, with nurses, aides, and physical and occupational therapists treating them in the home. Medicare spends about $18 billion on the home health benefit, which provides skilled services that must be authorized by a doctor, not housekeeping care that some elderly pay for privately.

For both the government and patients, Medicare’s home health visits are one of the least expensive ways to provide care, and the system has been especially susceptible to fraud. Assessing quality is often challenging for patients and their doctors, who must authorize the visits, often just as patients are leaving the hospital. The elderly tend to be less familiar with the reputation of home health agencies than they are with hospitals and other institutions. That makes evaluating quality difficult for family members and guardians.

“It’s not like a nursing home, where you can go and walk around,” said Dr. Cheryl Phillips, an executive at LeadingAge, an association of nonprofit groups focused on the elderly. “You can call the agencies and find out a little bit about them and their philosophy of care, but even for an informed consumer like me, you’re kind of stuck with whatever your physician has ordered.”

Experts said the ratings could have substantial financial impacts on agencies, even driving some low-rated ones out of business. Hospitals, doctors and nursing homes may be reluctant to refer patients to agencies with fewer than three stars. A total of 2,628 agencies — 28 percent of those Medicare evaluated — received those below average ratings.

“It’s a very fragmented, competitive market in a lot of metropolitan areas,” said Lilly Hummel, a manager at Avalere, a health care consulting firm in Washington, D.C. “It could get difficult for home health agencies that, for whatever reason, aren’t doing well on the star ratings.”

The ratings are based on agencies’ assessments of their own patients, which the agencies report to the government, as well as Medicare billing records. The data is adjusted to take into account how frail the patients are and other potential influences. Medicare intends to use the same or similar data sources when it eventually begins to pay bonuses and penalties to agencies based on performance, as it does for hospitals. 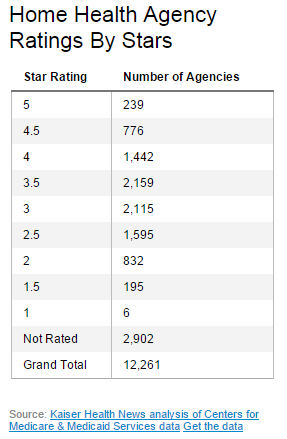 More than 12,000 home health agencies take Medicare, including local for-profit shops with just a few employees, nonprofit associations of nurses, hospital affiliates and subsidiaries of publicly traded corporations like Kindred Healthcare and Amedisys. Medicare assigned stars to all but 2,902 agencies that did not have enough patients to evaluate, had only started business recently or did not provide enough data.

Among those Medicare did rate, 46 percent received 3 or 3 ½ stars. Medicare gave the top rating of five stars to 239 agencies while 195 agencies received 1 ½ stars. Only six agencies received a single star. “What this indicates to us is a large proportion of home health agencies are performing reasonably well,” said Dr. Kate Goodrich, who directs the quality measurement program at the Centers for Medicare & Medicaid Services.

There was a wide variation in scoring among types of providers, a Kaiser Health News analysis found. Visiting nurse associations and agencies with religious affiliations tended to get the most stars. Home health agencies run out of skilled nursing homes and agencies run or paid for by local governments tended to perform poorly.

A third or more of home health agencies that Medicare rated received four or more stars in Alabama, California, Florida, Maryland, New Jersey, Pennsylvania, Rhode Island, South Dakota and Utah, the KHN analysis found. The highest proportion of one or two star agencies were in Alaska, Arkansas, Minnesota, Ohio, Oregon, Texas, Wyoming, and the District of Columbia. In those places, four out of 10 agencies or more received less than three stars.

The star ratings were designed to capture overall quality by summing up the results of nine of 27 measures Medicare already publishes on its Home Health Compare website. Agencies were evaluated by how quickly they started visiting a patient, whether they explained all the drugs a patient was taking either to the patient or their caretaker and whether they made sure a patient got a flu shot for the season.

The agencies also were judged on how much their patients improve in skills like walking, getting in and out of bed, bathing, breathing and being able to move around with less pain. Finally, the agencies were rated on how many of their patients ended up going to the hospital. The current star ratings are based on performance from the fall of 2013 through the end of last year. Medicare will reassess the stars quarterly.

Some in the home health industry are welcoming the ratings, but there is concern that consumers will interpret the scores differently than Medicare intends. The government considers three stars to be solid performers, but in rankings for restaurants, hotels and other common services, three stars are often interpreted as mediocre.

“It kind of equates us to a hotel and it’s not the same,” said Carrie Koenig, an executive at MedStar Visiting Nurse Association, which serves people in Maryland, Virginia and Washington and received 3 ½ stars. “I don’t know how confusing that will be for consumers.”

Another concern is that many of the quality results are self-reported by home health agencies. “Down the line, we are absolutely going to have to find another data source,” said Molly Smith, an executive at the Visiting Nurse Association of America. “It really undermines the home health industry to always be reporting with data that has, yes, the potential to be manipulated.”

Medicare publishes the results of patient surveys but did not include those in the star ratings. Agencies will be assigned their own stars for patient satisfaction starting in January 2016. Those ratings are more likely to reflect some of the more common complaints about home health care over things like the scheduling of visits.

There’s little evidence consumers use the data that are already published, which are not always easy to interpret. The government hopes the stars will make that easier. Alex Alvarez, an official at Montefiore Care Management Organization in New York, said it is difficult to talk about these choices when patients are about to leave the hospital. Hospitals are required to give patients several choices of home health agencies, even when a hospital runs its own.

“You give them as much information as you can, but they’re not really in a receptive mode. They remember, ‘Oh, somebody spoke to me,’ but they don’t remember what they said,” Alvarez said. “They just want to go home.”