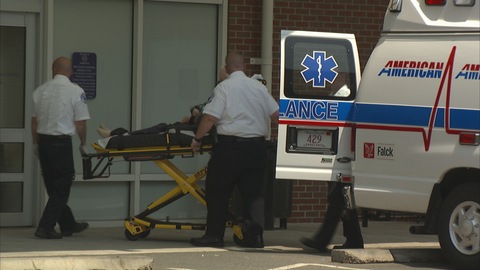 Should hospitals be held accountable for what happens to patients once they’re discharged? A new policy under the Affordable Care Act says yes. Photos by Jim Petit.

The federal government began fining hospitals based on how many Medicare patients were readmitted within 30 days of discharge in October. They track three specific conditions — heart failure, congestive heart failure and pneumonia.

The goal is to improve the quality of care for seniors by preventing return trips to the hospital — and save the government millions (a whopping $17.5 million dollars this year alone) in the form of fines to the hospital, based on their readmission rate. 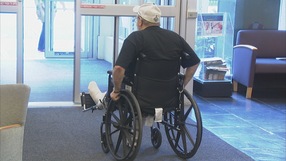 In 2010, nearly one in five Medicare patients returned to the hospital within a month of discharge. Many hospitals are now working on more aggressive ways to follow-up with seniors in the first 30 days, to avoid a readmission.

Since October, the policy has been widely studied, reported and analyzed. And its penalties have been revised.

On Friday’s PBS NewsHour, health correspondent Betty Ann Bowser examines how the policy is unfolding at a medical center in Boston. Tune in for the full report.

For a broader overview, we spoke to Kaiser Health News reporter Jordan Rau recently. He’s been following the policy since the Affordable Care Act was passed in 2009.

NEWSHOUR: Jordan, thank you so much for joining us. First of all, what do readmission rates tell us about a hospital? And is it something that consumers can use as a tool?

JORDAN RAU, Reporter, Kaiser Health News: On the face of it, they tell you how a hospital and the post-acute care that a patient gets after leaving worked, how well they performed in making sure patients follow everything that they need to do to recuperate from whatever brought them into the hospital. So it gives you an overview of that “continuity of care” between the time that you leave the door and the 30 days afterwards. And it’s generally a reflection of how well patients adhere to whatever medication they were supposed to take, follow-up with appointments with doctors, and follow the diet they’ve been instructed on in the case of something like heart disease or diabetes.

NEWSHOUR: Are these numbers something that consumers can use as a tool, or is it more complicated than that? Should they be wary of using that strictly as a tool in that sense?

RAU: You can certainly use it as a tool. It’s one of many factors you should take into consideration. There are over 100 published measures out on Medicare’s Hospital Compare website, including hospital readmission rates, and there’s mortality rates, patient surveys, infection rates. There’s a lot of information. I don’t think consumers should use it as a primary tool for choosing a hospital, but if you’ve got a hospital that’s a particular outlier, I think that’s certainly something to take into consideration.

NEWSHOUR: Why are patients readmitted?

Second, many are due to the natural fact that a lot of sick people, particularly older people, don’t always get better immediately — particularly for some with complex problems like congestive heart disease, pneumonia, and heart failure, the three conditions that Medicare tracks in this new policy.

After a patient is discharged, a lot of things can happen. One of the most common that experts are discovering is that doctors will often give patients new prescriptions to deal with their illnesses. And when people go home, they don’t understand some of these are duplicative of what they’re already taking, maybe under a different name — you know, like a drug could be a generic, while they’ve been taking a brand name, and they end up taking too much of a medication, or the wrong dose, or they didn’t realize they were supposed to stop taking something they had been taking. So that can bring them back into the hospital.

For individual medical conditions, there are other factors. For example, in heart failure, it’s very important to maintain a pretty scrupulous diet, and if people don’t follow that, they can end up back in the hospital. And then there are follow-up factors, like if you’re not going to your regular doctor to check up on you, it’s more likely a problem won’t be caught until you end up in the hospital again.

NEWSHOUR: How many readmissions can be prevented, realistically?

RAU: That is a great question, and I don’t think there’s a firm answer. The most recent estimate, which comes from a commission that advises Congress, is that about one out of eight Medicare patients returned to the hospital in 2011 in a readmission that in theory might have been preventable. But even the best-performing hospitals had potentially preventable readmission rates of nearly 10 percent, and nobody believes that every such readmission can be averted. If you look at the difference between the hospitals with the highest and lowest readmission rates, you can conclude that around 20 percent of readmissions should be avoidable.

RAU: Well, they’re one and the same — because readmissions cost the government a lot of money. And under very few circumstances are readmissions considered an ideal outcome. But I would say the primary desire of the policy was both to improve care and force hospitals to focus on doing a better job helping patients transition out of the hospital.

Policy makers decided that hospitals are the biggest players on the block. They’ve got the most money and they have the most experience just in terms of all the patients coming through. This penalty was a way of forcing them to take this sort of broader overseer role, and make sure that even though they didn’t benefit from it financially, they would start paying attention to patients once they left the door.

NEWSHOUR: Readmissions are down slightly, about half a percent in 2012. How much of that can be attributed to this new policy?

RAU: The Centers for Medicare and Medicaid Services (CMS) argues that in anticipation of this policy going into effect, hospitals were really getting their acts together on this. But it’s impossible to tell. And there’s a wide variation in there, in that some hospitals have lowered their readmission rates, but others have not. No one has done a comprehensive study to see what type of actions hospitals took led to lower readmission rates. So we just don’t know.

NEWSHOUR: For hospitals, how big a deal is this one-percent penalty — soon to be three-percent in 2015?

RAU: It depends on the hospital. For hospitals that have very tight margins — operating with one- or two-percent profit, or at a loss — these penalties can be very significant. That said, most of the hospitals are not getting the full 1 percent penalty. They’re getting anywhere between 0.01 percent and 1 percent. Only 276 of 3500 hospitals are getting the full penalty. So for most, it’s sort of a warning nudge. It’s also a way to get the hospital administration and board or owners to realize this is an important quality issue.

That being said, once the penalties get up to 3 percent, it gets a lot more serious. But just to be clear, these penalties are just affecting payments for Medicare patients — that’s between a quarter to 40 percent of your patients. So the penalties don’t affect payments for people who have insurance through their employer or from Medicaid.

PBS NewsHour: The hospital we profiled, Beth Israel Deaconess Medical Center in Boston, got $4.9 million to start this Post-Acute Care Transitions program, or PACT, from CMS. They’ve seen a significant drop in their readmission rates for Medicare patients enrolled in the program. But for hospitals that haven’t gotten a grant, how hard is it to start a program like PACT?

RAU: It depends on how strong they are financially. There are hospitals that have done these types of programs, and even more aggressive programs like Banner Health system out in Arizona, without any outside money. But they have strong finances, so they can dig into their pockets and cover it.
But for struggling hospitals that are already operating in the red, it’s going to be a big problem. That said, even these CMS grants like the one that Beth Israel got are limited in time. They’re not going to be going on forever. So after the grant ends, this sort of uncompensated work that they’re doing right now won’t be paid for by the government.

NEWSHOUR: Some of the experts we talked to, like Dr. Ashish Jha of the Harvard School of Public Health, have urged changes to the policy because it penalizes safety net hospitals. What are the arguments for — and against — revising the policy?

RAU: The overall consensus among policy makers is moving pretty quickly and fairly strongly toward the idea that the penalties should be revised to take into account the portion of patients who are low-income. MedPAC, the commission that advises Congress, has just recommended that — and they were one of the originators of the readmission penalty. There has been some very strong academic work out of Harvard by Karen Joynt and Ashish Jha showing that this is a problem. So I think that in that case, it’s pretty well-established.

Now the argument against it is two-fold. One is that some hospitals that treat a lot of poor patients do extremely well in preventing readmissions — and therefore, all hospitals can do that. It’s not a guarantee that if you have a lot of poor patients, you will have high admission rates. And conversely, there are some hospitals that have patients who are well-off financially that have high readmission rates.

And then the second argument is a more touchy one, and it has to do with the fact that the government has been understandably concerned about discounting readmissions, becoming acceptant and almost complacent about readmissions in places that treat a lot of low-income people, because they don’t want to signal that those people are just going to inevitably be readmitted. And they also don’t want to change the readmissions statistics to make it appear as if their readmission rates are lower than they actually are. So MedPAC came up with, I think, a pretty smart answer. It said, when reporting readmission rates, socio-economic status should not come into account. But when determining the penalties, it should.

NEWSHOUR: How likely do you think it is that CMS will actually revise the policy?

RAU: That’s another good question, and it’s completely unclear. One of the issues is that CMS had said in the past that it doesn’t have the authority to change the penalty without Congressional action, because specifics about how the readmissions penalty works were written in some detail into the Affordable Care Act, as opposed to a lot of the other pieces, where they said “this is our intent, and we instruct the government and the Department of Health and Human Services to figure out how to do it.”

So, if CMS is going to change the program, it must change its view that it doesn’t have the authority to do it. Now another way, obviously, is to fix the legislation in Congress, and normally from a policy perspective, that would be very easy, because as more and more parts of the health care system are implemented, the stakeholders come into agreement on this topic. However, the fact is that no one on Capitol Hill has wanted to open up anything related to the Affordable Care Act because it’s so politically controversial. It’s become a Pandora’s box. So because of that, the readmission penalty is one of at least 10, maybe dozens of things that are considered fairly innocuous, non-controversial fixes that don’t appear anywhere on the spectrum of things that Congress is considering.

NEWSHOUR: Thanks so much, Jordan.