How a government shutdown could affect your health

WASHINGTON — Unless Republicans coalesce this week around a short-term spending deal, the federal government will shut down — a scenario that will likely have widespread and long-lasting consequences for public health.

The Food and Drug Administration would likely have to forego updating mislabeled medications or conducting routine food safety inspections. The Centers for Disease Control and Prevention would furlough key staff amid one of the most severe flu seasons in recent memory. And the National Institutes of Health might have to stop enrolling hundreds of patients in clinical trials. All of the federal government’s health agencies, moreover, would be hamstrung in their efforts to help address and coordinate a response to the ongoing opioid epidemic.

That’s according to federal staffers who’ve lived through this before, and documents outlining each agency’s contingency plan for previous fiscal years.

The 2013 government shutdown “was a very challenging time,” said Dr. Margaret Hamburg, who at the time was the FDA commissioner. “[It was] extremely disruptive to the critical, unique, and essential work of the FDA. … Important programs dramatically slowed or halted without the needed staff. Even for those essential time-urgent activities, available staff — professional and support — were stretched dangerously thin.”

In 2013, the CDC shuttered most of its annual seasonal influenza program during the shutdown. It largely stopped tracking disease outbreaks across the country…

The shutdown “was this time in which that I felt I really couldn’t do my job, as CDC director, of keeping Americans safe, because more than 8,500 of my staffers had been told to go home, and they do important things that protect Americans,” said Dr. Tom Frieden, who was in charge of the CDC during the 2013 government shutdown. He is now CEO of Resolve to Save Lives, a philanthropic global health campaign overseen by the nonprofit Vital Strategies. “It’s unsafe, it’s terrible for government, it endangers Americans, and it doesn’t save any money. So it’s a really bad thing to have happen.”

Broadly, the Health and Human Services Department would likely furlough about 41,000 of its 82,000 workers, according to a fiscal year 2017 contingency plan. The plan hits different agencies differently — about 55 percent of FDA staff, for example, would keep working, while only about 10 percent of the Substance Abuse and Mental Health Services Administration workforce would stay on board, per that plan. At the CDC and NIH, 39 percent and 23 percent of each respective agency’s employees would remain in place.

In every previous shutdown, Congress has allocated back pay for all furloughed federal employees. Shutdowns, then, don’t save the federal government money. The 2013 shutdown cost the government $24 billion, according to the ratings agency Standard & Poor’s.

Agency staff have some limited discretion to interpret the statutes that govern which employees can continue to work. Staff whose jobs are funded by mandatory appropriations or by outside spending — like some of those involved in the FDA’s user-fee-funded programs — can generally keep working. So, too, can staff whose work relates to “activities that involve the safety of human life and protection of property,” per several earlier contingency plans.

When asked to comment on this year’s plan, the FDA, CDC, and NIH referred STAT to the Office of Management and Budget, which did not respond.

The last government shutdown — which lasted for 16 days in October 2013 — sheds light on just how far flung are the consequences of congressional inaction, especially for health companies and public health workers. STAT talked to former officials at the FDA, CDC, and NIH about how that shutdown affected the work they could do.

A shutdown would have widespread ramifications across the FDA — though in some centers more than others, according to agency documents and interviews with former staff. In 2013, nearly all of the agency’s food safety inspections ceased, along with most of its lab research aimed at informing public health decisions. So did the agency’s efforts to keep drug labelling information up to date and accurate.

The drug approval process was also impacted by the shutdown, Hamburg said.

“As you know, [industry-funded] programs could continue, but there were delays, advisory committee meetings had to be canceled, review teams were juggling many more tasks [and therefore] less focused and responsive,” she said.

But not everything ground to a halt. Three days into the shutdown, Pfizer announced that the agency approved the drug Duavee, right on schedule. Gilead, too, told STAT that the shutdown did not impact the timing of the FDA’s advisory committee, which met the week after the shutdown to discuss one of the company’s products.

Jill Hartzler Warner, who at the time was the associate commissioner for special medical programs at FDA and now works for an industry consulting firm, said that the agency was struggling in general to make decisions about the slew of orphan-drug-designation requests, and that “that just gets exacerbated when you have a shutdown.”

READ MORE: Trump’s zeal for deregulation could gum up the FDA, experts say

Some of that strain might depend on which staff the FDA considers “essential,” a judgement senior officials are empowered to make for the staffers they oversee, according to former senior officials. It’s unclear how early they start to prepare for a shutdown — one former senior official, who requested anonymity, started planning about a month early, while another said he only had a few days to get ready.

This wasn’t the agency’s first time in financial peril — just two years earlier, in 2011, the government faced the threat of a shutdown in April. The former senior official who declined to be named said that, during that shutdown scare, the agency had gone through many of the necessary steps, identifying which employees would need to work and notifying the rest. So when the real thing happened in 2013, “we at least had a head start on dealing with some of the administrative and procedural hurdles.”

During the 2013 shutdown, staff responsible for updating drug labels were sent home, said Dr. Taha Kass-Hout, who at the time was the agency’s chief informatics officer. That meant that pharmaceutical companies were sending in updated information about their products, which might have included information about the drug’s safety, but the public wasn’t seeing it.

Even if Kass-Hout was able to find someone to update the drug label, that information wasn’t flowing into a database maintained by the NIH that, per its name, is supposed to be updated on a daily basis.

In 2013, the CDC shuttered most of its annual seasonal influenza program during the shutdown. It largely stopped tracking disease outbreaks across the country, ceasing communications with the local officials and clinicians who help the federal workers connect the dots when an outbreak might be growing. It stopped testing most incoming samples and specimens to ensure safety, and it largely stopped monitoring infections at airports around the country, according to documents and former agency staffers.

Frieden, the former CDC director, remembers his shock at just how empty the CDC labs could be.

“I walked to our core facility, our central lab hub and it’s usually bustling with people doing tests, making up reagents, diagnosing things, and it was empty — I felt like I was in a science-fiction movie. CDC was deserted,” he said. “Not only was it empty, but one of the machines was beeping — and I’m not a laboratory technician, I had no idea why it was beeping. … It was just a reflection of a CDC that was usually bustling and it was just empty.”

He remembers, too, boxes and boxes of patient specimens — sent to CDC for testing and diagnosis — just “stacking up.” It was a “mess,” he said. 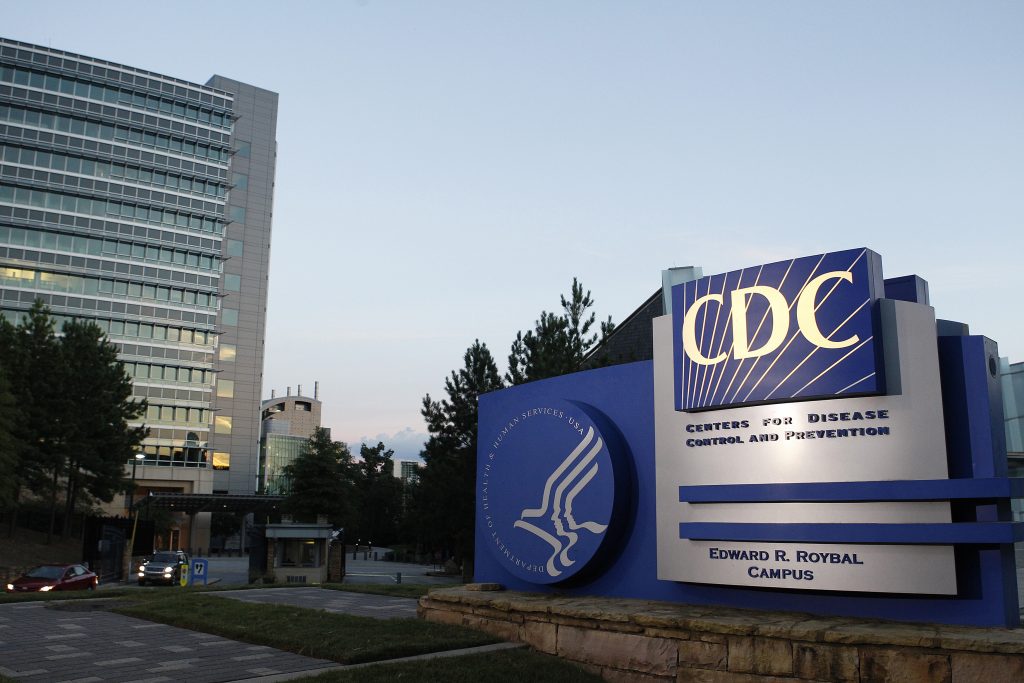 A general view of the Centers for Disease Control and Prevention (CDC) headquarters in Atlanta in 2014. Photo by Tami Chappell/File Photo/Reuters

As the shutdown progressed, remaining staff at the CDC were working with OMB, seeking clearance to bring back some of their colleagues to help resume critical functions, according to Ed Hunter, who was director of the CDC Washington office during the last shutdown. He is now CEO of the de Beaumont Foundation.

“A lot of [office] plants died during that time, and we were always worried there were going to be a lot of people that died, too,” Hunter said. “There’s a system that nobody really notices that day in day out is making sure people’s food is safe and helping educate people about getting their blood pressure tested, working with states and localities on tuberculosis patients and whether they’re allowed to move across borders or whether patients need to be quarantined,” Hunter said. Still others, he said, might be overseeing the quality of lab tests for screening newborns. “There’s a thousand things that happen every day that no one pays any attention to, and it’s just not a really great public policy choice to say, ‘Yeah, not this month.’”

At the end, though, both Frieden and Hunter said the agency felt it had “dodged a lot of bullets.” Luckily, there were no massive, undetected outbreaks or bioterror attacks, no tragedies that couldn’t be averted during the spending impasse.

Both also said repeatedly, however, that the most lasting impact of the shutdown was on staff morale. It got harder to hire people willing to take a less certain job. And it also got harder to convince people that the work they did was essential, when, at least legally speaking, it wasn’t.

“These are all workaholics. It’s all people who love their jobs. They could make twice as much in the private sector, but they work at CDC because they love it,” Frieden said. “Not only are they told they’re not essential, they can’t even do their work on their own time — and they’re going to come back and have this flood of disastrous work they have to do.”

If the government does shut down this week, it will do so in the midst of a one of the worst flu seasons in recent years. That could change whether the influenza decision is considered “essential,” according to the former officials.

At the NIH, it was patients who were most directly impacted by the shutdown in 2013.

Collins, who helmed the agency then as now, estimated that each week of shutdown the agency turned away about 200 patients hoping to enroll in a clinical trial at the agency’s Clinical Center. More than two dozen were children with cancer, per a Washington Post report at the time.

“How would you feel, as a parent of a child with cancer, hoping that somehow NIH and its clinical center might provide some rescue from a very difficult situation, to hear that, frankly, you can’t come, because the government wasn’t able to stay open?” Collins told NPR in 2013.

This article is reproduced with permission from STAT. It was first published on Jan. 17, 2018. Find the original story here.

Erin Mershon covers the politics and policy of health care for STAT in Washington.