How has public opinion about abortion changed since Roe v. Wade?

Most Americans think women should have legal access to abortion, and that opinion has shifted little since the U.S. Supreme Court ruled in favor of women’s reproductive rights more than four decades ago.

In 1973, the U.S. Supreme Court ruled in Roe v. Wade that a woman had the right to abortion. Since then, public opinion hasn’t shifted much.

“The public is very clear — they do not want an overturning of Roe.”

Two years after the court’s decision, 54 percent of U.S. adults said they supported abortion under certain circumstances and another 21 percent said abortion always should be legal, according to Gallup polling from 1975, while 22 percent of Americans said it should be illegal.

“The public is very clear — they do not want an overturning of Roe,” Saad said. 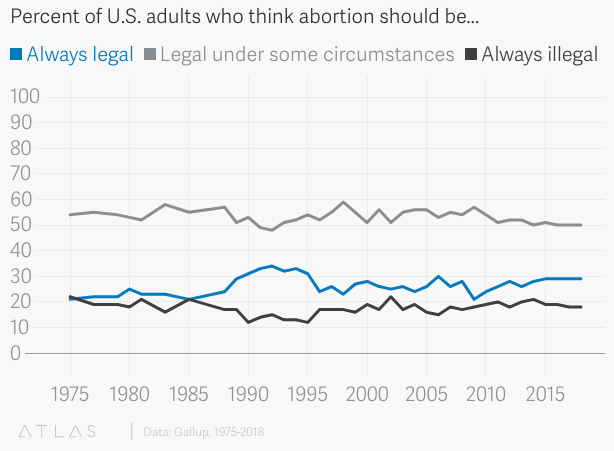 Again, those numbers showed little change from 2014, after the Affordable Care Act was fully implemented. But a gulf of opinion exists between some states and the rest of the nation, said Gregory Smith, associate director of research at Pew Research Center.

Most states are sticking to their opinions when it comes to abortion. When Smith compared state responses in 2014 to those in 2007, he said 38 states showed an opinion shift of 5-percentage points or less.

“There are big differences in people’s attitudes about abortion from state to state,” he said.

States are a critical battleground for abortion rights. In May, Iowa Governor Kim Reynolds signed the “heartbeat” law, banning abortion after six weeks. In March, Mississippi Governor Phil Bryant praised the state’s ban on abortion after 15 weeks, tweeting “This common-sense, pro-life law will help us make our state the safest place in America for an unborn child.”

“There are big differences in people’s attitudes about abortion from state to state.”

This concerns abortion rights advocates, including Dr. Willie Parker, who performs abortions in Mississippi at the only clinic in a state of 2.9 million people to do so.

“You take women in a desperate situation and make their situation more desperate,” Parker said of abortion bans.

Nash and other experts see these state bans setting the stage for a Supreme Court showdown. On June 27, Supreme Court Justice Anthony Kennedy announced his plans to retire, giving up his seat as the court’s swing vote. Then, on July 9, President Donald Trump nominated Judge Brett Kavanaugh, whose confirmation hearing is expected to happen later this summer. Questions were swiftly raised about what this means for abortion rights and whether Kavanaugh might vote to overturn Roe v. Wade. Kennedy sided with liberals to uphold the decision in 1992.

While abortion divides the public, Smith said most Americans think abortion should be legal and that “is a pretty consistent picture over time.”

Left: Over the last seven years, states have enacted more than 400 bans, setting up a series of cases that could lead to a Supreme Court showdown.