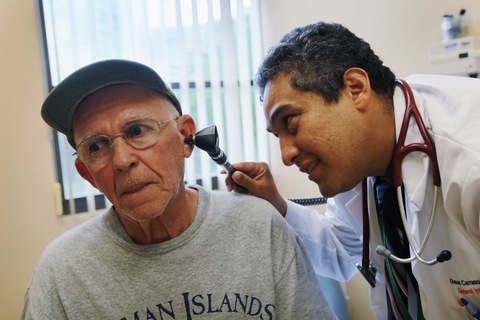 In terms of keeping promises, Wednesday’s vote to repeal the health reform law stands as a significant checkmark on the House Republican agenda, but what does it mean outside of Washington? Maybe not as much as GOP leaders hope.

The overwhelming number of 12 Patchwork Nation community types are not especially interested in repealing the new law, according to an analysis of a new survey from the Pew Research Center for the People & the Press.

Only two county types — the Church of Jesus Christ of Latter-day Saints-adherent heavy Mormon Outposts and the socially conservative Evangelical Epicenters — are close to or above 50 percent in the number of people who say they want the law repealed. In the other 10 county types with a wide range of demographic and voter makeups, solid majorities say they would like to see the health care law expanded or left alone.

Does that mean the repeal vote, certain to be ignored by the Democratic Senate, was a waste of time for the House Republicans? Not necessarily.

When people are given three choices on the reform bill — expand it, repeal it or leave it as is — many communities are pretty divided and in some places a plurality says it would like to see the law repealed. One of those community types is the swing-voting Monied Burbs, which will be crucial to both parties in 2012.

If you look at the numbers a little more closely, you might see the outlines of a possible wedge issue for the next presidential race. 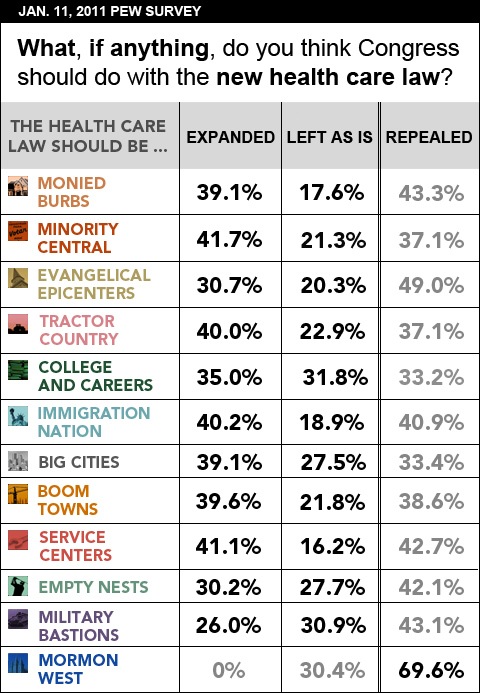 Considering all that has been made out of how divided Americans are supposed to be about health care reform — and the role that supposedly played in the midterm vote, as the GOP contends — how does one explain these numbers?

Well, by some measures people are unhappy with the law. If you ask people whether they approve or disapprove of the legislation, large majorities in more than half of the 12 Patchwork Nation community types say they disapprove. But some of that disapproval may be for different reasons — some may want a broader bill — and, regardless, disapproval does not necessarily mean you want the law repealed.

And in truth, when you get beyond the loud political disapproval in some places, there are a lot of communities in Patchwork Nation that might have good reason to like expanding health coverage.

The two community types that are the most in favor of expanding the bill — Minority Central, with large black populations, and small-town Service Worker Centers — are less wealthy than the national average. They also tend to be places with many uninsured as jobs that don’t pay well often don’t offer many benefits.

Patchwork Nation has seen this up close in Lincoln City, Ore., a Service Worker Center we have been visiting for three years. There health insurance — or the lack thereof — consistently ranks as a major problem as we noted in the book, “Our Patchwork Nation.”

“No one has health insurance,” Kip Ward, the owner of Lincoln City’s Historic Anchor Inn told us. And on a trip to Lincoln City in 2009, the NewsHour focused on the strains in the health care system in the area.

There is also slightly more support for expansion than repeal in the Boom Town counties, that have fallen on hard times since the housing crash.

Not Necessarily That Easy

It’s tempting to look at those numbers as think the repeal vote was, ultimately, not a good one for the GOP. But the sentiments in the Monied Burbs are worth noting.

A large number of people there — 43 percent — said they favored repealing the law. That’s not a majority but it is high compared to other places. That’s significant because those counties tend to be quite moderate in their political attitudes overall. The swinging vote in them indicates voters there are less ideological overall.

So why the strong feelings there? Because, when it comes to health care, those places are the flip side of the Service Worker Centers. More people have good jobs that pay well and offer benefits. The Burbs, in other words, are probably the places least interested in changing the current system. For many here, the system works fine overall.

And that 43 percent is important because those voters in the middle — the 17 percent there who say the health care plan should be left as it is — may not big supporters of the bill, but rather voters taking a wait and see attitude. They could move into either camp but as the unemployment picture improves in the Burbs in the next year, as we have noted it is likely to do, there may be less interest in altering the current, pre-health care bill system.

The Burbs went heavily for Barack Obama in 2008. If he is going to be re-elected, he will almost certainly need to win them again. They went to the GOP in the House races in 2010 and the Republicans may believe the heath care repeal plan will help at least split the vote in the Burbs in 2012.

Of course, much of the opinion on the health care bill is going to fluid for months. The majority of it has not even taken effect yet. And there may be a risk for the GOP in doing too much on the repeal effort.

The No. 1 issue in the midterm elections was the economy and this poll seems to show at the very least mixed feelings of the health care bill almost everywhere. The Monied Burbs, in particular, will bear watching as the new Republican House majority feels its way on the issue.