Irving Berlin’s life was the stuff that Tin Pan Alley dreams were made on. “Irving Berlin has no place in American music; he is American music,” legendary composer Jerome Kern once wrote. Yet for his final 25 years, Berlin led a rather reclusive existence, holed up in his townhouse at one of Manhattan’s tonier Upper East Side addresses.

The hyper-prolific songsmith died 32 years ago this week in 1989 at age 101. But his American story began when Moses Beilin, a poor cantor without a congregation, his wife Leah and their six children escaped the Russian Empire in 1893. The family, including 4- or 5-year-old son Israel, traveled first by foot and rail for Hamburg, Germany. There, the family endured medical inspections, cheap housing and bad meals until they finally procured steerage class tickets on a steamship to the United States. After passing through Ellis Island, opened just a year earlier, the Beilins made their way to the Lower East Side of New York City. An epidemic of typhus fever and another of cholera had spread through the blighted neighborhood in 1982, and health officials had assumed without much evidence that they had been imported by immigrant Jews. Both epidemics were but one sign of the many challenges residents would face in starting their lives in a new country.

The Beilin family lived in a crowded one-bedroom tenement apartment on Cherry Street. What little natural light came through the windows of the tiny apartment was accompanied by the noisy construction of the Williamsburg and Manhattan bridges overhead. During the day, when the children were out at school, Leah Beilin earned a bit of extra money by renting out cots in her living room to night workers who were just coming off their shifts.

Izzy, as he was now called, loved making music. While still a boy, he found jobs as a singing waiter in a seedy tavern called the Pelham Café in Chinatown. In 1907, Izzy co-wrote his first song, with Nick Nicholson. It was a syncopated ditty called “Marie from Sunny Italy.” The lyricist credit incorrectly listed him as “I. Berlin,” and thereafter was known as “Irving Berlin.”

By 1911, he revealed his mastery of the eight-bar form by writing the words and music to “Alexander’s Ragtime Band.” It was his first hit song.

Berlin never learned to read music and was so clumsy at chord changes on the piano that he could only play in the key of F-sharp. Underneath the keyboard was a special transposing lever that made the key changes for him. When he became more successful, he hired a series of musical secretaries to transcribe the tunes that seemed to leap out of his mind. With this system in place, he wrote the words and music for more than 1,500 songs, many of them etched into our collective consciousness: “White Christmas,” “Easter Parade,” “God Bless America,” “Blue Skies,” “Cheek to Cheek,” “Always,” and the scores for dozens of original Broadway musicals and Hollywood films.

Rabid news coverage of his two marriages may have fueled his seclusion. His first wife, Dorothy Goetz, contracted typhoid fever during their honeymoon in Cuba and died five months later, upon their return to Manhattan. He wrote the song “When I Lost You” right after Dorothy’s death that year, and the sheet music sold more than a million copies. When reporters demanded to know if it was autobiographical, Irving refused to answer. Berlin was said to have never gotten over the loss. 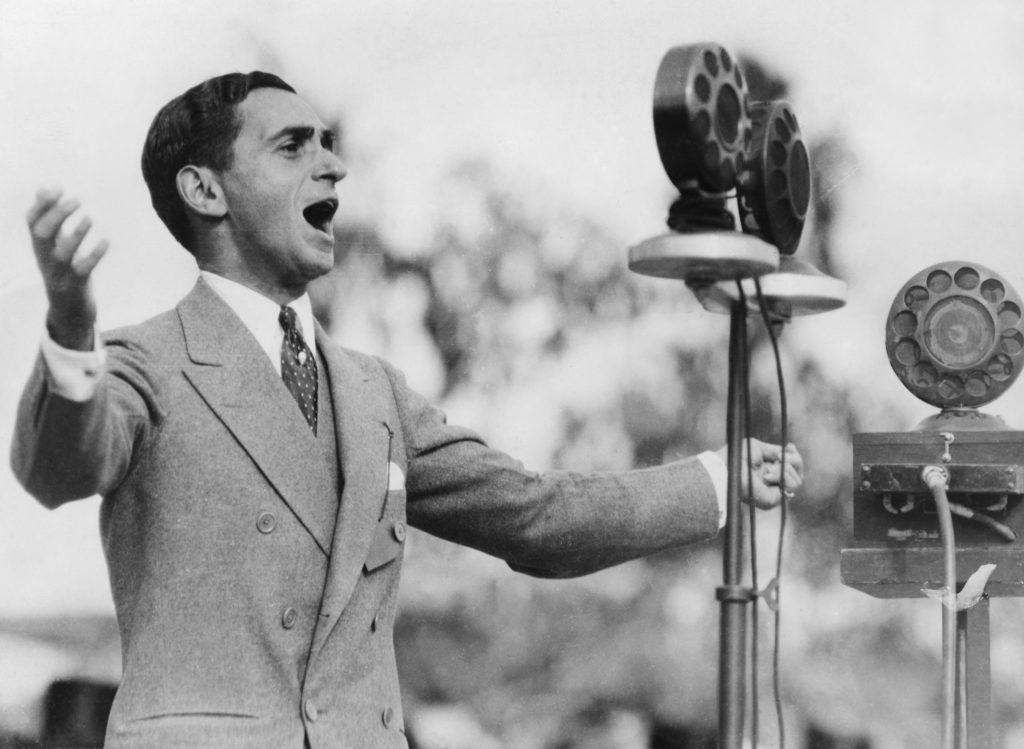 Irving Berlin sings at the dedication of the Los Angeles City Hall in 1928. Photo by Getty Images

His 1926 courtship and marriage to Ellin Mackay, a wealthy flapper and socialite whose Catholic father disapproved of their union, was the stuff of front-page columns and constant paparazzi, before that was even a word. Berlin, always a quiet and reserved man, hated all this attention and did his best to discourage it, despite being a show business icon.

Like many successful creators of popular culture, Berlin’s career eventually waned as tastes changed. His arc turned south shortly after his 1946 Broadway hit “Annie Get Your Gun.” After “Miss Liberty” flopped in 1950, he went into a deep depression. As his daughter Mary Ellin Barrett recalled, he “was gloomy a lot of the time.” His active career hit rock bottom in 1962 with the closing of his short-lived musical “Mr. President.” From then on, he insisted on remaining out of the public eye, except for a few video appearances.

In her memoir, Mary Ellin Barrett described her father as becoming a recluse “little by little” during the late 1970s, after many of his friends and associates began dying. The process only accelerated when his grandchildren and great-grandchildren grew up and began pursuing their own lives. At this point, Berlin began using the telephone as his exclusive means of communicating with his younger friends and children each day.

To intrusive strangers, reporters, biographers—and especially show biz hacks seeking to use his songs for their own ends—he seemed gruff, “a disagreeable, out-of-touch old man who said no and guarded the use of his songs, of everything that had to do with him beyond reason,” Barrett wrote. After President John F. Kennedy’s murder, the Vietnam War and rise of the social protest movement, Berlin admitted his public irrelevance. Indeed, he revealed a deep understanding of how time had passed him by: “It was as if I owned a store and people no longer wanted to buy what I had to sell…Music changed too. The Beatles and other groups reached audiences I couldn’t. It was time to close up shop,” Berlin said near the end of his life.

He likely suffered from depression, which attacked him at various points in his life, especially as he got older — a common problem among the aged — in an era before effective antidepressant medications. As Berlin progressed into his 80s and 90s, he developed difficulty walking because of arthritis. According to biographer Lawrence Bergreen, Berlin was taking ever-increasing doses of Nembutal, a barbiturate then commonly overprescribed by doctors, to treat his chronic insomnia. By his final days, he was likely an addict to this medication and several other prescription drugs. He was also concerned about his physical appearance, wrinkles, and the distortions of age, which were especially obvious under the gaze of a television camera.

Once the songwriter of the nation, literally the pulse of the U.S., now Berlin was an old man, staring out the window.

Once the songwriter of the nation, literally, the pulse of the U.S., now Berlin was an old man, staring out the window, as life passed him by.

He died in his sleep on Sept. 22, at age 101, probably of a heart attack, if not a broken heart. The morning after his death, the front page of the New York Times declared that Berlin had “set the tone and the tempo for the tunes America played and sang and danced to for much of the 20th century.”

If America could let go of Irving Berlin so easily, what chance do mere mortals have at leaving behind a legacy? In fact, his influence remains embedded in the DNA of our mythic American dream, an encouraging blue sky even on a blue day.