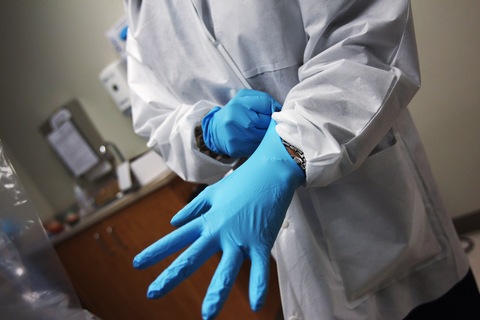 Family insurance premiums have risen by a modest 4 percent for the second year in a row, a new survey finds. But a growing number of workers are feeling the pinch of deductibles of at least $1,000. Photo by John Moore/Getty Images.

Nonetheless, workers are likely to feel an increased pinch from health care costs: More than a third have annual deductibles of at least $1,000 this year before their insurance kicks in, while wages continue to grow far more slowly than health insurance costs.

The average family plan premium topped $16,000 for the first time, with workers paying on average $4,565 toward that cost, not counting copays and deductibles, according to a survey of about 2,000 employers released Tuesday by the Kaiser Family Foundation and the Health Research & Educational Trust.

The average cost of a single employee’s insurance premiums rose 5 percent, to $5,884, with workers paying an average of $999, the survey found. Workers’ wages increased 1.8 percent on average, while general inflation rose 1.1 percent. The survey was done between January and May of this year.

“The premium increase this year is very moderate, but the pain factor for health insurance cost has not disappeared,” said Drew Altman, president and CEO of the foundation. “Over time, what people pay for health care has dramatically eclipsed both their wages and inflation.”

The increases documented in the report, moderate by historic standards, come amid ongoing debate over the federal health law’s ability to rein in health care costs. In July, the Obama administration granted a one-year delay, until 2015, in the requirement that employers with 50 or more workers offer coverage or face a fine, prompting Republicans to call for a similar delay in the rule requiring most individuals to carry coverage. Critics and opponents have also sparred over whether the health law will slow premium growth. All sides may find fodder in the report, observers say.

“You will have the administration and the Democrats saying, ‘Look how the health law is helping moderate health cost increases,’ and Republicans and those against the law will say, ‘It hasn’t done anything because costs are still four times inflation,'” said Paul Fronstin, director of the Health Research and Education Program at the Employee Benefit Research Institute, a nonpartisan Washington think tank.

“One of the changes in this report is the growth in deductibles,” said economist Paul Ginsburg of the Center for Studying Health System Change, a nonpartisan research group in Washington. The deductibles were likely “a factor behind the premium increase being as low as it was.”

Workers in small firms with three to 199 employees face an average annual deductible of $1,715 compared with $884 for those in larger firms.

Small businesses generally see more volatile insurance premium rates than larger firms. Scott Hauge, who runs an insurance brokerage firm in California, says his clients have seen increases averaging around 10 percent a year for the past seven years. He doesn’t dispute the findings of the survey, but added that “small businesses are not seeing those minor increases.”

Analysts say premium increases are cyclical, with periods of rapid increases, such as the double-digit hikes that marked the late 1980s and the early 2000s, followed by periods of slower growth. Since about the mid-2000s, rate increases paid by employers fell below 10 percent each year, with the smallest annual growth tracked at 3 percent in the 2009-2010 employer survey. In what surprised many analysts, rates jumped by 9 percent from 2010 to 2011 before moderating the past two years to around 4 percent.

Some employers say changes associated with the health law, such as a provision allowing adult children to stay on their parents’ plans until age 26, are adding costs.

“We’re all seeing it,” said Forrest Cook, vice president of human resources at NCP Solutions, a 350-employee company in Birmingham, Ala. “We have around a 5 percent to 6 percent increase this year. Before that, our costs held steady for about three or four years.”

Cook was also concerned with the uncertainty surrounding the health law, such as the year delay in the requirement that large employers provide health coverage or pay a penalty.

His firm does not require workers to pay a large sum before their insurance kicks in because “when you have a high deductible plan, it’s going to discourage people from using it,” Cook said.

But the firm is enthusiastic about wellness programs, as are 35 percent of employers in the survey, who consider them an effective strategy for controlling costs. Such programs range widely, from providing small gifts to employees for filling out a health risk questionnaire, to offering large reductions in premiums for workers who get screened and meet certain goals for weight, blood pressure, cholesterol or blood sugar. The federal health law allows employers to increase those financial incentives from 20 percent of the cost of the health coverage to 30 percent.

NCP offers workers financial incentives to participate in wellness programs, including getting flu shots and checking for such things as high blood pressure. Those who sign up for a stop-smoking class get credit for paid time off, Cook said. And the firm discusses health costs with workers.

“We’re very honest about the cost of our plan,” said Cook, whose firm is self-insured. “We tell people if you control the cost of the health plan, if you’re lively and well, it will cost us less.”

Do you have questions or concerns about Obamacare? Leave them in this Public Insight Network form, and the PBS NewsHour will try to answer them in the weeks ahead.