How to Improve Medical Care? Doctors’ Group Counts the Ways 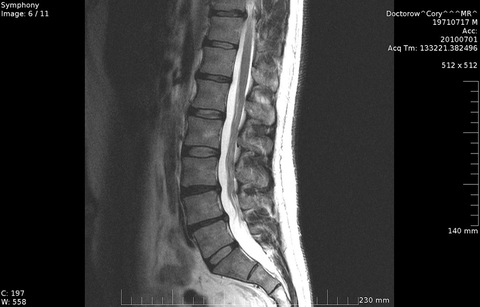 A MRI of a spine is shown above. Spinal imaging is part of the National Physcians Alliance recommendations. Photo by Flickr user Cory Doctorow.

It might not be “Late Show” material, but the National Physicians Alliance is hoping its new David Letterman-inspired Top 5 Lists in Primary Care will still grab Americans’ attention just the same.

For example, the NPA’s No. 1 way to improve pediatric care while slashing costs is … “Don’t prescribe antibiotics for pharyngitis (sore throat) unless the patient tests positive for streptococcus.”

The Top 5 in Primary Care, which includes family medicine, internal medicine and pediatrics, are designed to be short, pithy reminders to physicians and patients alike of practices that offer significant health benefits while also reducing risks, harms and costs. The recommendations run the gamut from warnings about the high costs associated with unnecessary EKGs to reminders about the link between cancer and CT scans for children.

Many of these measures have been commonly accepted and even more commonly ignored for years now, said Dr. Stephen R. Smith, lead author of the report that was published online Monday afternoon and is slated to appear in the Aug. 8 edition of Archives of Internal Medicine.

Check out Top 5 lists for ways to improve internal medicine and pediatrics at the bottom of this post.

An overly cautious approach to health care on the part of patients and a fear of malpractice suits by doctors among other factors have led both parties to opt for procedures that are “wasteful, ineffective and sometimes even unsafe and harmful,” he said.

For example, prescription antibiotics for viral sore throats and imaging for low-back pain within the first six weeks of symptoms have both proven to be ineffective at improving health outcomes in most cases. Yet both are widespread.

Similarly, there is little evidence that over-the-counter cough and cold medication does anything to reduce coughing or shorten the duration of an illness, the report shows. And despite the fact that it can cause adverse effects – even death – in children, 10 percent of them use it every week.

If promoting these practices leads to significant health benefits and helps reduce risks, harms and costs, why do doctors need convincing to practice them?

DR. STEPHEN R. SMITH: I think there’s probably multiple reasons for that. One that we heard from our field testers – although they said that yes, the evidence is absolutely there to support these recommendations, we’re going to have trouble implementing them if our patients don’t agree. So there’s at least a feeling among many doctors that the patients expect certain things. For example, there’s literature that says when doctors are polled, they have an opinion that a high percentage of patients actually want antibiotics for viral sore throats. When investigators have actually talked to the patients in-depth, that’s really not the story. Patients say, “Well I want to get better. And I understood that antibiotics help me get better.” Not understanding that for viruses — unlike a strep throat – it’s not going to help at all. And when you explain this to patients, they understand.

The other (misperception), I think, is that the evidence supporting these recommendations may not be fully appreciated by doctors even though there are scores of studies that support the recommendations we made. But they haven’t come in a way that has been effectively communicated to doctors. This is the one thing that we’re hoping to do with these Top 5 lists.

Might fear of malpractice lawsuits be one of the reasons that doctors have taken some of these precautionary steps?

SMITH: It may be so. But I think that by having a national organization like the National Physicians Alliance come out with these top 5 lists and show that they’re supported by the science, it will give doctors more confidence to do the right thing. If doctors do things the way they ought to do them, the chances of a successful suit, I think, are extremely remote. For many of the recommendations, I actually think it’s going to provide safer care for the patients. For example, in the pediatrics list, we talk about not getting CT scans of children with minor head injury without loss of consciousness and so on. It’s been shown that the radiation that is given to kids can actually end up causing brain cancers. So following these recommendations will not precipitate malpractice claims, I think it will actually be better and safer for patients.

Which of the Top 5 do you think the public will find most surprising?

SMITH: You could almost take your pick. I know some good friends who asked me about how come they get an EKG every year when they go to see their doctor. They think maybe there’s some reason to it. There isn’t – other than the financial one for the doctor. (Regarding) low-back pain, I’ve had patients come in with acute onset of low back pain and want an MRI and somehow think that getting the image is going to change their treatment. So I think communicating to people that acute low back strain needs to be managed conservatively regardless of what the images show. There’s really no point in spending $3,000 on an MRI when you’re not going to change your treatment.

Why would physicians persuade patients to opt out of these expensive procedures when they have a financial incentive to perform them?

SMITH: I was going to put this on a blog that I’m doing for the American Board of Internal Medicine Foundation next month, but I’ll give you a preview. When I was a young doctor – and this was like 35 years ago and I was just starting out practice with an older physician – he had this antiquated EKG machine. It wasn’t working too well and I really pushed at him hard to buy a new machine. And they weren’t cheap. So he finally gave in and he bought a new machine. And I discovered after a few months of this new machine that I was ordering a heck of a lot more EKGs than I had ever ordered before. And I kind of stopped and kind of took an honest look at what I was doing and realized that I had let my clinical decision-making be shaded by wanting to prove to my colleague – who owned the practice – that this was a good investment that he had made and he was recouping his investment rapidly. And I realized that was wrong. And once I did that, I readjusted my criteria for ordering EKGs to ones that were much more sound. I don’t think that it is necessarily a very overt decision based on economics that the doctor makes. It’s more subconscious, but there. But we (need to) confront doctors with this and say, “Stop and think about what you’re doing – it’s not that much of an impact on your practice income. Do the right thing and don’t let the economics influence good clinical decision-making.”

A record 6.6 million seek US jobless aid as layoffs mount