How U.S. Obesity Compares With Other Countries 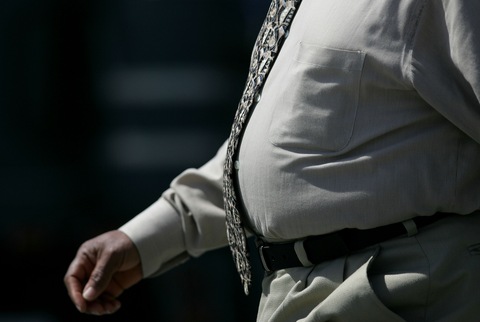 Editor’s Note: This article is the first in a series in which the PBS NewsHour and the Organisation for Economic Co-operation and Development, or OECD, will explore how health care and health policy in OECD’s 34 member countries compare with the United States. Below, Franco Sassi, leading economist for prevention policies at OECD, examines obesity rates.

New data is providing a gleam of hope in an otherwise fairly dark picture. After decades of rapid growth, adult obesity is stabilizing in many developed countries.

In the U.S., Canada and Ireland, obesity is still on the rise, but the pace is slowing. Childhood obesity rates are slowing in the U.S., as well as in England, France and Korea.

Despite these encouraging trends, obesity has become one of the biggest threats to public health in developed countries and increasingly so in emerging economies, especially in urban areas. At least one in two people are now overweight or obese in more than half of the 34 OECD countries — and numbers are set to rise further.

In most countries, obesity is strongly linked to gender and socioeconomic standing, with poorly educated women two to three times more likely to be overweight than those with more schooling. For men, disparities are less prominent and almost non-existent in many countries.

Hover over the bars on the graphic below to see how U.S. obesity rates compare with other OECD countries. Click ‘Next story’ to see how self-reported obesity figures compare with measured rates in each country.

Why do we need to halt the epidemic? Obesity and the chronic diseases associated with it are killers, with severely obese people dying eight to 10 years earlier than their peers.

There is also a financial loss. In Sweden, for example, obese people earn some 18 percent less than others.

But the financial impact itself is mixed. During their life-span, an obese person costs the health care system 25 percent more than a person of normal weight, or up to 3 percent of total health expenditure in most OECD countries (5 to 10 percent in the U. S.). However, due to a shorter life expectancy, overall heath care costs for obese people are not higher than for a non-obese person.

Many countries have stepped up efforts to tackle the causes of obesity. Programs range from counseling by family doctors and nutrition specialists to information campaigns targeting children and parents. In Japan, employees have their waist size measured as part of a compulsory health promotion program organized by their insurance fund. In the UK and Korea, national programs have been launched to reduce the salt and trans fat contents of foods.

The high immediate cost of these information and prevention campaigns, combined with the long lag-time for the benefits to impact health expenditures, have encouraged governments to use economic incentives. In 2011, Denmark introduced a tax on foods containing more than 2.3 percent saturated fats (meat, cheese, butter, edible oils, margarine, spreads, snacks, etc.). A year later, the tax was repealed after complaints that it was damaging small businesses and increasing cross-border shopping.

Other countries, other schemes: Hungary introduced a tax on selected manufactured foods high in sugar, salt or caffeine. In Finland, a tax on confectionery products did not include biscuits, buns and pastries. And for the past year, France has been taxing soft drinks.

Governments can use the extra revenue generated by these taxes to lessen the impact on low-income households or to increase the public health benefits, for example by coupling them with targeted health education campaigns or subsidies on healthy foods. In France and Hungary, at least part of the revenues from the new taxes will contribute to financing health and social security expenditures.

But taxing food is politically controversial and usually incurs strong opposition from the food industry. In addition, tax on food is far lower than on tobacco and alcohol — also major killers. The biggest obstacle to the success of such programs might be the reluctance of many citizens to allow their governments to tell them what to eat.

What is your recipe for a better life? Good health, clean air, nice home, money? Using OECD’s “Better Life Index” tool, rank what you value in life — and see how your country measures up on the topics most important to you.