How Will the Health Law Impact Coverage for Immigrants? 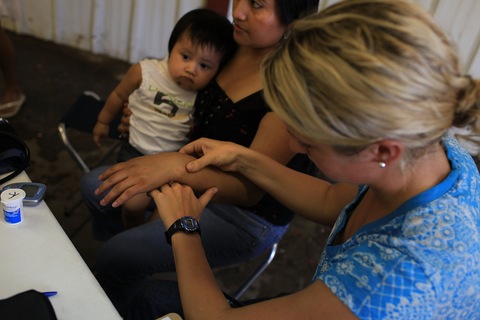 Student Joanna Cambria takes the pulse of a woman inside of a garage at a flower nursery serving as a health care clinic for migrant farm workers in Cheshire, Conn. Photo by Spencer Platt/Getty Images.

The U.S. is home to more than 21 million immigrants who are not citizens, and for many of them, health coverage is a concern. That is partly because so many of these immigrants, both those who came here legally and those who do not have permission to live in the United States, work in lower wage jobs that don’t include health coverage.

As a result, non-citizens are three times more likely to be uninsured than U.S.-born residents, although they represent only 20 percent of the total uninsured.

The health law will help some gain coverage, although those in the country illegally will not get access to federal subsidies or to insurance sold through new state-based exchanges. That omission as well as other decisions by the Obama administration has brought complaints from immigration advocates. Hispanic groups complained about an announcement this summer by the Obama administration that it would not extend the health law’s coverage to young adults who are accepted into a new program granting temporary amnesty to some who were brought to the U.S. as children.


But for those who are not exempt, the health law is expected to boost coverage, either through private insurers or in Medicaid, the state-federal health program for low-income residents. Here are five questions about the health law, immigrants and the medical providers who care for them.

Q. How does the health law affect immigrants who are not citizens and are living in the U.S. legally?

A. Many of the 10 million non-citizens in the U.S. legally are expected to gain health insurance.

Starting in 2014, these immigrants here legally who don’t get coverage through their jobs will be able to purchase health coverage through new state-based marketplaces called exchanges. Since many are in low-paying jobs, they may also qualify for Medicaid, although they are not eligible for that coverage until they have been in the country for at least five years. The federal law expands Medicaid eligibility in all states to people earning up to 133 percent of the federal poverty level, about $14,800 for an individual and $30,650 for a family of four. An estimated 57 percent of uninsured non-citizens meet that income requirement. However, states are reconsidering that coverage expansion because the Supreme Court in its ruling on the health law last summer determined that the federal government cannot penalize states that choose not to expand eligibility.

Legal immigrants earning more than the Medicaid limit could qualify for a federal subsidy aimed at helping people earning up to $44,680 purchase coverage through the exchanges.

Q. Does the health law give coverage or subsidies to illegal immigrants?

A. No. The estimated 11 million immigrants living in the U.S. illegally are not eligible for Medicaid, nor can they qualify for federal subsidies to purchase insurance.

Unlawful immigrants are also barred from using their own money to purchase insurance coverage through the state exchanges. The Congressional Budget Office estimates that about 30 million people will remain uninsured in 2016. According to a report funded by the Robert Wood Johnson Foundation, about a quarter of those uninsured would be illegal immigrants.

They also are not subject to the law’s mandate that nearly all residents carry insurance.

Q. Where do non-citizens — both those here legally and illegally — get medical care now, particularly if they are uninsured?

A. While insured residents generally get coverage through networks of doctors, hospitals and other medical professionals provided by their insurers, uninsured immigrants have fewer choices, particularly for ongoing medical needs. One option is the nation’s 8,500 community health centers, which last year served about 22 million people. About 40 percent of their patients are uninsured, while an additional 38 percent have Medicaid coverage, says Dan Hawkins at the National Association of Community Health Centers. The centers do not ask about immigration status.

Under federal law, hospitals are required to provide emergency room care to everyone, regardless of ability to pay or immigration status. But that care is limited. Generally, emergency rooms provide treatment to stabilize a patient but are not responsible for ongoing needs, such as chemotherapy for cancer, physical therapy for accident victims or prescription medication for chronic illnesses such as diabetes. Some people are able to get those services through individual physicians, safety-net hospitals, community health centers or other charitable organizations.

Q. How does the health law’s treatment of immigrants affect hospitals and community health centers?

Federal payments to hospitals are also going to be reduced. Because they can expect to see fewer uninsured patients as a result of the health law, hospitals agreed to cuts in the federal funding provided to reimburse facilities for caring for the uninsured. Called disproportionate share payments, the money is scheduled to be scaled back by about $18 billion from 2014 to 2020.

Q. How does the ongoing debate in many states over whether to expand Medicaid under the health law affect immigrants who are not citizens and medical providers?

A. About half of the people expected to gain insurance through the law will do so by enrolling in the expanded Medicaid programs. The federal government picks up the tab for the expansion in the first years, but states will ultimately pay 10 percent of the cost for the new Medicaid enrollees. While most states are expected to expand Medicaid eligibility, some are balking, citing the cost. In states that opt not to expand their Medicaid programs, hospitals fear they will face a reduction in their federal disproportionate share payments while not getting the increase in the number of insured patients they had expected. Hospitals have promised to lobby heavily to get lawmakers to expand Medicaid programs in the new state legislative sessions next year.

Congress, too, is likely to be lobbied: The National Association of Public Hospitals and Health Systems, whose members are safety net hospitals serving large number of poor and uninsured, says it wants Congress to eliminate, reduce or delay the funding cuts to hospitals.