How Will the Obamacare Mandate Impact You? 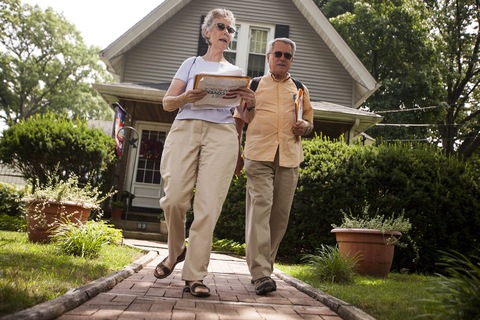 Volunteers with the Get Covered America campaign canvas a neighborhood, informing prospective health insurance consumers about their options under the Affordable Care Act. Photo by Michael Nagle/Bloomberg via Getty Images.

The federal health law’s individual mandate, one of the key building blocks of the insurance overhaul, remains controversial as the October start date approaches for enrolling in new online marketplaces. Individuals who don’t get insurance through work will shop for insurance on these websites for policies that will take effect in January.

The mandate, which requires most people to obtain health insurance or pay a tax penalty, survived a constitutional challenge last year in the Supreme Court but remains under attack by conservatives. In July, the Republican-led House voted to delay the mandate, although the measure is not likely to get a vote in the Democratic-controlled Senate.

Despite all that attention to the mandate, 26 percent of Americans aren’t aware of the requirement or didn’t think the law included it, according to a March 2013 Kaiser Family Foundation poll.

Here are some basic questions and answers about mandate.

If your questions aren’t answered below, submit them to the NewsHour and we’ll try to answer them in the weeks ahead. Here’s how.

What is the individual mandate?

The individual mandate is a provision of the federal health law that requires you, your children and anyone else that you claim as a dependent on your taxes to have health insurance in 2014 or pay a penalty. That coverage can be supplied through your job, public programs such as Medicare or Medicaid, or an individual policy that you purchase. The health law is setting up online health insurance marketplaces, also known as exchanges, to help you shop for plans.

Who is affected by the mandate?

The mandate is aimed at some of the 57 million people younger than 65 who now do not have insurance. The Congressional Budget Office estimates that in 2014 nearly three out of five Americans will have coverage through an employer-provided plan and 12 percent through Medicaid and the Children’s Health Insurance Program, federal-state programs that provide insurance to lower income Americans. If you have insurance in either of those ways, you are not affected. If you are in Medicare, you also meet the requirement.

Are there any exceptions to the mandate?

Yes, the government has identified exemptions. Individuals who cannot afford coverage because the cost of premiums exceed 8 percent of their household income or those whose household incomes are below the minimum threshold for filing a tax return are exempt. People experiencing certain hardships, including those who would have been eligible for Medicaid under the health law’s new rules but whose states chose not to expand their programs, also are exempt.

Other exempt groups include prisoners, Native Americans eligible for care through the Indian Health Care service, immigrants who are in the country illegally, people whose religion objects to having insurance coverage, members of a health care sharing ministry and individuals who experience a short coverage gap of less than three consecutive months.

CBO estimates that in 2016, after the major provisions of the health law are implemented, 24 million people will be exempted from the mandate’s penalties.

Why is there a mandate anyway?

The health law was designed to extend insurance to nearly all people, including those who have medical conditions that require expensive care and are often denied coverage today. But to pay for their care, insurance companies need to have a large enrollment of consumers, especially young and healthy people who use fewer services. The mandate was adopted to guarantee a broad base.

Topher Spiro, the vice president of health policy at the Center for American Progress, a left-leaning nonprofit that supports the law, says it will be more effective with the mandate than without it. “This individual mandate is to keep premiums low for everyone,” he said, noting that “if you don’t have incentives for everyone to sign up for coverage then only the sick people will enroll which will drive up premiums.”

But others suggest the mandate won’t be effective because the penalties are set so much lower than the cost of coverage.

“The mandate was an attempt to get around the fact that insurance is going to become a lot more expensive for a lot of people even with the subsidies,” said Joseph Antos, an economist with the conservative American Enterprise Institute. Antos believes the tax penalty for remaining uninsured is too low and questions the government’s ability to identify those who end up not filing taxes. “I would argue that the individual mandate is largely unenforceable and does not turn out to be this solution to the other problems that raise insurance costs for that particular group of people,” he added.

How do I satisfy the mandate?

Health coverage provided through a job-based plan (including COBRA or a retirement plan), policies that you bought for yourself or your family, Medicare (and Medicare Advantage), Medicaid, CHIP, some Veterans Administration health programs or TRICARE coverage for members of the military and their dependents will satisfy the mandate.

Although the law takes effect Jan. 1, the initial enrollment period continues through March 31. Since people are exempted for a short coverage gap – less than three months – individuals that obtain coverage before the end of March will be exempt from the payment for that period.

How do I report my coverage or exemptions to the government?

You will not have to report your coverage or exemptions until you file your 2014 income tax return, which won’t be due until April 15, 2015. Insurance providers will also be required to help their clients report their health coverage. The Internal Revenue Service says it will put out details later about how the reporting will work.

If your income is so low that you do not file a tax return, you are exempt from paying the penalty.

What happens if I don’t get coverage?

If you do not have the minimum level of coverage and do not qualify for an exemption, you must pay a penalty to the IRS at the end of the tax year. The penalty for the first year is up to $95 per adult and $47.50 per child, or 1 percent of family income, whichever is greater.

The amount you owe will be pro-rated to reflect the number of months you were without coverage.

CBO estimates that 6 million people, about 2 percent of the population, will be assessed a penalty in 2016.

How do I apply for an exemption?

If you are seeking an exemption for incarceration, membership in an Indian tribe or health care sharing ministry, you can apply through the health insurance exchanges or make a claim when you file taxes, according to a final rule issued by the U.S. Department of Health and Human Services. If you are claiming economic hardship or a religious exemption, you must get an exemption certificate from the online insurance exchange. If you are claiming that coverage is unaffordable, you are in the United States without proper documentation or have a coverage gap of less than three months, you can make the claim when you file your 2014 taxes in 2015.

What were the issues in the Supreme Court challenge?

Opponents of the law argued that forcing individuals to buy insurance was unprecedented and could lead to much greater federal intrusions against individual freedoms. Supreme Court Justice Antonin Scalia, in fact, asked during the arguments on the law if such a provision meant the government could force Americans to buy broccoli. Supporters countered that the mandate was part of a long tradition of Congress regulating business trade under the Commerce Clause of the Constitution. In the suit brought by 26 states, the Supreme Court allowed the mandate to stand because a majority of justices, in an opinion written by Chief Justice John Roberts, said it was a tax and Congress has the power to impose taxes.

Where did the idea of the mandate originate?

The origins of the individual mandate have been controversial. Many Democrats who support the law suggest it was originally a conservative idea developed in 1989 by the Heritage Foundation’s Stuart Butler to counter liberals’ efforts to establish a single payer system and impose a mandate on employers to provide insurance. Several years afterward, Republicans used the individual mandate in a bill they offered as an alternative to Bill Clinton’s proposal to overhaul health insurance. The mandate also was incorporated as part of the Massachusetts overhaul of health insurance in 2006 under then-Gov. Mitt Romney.

Democrats later adapted the concept and pushed it as part of the congressional debate over the Affordable Care Act, despite President Barack Obama’s initial reluctance to embrace it. Whatever their prior views, most conservatives opposed the health law’s version of the mandate, and Butler made a spirited argument that the current mandate is not what he was endorsing years ago.