‘I Have Seen My Death’: How the World Discovered the X-Ray 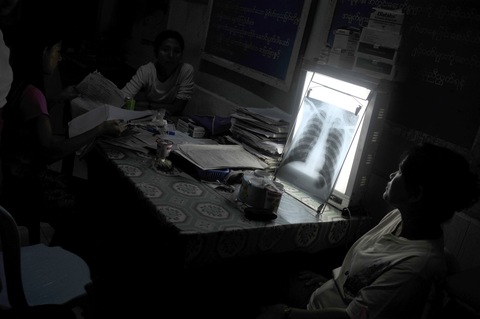 An X-ray of a gunshot victim in Kyauk Taw, Myanmar. Photo by Kaung Htet/Getty Images.

In a regular column on the PBS NewsHour website, Dr. Howard Markel, director of the Center for the History of Medicine at the University of Michigan, will highlight the anniversary of a momentous event that continues to shape modern medicine.

In November of 1895, the phenomenon of electricity and electrons was all the rage. It was around this time that a physics professor at the University of Wurzberg named William Roentgen began playing with a cathode tube featuring a thin aluminum window that allowed some of the electromagnetic rays to escape.

He covered the tube with black cardboard to shield its fluorescent glow, and, shortly after, noticed beams escaping several feet to a nearby plate made of barium platino-cyanide. Secreted in his lab for six weeks, pausing only to take meals, he experimented with other fluorescent screens and photographic paper, the latter a common item in laboratories for purposes of documentation and illustration.

A print of one of the first X-rays by Wilhelm Röntgen, featuring the left hand of his wife Anna Bertha Ludwig. Photo courtesy of Wikimedia Commons.

Roentgen’s “Eureka moment” arrived shortly after noticing that his newly discovered beams passed through opaque objects and affected the film beneath. The results included shadowy radiographs of a set of weights, a piece of metal, and, most famously, the bones of his wife’s hand and her wedding ring. When she underwent the world’s first x-ray on a human, on Dec. 22, 1895, Mrs. Roentgen exclaimed, “I have seen my death.” 

Because he did not know the precise physical nature of these electromagnetic beams, Roentgen referred to them as X-rays. In later years, some preferred the now lost moniker, Roentgen Rays.

Roentgen published his initial findings in late December of 1895. It took a matter of weeks before such news spread around the world and X-rays became the media sensation of the day.

Thomas Edison and others manufactured commercial fluoroscopes, carnivals employed them as novelties for fair-goers wanting a radiograph of their bones, and shoe stores used them to measure the size of feet.

Check out this clip from the 1920s silent film, “General Personal Hygiene”:

Eventually, physicians, surgeons and dentists learned to employ them widely as central tools in their diagnostic arsenal. X-rays, and their progeny such as CT scans, MRIs, and ultrasound, allowed the doctor to check a running engine, so to speak, without ever opening the hood.

In 1901, Roentgen was awarded the first Nobel Prize in physics. It is no understatement that his discovery revolutionized the modern practice of medicine in ways the physicist could have never imagined.