While some parts of the nation are figuring out how to block national health care reform or repeal the law, California has plunged headfirst into making it work. The Republican governor and the Democratic legislature are cooperating to smooth the way for a new approach to insuring and treating million of patients. 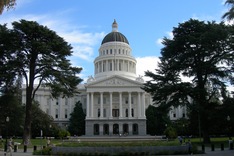 California was the first state to pass legislation this summer, outlining how it plans to set up a health insurance exchange as mandated in the new law. The state has also received a $10 billion Medicaid waiver from the federal government that will allow it to expand its Medicaid program and usher in some other changes in the new bill ahead of schedule.

California Health and Human Services Secretary Kim Belshe, a Republican, sat down with the NewsHour to discuss some of those plans. I asked her why she and Gov. Arnold Schwarzenegger are moving ahead with implementing health care reform while many Republicans around the country are fighting the new law.

But not everyone in California is happy that the state is moving forward with reform. Critics like John Graham, director of health care studies at a conservative think tank, the Pacific Research Institute, says that the plan is “not workable.”
Graham discussed some of his objections with us.

The problem — as I found out while working on our story — is that it is all very complicated. And given it’s complexity, it can be difficult to explain to the public. No one denies that, not even its most vociferous boosters.

One conservative group headed by former Rep. Newt Gingrich put out a wall chart that shows 159 new offices, bureaus, commissions and programs that will implement the changes in what they call “Obamacare.” The chart is huge and contains hundreds of deadlines and processes that government, doctors, insurance companies and hospitals will have to meet. Even if it’s an exaggeration (and many ambitious laws are complicated), or even if most of those deadlines can be met with careful planning, it’s a thicket that critics think can’t be eliminated.

Nonetheless, California’s health planners are giving it their all. Implementing health care reform — and proving it can work– is a major priority of the outgoing Schwarzenegger administration. They think they can navigate through that thicket, find the money to pay doctors and cover poor patients, and organize a complex, detailed and controversial system to take care of the state’s patients. It will take a while — at least four years, perhaps more — to find out if they are right.

We’ll have more on California’s efforts to implement health care reform tonight on the NewsHour.