A decision made by California voters six years ago may well have a bearing on the mental health issues raised by the shooting spree in Tucson, Ariz. 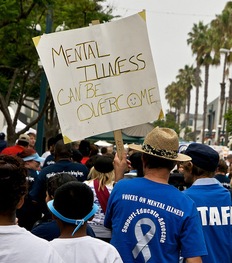 Californians decided in 2004 to impose an extra 1 percent income tax for people who made $1 million a year. Some called it a “Robin Hood tax.” The money would be used to support mental health programs, which advocates said were underfunded. The initiative — called Proposition 63 –passed with very little opposition. In the time since, it has raised $6.3 billion- money the state is eyeing enviously in these days of big budget shortfalls.

Besides beefing up mental health services and using a team approach to keep the mentally ill from becoming homeless, Prop. 63 set aside some money for early identification and treatment of mental illness, as well as for innovation. Independent academic evaluations of some of these programs have judged them a spectacular success: dramatically lower arrest rates, lower hospitalization rates and less homelessness among the patients enrolled in Prop. 63 programs.

How the money is spent is up to California’s 58 counties; a few of them are taking the “innovation” mandate seriously and have come up with new programs to improve the lot of the mentally ill. One in particular has drawn attention of late, following the deadly shooting attack in Tucson. All the mental health experts I spoke with – none of whom knew Tucson suspect Jared Loughner but had just read about him – agreed that the shooter was likely mentally ill, probably paranoid schizophrenic, and undiagnosed and untreated.

At the Family Service Agency of San Francisco, a large nonprofit that serves many functions, CEO Bob Bennett decided that by using Prop. 63 money, he could set up an early diagnosis and treatment program for severely mentally ill people, people who may not have had a real onset of schizophrenia yet, but who were displaying symptoms of early psychosis.

And 35 percent of the individuals who have these early symptoms will go on to develop a full psychotic disorder within 2 Â½ years.

Members of Bennett’s family had suffered schizophrenia, and he figured it if you could catch the illness early, you could treat it and head off bad outcomes. He found some programs abroad that had success with that approach, and he used them as models to establish what he calls PREP — Prevention and Recovery in Early Psychosis.

Bennett is convinced had Loughner been referred to his program, it could have made a difference: “He had what’s called paranoid schizophrenia; paranoia is a very common symptom of schizophrenia, and the treatments that we use in our early psychosis program are very effective in addressing paranoia.”

Two years ago, a 17-year-old San Francisco high school student named Andrew showed signs of paranoia and early psychosis. He was referred to the PREP program, and says he is no longer is hearing voices. In fact, he is leading a normal life and applying to college. I spoke with him and his mother, Simone, for a story airing Wednesday on the PBS NewsHour, leaving out their last names for privacy. Here’s an excerpt from that interview.

The treatment includes low doses of medication, cognitive behavioral therapy (as opposed to traditional, Freudian-based therapy that delves into a patient’s past), and intense family and community support. Bennett says the aim “is to turn schizophrenia from being a disease that features crisis after crisis and hospitalization after hospitalization, and long-term cognitive decline and social design … into a chronic disease … where you can lead a normal life.”

So far the program has not been independently evaluated, but the Family Service Agency claims the rate of success is high: only a 10 percent hospitalization rate, a 7 percent dropout rate, and three-quarters of patients in school or working.

It’s a program that bears further looking at, especially when the nation’s attention is still focused on Tucson.