BALTIMORE — The immense new CVS dominates the corner of Pennsylvania and West North avenues. Two smaller pharmacies nearby might both fit inside. One is Keystone Pharmacy, a block away on West North. Care One is five minutes on foot up Pennsylvania.

CVS, its front shelves crammed with brightly-packaged processed foods and household cleaning supplies, is an island of abundance for this West Baltimore neighborhood, one of the city’s poorest.

It’s a contrast that shows what’s changed and what hasn’t in the past year, since Freddie Gray, a 25-year-old black man, died of injuries sustained in police custody, unleashing days of protests. The CVS, just across from the Penn-North metro stop, was set ablaze on April 27, demolished and rebuilt, opening again just last month. Looters trashed Keystone and Care One, though both reopened within days of the protest.

But if 2015’s protests emphasized police brutality and race relations, the absence of more stores like CVS that are easily accessible to people in impoverished, predominantly black neighborhoods underscores Baltimore’s other persistent inequities.

Scarcity defines life in Sandtown-Winchester, the 72-block neighborhood where Gray lived for part of his life. Its roughly 9,000 residents are underserved by primary care doctors, by supermarkets that sell healthy food and by full-service retail pharmacies where anyone can pick up a prescription, buy a bottle of aspirin and a few groceries all in the same trip. No major retail pharmacies have outlets inside Sandtown. CVS, the closest to a real grocery store, is near but outside the neighborhood, as are Keystone and Care One, which don’t offer the same variety. Total Health Care, a local community health center, operates two pharmacies on the neighborhood’s border, but they also lack the non-medical variety of a CVS or Rite Aid.

Some of Baltimore’s middle- and upper-class neighborhoods lack these conveniences too, but people there have cars to get where they need to go. Most people in Sandtown must walk or take less-reliable public transportation. That’s a significant barrier for the elderly and those with chronic illnesses. The community has one of the Maryland’s highest rates of hospitalization for HIV, diabetes, cancer and heart disease. 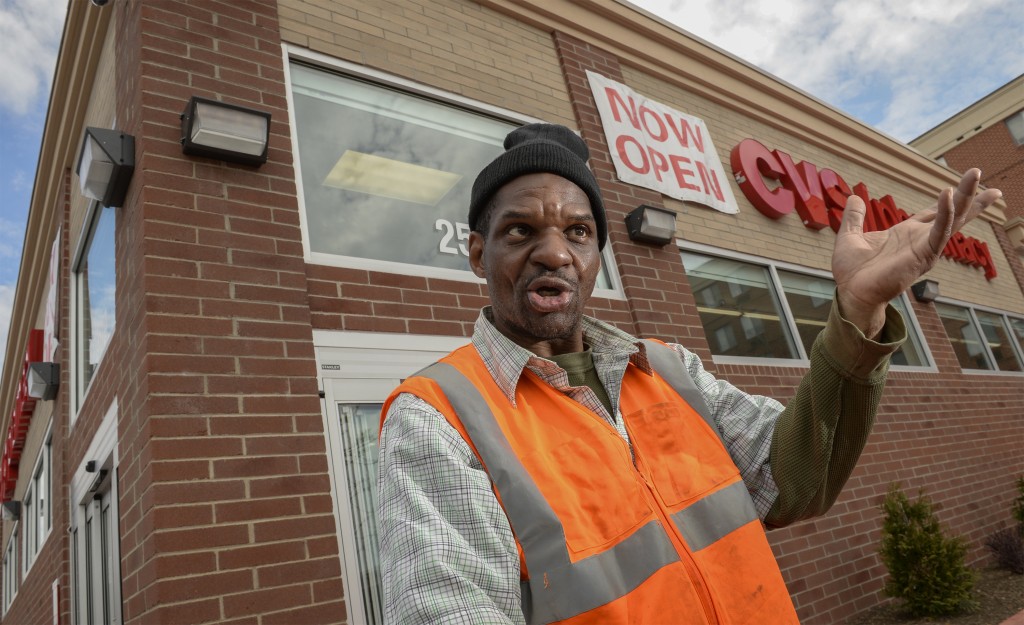 Willie Zuber, 50, says he comes to CVS almost every day. He shops for household good and fills prescriptions; while waiting for medications, he grabs a soda or an iced tea, he said. Photo by Doug Kapustin for Kaiser Health News

“There’s not enough quality pharmacy in West Baltimore,” said Jennifer Joseph, director of pharmacy at Total Health Care, which has 10 clinics in Baltimore, six with pharmacies.

“Things have returned to normal, but normal still isn’t good enough,” said Anthony Pressley, director of community resources at the Druid Heights Community Development Center. Businesses such as pharmacies and grocery stores aren’t lining up to invest in the area, he added, because they assume it isn’t worth it.

CVS’ 10-month closure posed hardship for some customers. Cornell West, 51, said he took a half-hour bus ride to another CVS for insomnia medication and cortisone cream. Allen Johnson, 61, filled prescriptions at Keystone but couldn’t always get what he needed, he said, such as medications for his knees, blood pressure, cholesterol, heart and diabetes.

“That was a problem for the old people. You know what I’m saying? That was a hell of a problem,” Johnson said.

Research suggests that low-income neighborhoods in major cities with higher black and Latino populations are likely to be underserved by pharmacies. A 2014 study in Health Affairs illustrated that pattern in Chicago.

West Baltimore’s shortage of primary care physicians exacerbates the need for pharmacists who can counsel patients about basic health issues. A pharmacist is often the first line of defense for someone with a health condition, said Natalie Eddington, dean of the University of Maryland School of Pharmacy.

Where Pharmacies Are Scarce. In certain Baltimore neighborhoods without retail chain pharmacies — such as CVS, Walgreens and Rite Aid — many residents do not have cars to drive to areas with more stores. Two examples are Sandtown-Winchester and Druid Heights. Source: Maryland Board of Pharmacy and Baltimore Neighborhood Indicators Alliance. Data analysis by Catherine Sheffo/Capital News Service.

“For people who can’t afford health care — they don’t know how to get something,” said Haywood McMorris, the CVS store manager. “They can come here instead of going to the doctor’s and we pretty much take care of it.”

CVS and Keystone compete for that role, but on different scales.

CVS, with 27 stores in Baltimore, is the nation’s largest retail pharmacy chain based on its 9,000 U.S. outlets. It outmatches Keystone, an independent small business, on product variety and supply plus offers better hours. CVS closes at 9 p.m. on weekdays and 6 p.m. on weekends. Keystone closes three hours earlier Monday through Saturday, and it’s closed Sunday. Neither CVS nor Keystone carries fresh produce.

Keystone patrons praise its intimate service and owner Dwayne Weaver’s generosity, sometimes giving them medications on credit when they can’t afford the co-pay.

Argin Henry, 46, shops at both. He goes to CVS for groceries, drinks and goods like toilet paper, but he fills his prescriptions at Keystone, which extends credit when he’s low on cash and delivers prescriptions to his home.

A generous credit policy and delivery service are two ways Keystone competes against its much larger neighbor. CVS is in-network for every Medicaid plan in Maryland. Seven of eight plans cover drugs bought at Keystone, Weaver said. In a week, Keystone might turn away 20 to 25 customers who are out-of-network.

“We kind of survive on servicing patients in a way that chains generally don’t,” he said.

Weaver took over the pharmacy in 1985 and it’s been at its current North Avenue location for about 30 years. CVS has been there since 1997.

Ellis Basnight, who lives a 15-minute walk from Keystone, gets his drugs for diabetes, carpal tunnel and high blood pressure there. 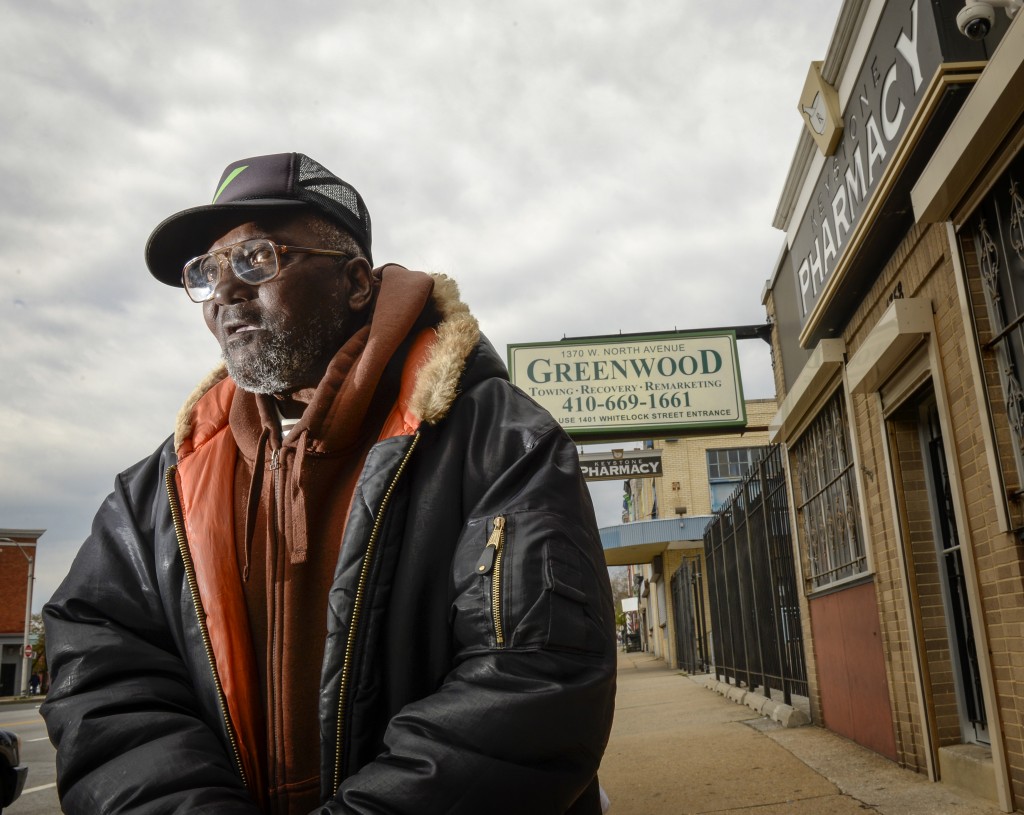 Ellis Basnight, 71, says he relies on the independent Keystone Pharmacy, which is a 15-minute walk from his house. Keystone’s been in the neighborhood for decades, and was one of the stores looted in last spring’s protests. Photo by Doug Kapustin for Kaiser Health News

West Baltimore’s low-income residents do have some alternatives to retail pharmacies, including two clinics of Total Health Care. Patients there can get prescriptions right after seeing the doctor, but retail pharmacies such as CVS can sate their snack cravings too.

Willie Zuber, 50, goes to CVS four blocks from home for groceries and to get medicines for an older woman he said he looks out for. He often grabs a soda or iced tea there while he waits for her prescriptions.

Joseph, Total Health Care’s pharmacy director, said CVS and Keystone likely serve the most people in the area. But they aren’t enough, she added.

Kaiser Health News is a national health policy news service that is part of the nonpartisan Henry J. Kaiser Family Foundation. You can view the original report on its website. Jeremy Snow is a reporter at Capital News Service. CNS reporters Brittany Britto, Ellie Silverman, Catherine Sheffo and Daniel Trielli also contributed. CNS is run by the University of Maryland’s Philip Merrill College of Journalism.

Left: The CVS at the corner of North and Pennsylvania Avenues re-opened a month ago. Residents say it’s crucial not just for pharmacy, but also for routine food and household shopping. Photo by Doug Kapustin for Kaiser Health News