In Wisconsin, the Republican party brought home landslide victories in November — the state went from “a sea of blue to a sea of red,” as the Racine Journal-Times described it, as Republicans won the governorship and control of the state Senate and state Assembly. 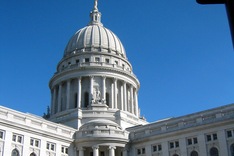 Those victories have led to some new resistance in Wisconsin to the federal health care reform law passed earlier this year. Much of the coverage of health reform has focused on debate at the national level, but states will play a key role in implementing the law. Over the next two nights, the NewsHour will be taking a look at the role.

Tonight, health correspondent Betty Ann Bowser reports from Wisconsin on how the Republican wave could affect the state’s health care reform efforts — incoming Governor Scott Walker has already pledged to join the 20-state suit challenging the law. Then, NPR health policy correspondent Julie Rovner will discuss what parts of the law states began implementing in 2010 — and what to look for next year.