The NewsHour’s global health team is currently in Indonesia, home to the world’s largest Muslim population, to produce a series of stories that will air next month. We’re looking at rising food prices, care for the mentally ill, democratic reforms and the country’s booming economy.

Throughout the week, we’ve spoken with Indonesian citizens about how they view their government, and what they think about the United States under the leadership of President Barack Obama, who spent time in Indonesia as a child. 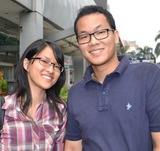 We caught up with Whisnu — many Indonesians go by only one name — and his older sister Anggraeni while they were having lunch in downtown Jakarta. Part of Indonesia’s growing middle class, Whisnu, 28, works for a telecommunications company and Anggraeni, 29, is a supervisor in a mining company office.

They said the Indonesian government is improving and that political reforms have opened up society.

“We can speak freely now. Terrorism is decreasing. Things are getting better,” said Anggranei. Their opinion of the United States has improved recently, they said, because U.S. involvement in overseas wars is on the decline. 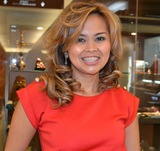 Julia Ambarsari, a 32-year-old housewife, was on her way to buy her son a new “Thomas the Train” at an upscale shopping center in Jakarta when we met her. Her British husband works for an American logistics company in Jakarta and Ambarsari said they are enjoying the fruits of the country’s growing economy. But the weak American dollar has reduced her husband’s paychecks recently, and she cites corruption as a major issue in the country. 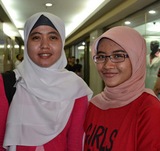 Ainun Mardiah, 24, and Isnatika, 23, are good friends and university students from Bandung who came to Jakarta to watch the “Indonesia Open” badminton tournament.

Mardiah told us, “Democracy here is not ‘for the people.'” For example, she said, the government planned to build a new expensive parliament building, but backed down after there were a lot of protests. Mardiah has a favorable view of the United States as a progressive country, but she doesn’t like that Americans make broad generalizations about Muslims and consider association with Islam as association with terrorism. 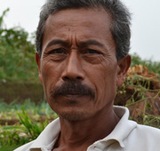 Rojai is a 52-year-old vegetable farmer in the small mountain village of Ciherang, about three hours outside Jakarta. He doesn’t believe the government is doing enough for the people of Indonesia, especially the poor.

“Poor people don’t have a voice. But you gain power in Indonesia through demonstrations. The students in universities have their voices heard,” he said.

He thinks the relationship between the United States and Indonesia has improved since President Obama was elected, and he was very excited about the president’s trip to Indonesia last year. 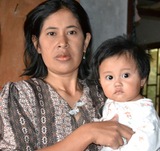 Neng Paridah, 38, lives up the road from Rojai in Ciherang. She has four young children and runs a small shop in front of her house. She’s planning to start teaching preschool to help supplement her husband’s earnings as a farmer.

Paridah thinks Indonesia’s economy is improving overall, but food prices are going up and her family is still earning the same wages.

“People in the government don’t feel the impact of food prices like we do,” she said. She pointed to rising prices for rice and sugar, and said she doesn’t do a lot of frying anymore because the price of cooking oil is so high.

But Paridah said her community has received new subsidies from the government for education, and she feels those opportunities are improving.