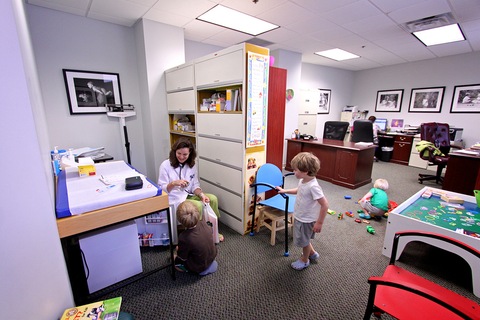 Among the health reform provisions that will go into effect Thursday — on the six-month anniversary of the law’s signing — is a much-touted new rule banning insurers from denying coverage to children because of pre-existing conditions. But this week, several major health insurance companies have announced that, in response to the rule, they plan to scrap their child-only health plans altogether.

Critics say the move is an end-run around a key component of the new law, and that the insurance companies are betraying their promise to support the changes. But industry representatives say that the move is a necessary response to the new rules and that it will still leave children with plenty of insurance options.

Health plans that cover individual children separately from their parents are a very small part of the overall insurance market. The Washington Post reports that administration officials estimate the policies cover between 100,000 and 700,000 children nationally.

Children who are already on individual plans won’t be affected; the companies will simply stop offering the plans to new customers.

Anthem, Aetna, Cigna, Humana, CoventryOne and some Blue Cross Blue Shield companies have announced plans to leave the child-only market in at least some states.

Insurers say the move is necessary, because the new rules will push parents to avoid buying insurance for their healthy children, knowing that they can still buy it later if the child were to become sick.

“While well intended, the current regulation provides a powerful incentive for parents to wait to purchase coverage until after their children become sick, which will drive up the cost for those who are currently insured,” America’s Health Insurance Plans spokesman Robert Zirkelbach said in a statement. “Given the current uncertainty in the niche marketplace for child-only coverage, health plans have to make very difficult decisions about the types of new policies they will offer.”

The administration tried to address that concern earlier this summer by saying that insurers would still be allowed to designate open-enrollment periods for the plans. But insurers were not swayed.

G. William Hoagland, vice president of public policy at Cigna, told Politico that the company would “love to stay in the market.” But, he said, “you can’t have guaranteed issue for this population and be the only one out there. You can’t make it work financially.”

But Obama administration officials say that insurers are breaking their promise to “fully comply” with the new health insurance regulations.

“We expect [insurance companies] to honor that commitment. Insurers shouldn’t break their promise and turn their backs on some of our most vulnerable Americans,” Jessica Santillo, a spokeswoman for the Department of Health and Human Services, told The [Washington Post](http://www.washingtonpost.com/wp-dyn/content/article/2010/09/20/AR2010092006682.html).

The back-and-forth is one more flare-up amid the ongoing tension between the administration and the insurance industry. Earlier this month, Health and Human Services Secretary Kathleen Sebelius chastised insurers for blaming their rate increases on the health reform law.