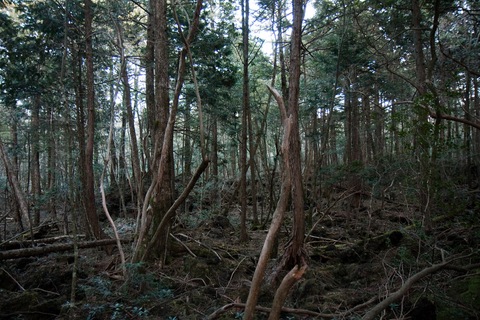 The Aokigahara Forest is a vast, tranquil and densely wooded area at the base of Mt. Fuji known as the “sea of trees.”

But in the last two decades the woods have earned another nickname, the “suicide forest,” and the sad distinction as one of the most popular sites for people to take their lives in Japan.

It’s one of many grim tales from a country with one of the highest suicide rates in the world — volunteers patrolling the cliffs of Tojimbo trying to keep people from diving off, internet pacts ending in strangers meeting to take their lives together, and the newer trend of “detergent suicide”, carried out by creating poisonous gas out of household chemicals.

Japan has a historical tendency to view suicide as a noble end, and public health officials have called in the past for a shift in the dialogue around the issue. The especially high suicide rates seen in Japan over the last 12 years also appear to be linked to negative socioeconomic factors, Yutaka Motohashi of the department of public health at the Akita University Graduate School of Medicine wrote in the Lancet this week.

He analyzed data from 1985 to 2009 and found “suicide rates were significantly correlated with unemployment rates.” He also pointed to deteriorating economic conditions, including the unwillingness of banks to lend to small businesses and rising rates of bankruptcies as likely associated with recent suicide trends.

Annual numbers first spiked above 30,000 in 1998 after the Asian financial crisis of 1997, and have remained there ever since. The rate also jumped higher than 20 per 100,000 people that year, and has stayed above that threshold.

In the wake of the March 11 earthquake, tsunami and nuclear crisis this year, public health officials feared another spike in suicides. But there is no evidence yet of an increase in suicide in the disaster prefectures, Motohashi said in an email, and available data for Aomori, Miyagi and Fukushima did not show an increase in April or May.

The high and rising rate of suicide, along with other health threats like tobacco, could even damage Japan’s position as the country with the highest life expectancy in the world if current trends continue, Christopher Murray from the Institute for Health Metrics and Evaluation at the University of Washington wrote in a separate comment.

And the rates continue to pose “a serious and urgent challenge for Japanese society,” Motohashi said, calling for “better efforts to increase public knowledge about depression.”