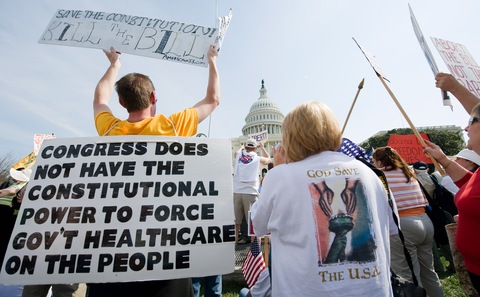 Federal judge Henry Hudson ruled Monday afternoon that a major provision of the health care reform law is unconstitutional, setting up a legal battle that will likely end at the Supreme Court.

In his decision, the judge sided with Virginia Attorney General Ken Cuccinelli, who argued that the Congress does not have the authority to require Americans to purchase health insurance.

“The Minimum Essential Coverage Provision is neither within the letter nor the spirit of the Constitution,” Judge Hudson wrote.

The full decision is embedded below.

Hudson is the first federal judge to declare the individual mandate unconstitutional — two other judges have sided with the Obama administration.

“I am gratified we prevailed. This won’t be the final round, as this will ultimately be decided by the Supreme Court, but today is a critical milestone in the protection of the Constitution,” Cuccinelli said in a statement.

Cuccinelli argued that the Commerce Clause of the Constitution, which gives the federal government the authority to regulate interstate economic activity, could not be used to justify requiring individuals to buy health insurance.

“The federal government asked the court to consider as economic activity the decision not to buy health insurance,” he said in a press conference. “This court and this judge rejected that leap of logic.”

But federal officials expressed confidence Monday that the courts would ultimately decide in favor of the new law.

“We are disappointed in today’s ruling but continue to believe — as other federal courts in Virginia and Michigan have found — that the Affordable Care Act is constitutional,” Justice Department spokeswoman Tracy Schmaler said in a statement. She added, “We are confident that we will ultimately prevail.”

And White House spokesman Robert Gibbs said in a press conference that the administration would appeal the ruling and that “Our belief is that the health care act will go forward and that it is constitutional.”

Meanwhile, supporters of health reform expressed disappointment in the decision.

Ron Pollack, the executive director of Families USA, which supports the health reform law, said in a statement that the judge’s ruling against the individual mandate was “short-sighted”:

“Unfortunately, striking the ‘individual responsibility’ provision could also jeopardize the most popular insurance reform in the statute: preventing insurance companies from denying health coverage to people with pre-existing health conditions. While politically motivated opponents of the Affordable Care Act, like Attorney General Cuccinelli, may applaud this decision, for people with health conditions it could be quite tragic,” he said. 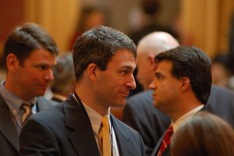 The Virginia lawsuit is one of the most significant of the more than 20 federal court cases that have been brought against the new law. Most of those cases argue that Congress overstepped its bounds in passing the “individual mandate” — the portion of the law that will require nearly all Americans to purchase health insurance beginning in 2014. The Obama administration has argued that the individual mandate is within Congress’ authority.

Two federal judges, in Michigan and Virginia, have already ruled in favor of the administration in similar challenges — one from a private Christian college and one from a conservative legal group.

But Monday’s ruling is considered more significant because it is on behalf of a state. A different federal judge will hear arguments Thursday in the other major court case, brought by a coalition of 20 state attorneys general led by Florida’s Bill McCollum.

Many observers expect Judge Hudson to rule against the administration Monday. But the decision will not have any immediate effect. The individual mandate portion of the law does not begin until 2014, and any decision will almost certainly be appealed to the Supreme Court.

Find more coverage on our Rx for Reform page.