“The King’s Speech” is leading the Oscar buzz this year with 12 nominations, including Best Picture and Best Actor. The movie, which portrays King George VI’s years-long battle to overcome stuttering, is also drawing new attention to an age-old mystery — what causes people to stutter? 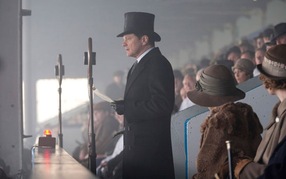 For most of the 20th century, experts blamed psychology — shyness, bad parenting or other factors. Unlike most communication disorders, stuttering doesn’t show up immediately when babies begin to talk — it usually starts around the ages of two to four.

“That’s what allowed people like Freud to start to speculate that it might be something in the environment, or parenting, that brought it on,” said Nan Ratner, a stuttering researcher at the University of Maryland. We now know that’s not true, Ratner said, speaking on a panel of researchers last week at the annual meeting of the American Association for the Advancement of Science.

Over the past two decades, scientists have been using new technologies and tools to chip away at the long-held belief that stuttering is primarily a psychological problem. With functional Magnetic Resonance Imaging (fMRI) machines and the tools of genetic analysis, they’re beginning to understand the physiological and genetic underpinnings of the disorder.

For instance, scientists have long known that stuttering runs in families. But studies have shown that adopted children of adults who stutter are unlikely to stutter themselves. That suggests that a genetic cause — children don’t learn to stutter by hearing parents do so, instead they inherit a stuttering gene.

Recently, Dennis Drayna, a geneticist at the National Institutes of Health, identified mutations on three genes linked to stuttering in families in the United States, Pakistan, and the U.K. He thinks those genes could account for 5 to 10 percent of the stuttering that runs in families worldwide.

Surprisingly, these mutations are in the same genes in which other, rarer mutations cause a deadly set of diseases called mucolipidosis type II and III. In mucolipidosis, a metabolic glitch causes the body’s cells to be unable to properly recycle waste products.

Drayna thinks that in people with a genetic mutation that causes stuttering, a different, milder form of that same problem might affect only a particular set of brain cells related to speech.

“What we think is going on, and it’s really just a hypothesis at this point, is that there is a class of cells, neurons in the brain, that are exquisitely sensitive to this modest little metabolic deficit. And these cells are related directly to speech,” he told reporters. “So our goal is to find out exactly what these cells are, what they’re connected to, and how that goes awry.”

Meanwhile, other scientists are looking directly at the brain to try to understand how differences in brain function and anatomy might be connected with stuttering. Luc De Nil, a researcher at the University of Toronto, has for more than a decade used physiological tests and fMRIs to examine the brains of people who stutter and those who don’t.

Using fMRI and PET scans, De Nil has found that the parts of the brain that control speech movements are overactive in people who stutter, and auditory processing areas are underactive — though it’s not clear whether this is a cause or result of stuttering.
De Nil has found differences in the volume of gray matter (brain cell bodies) and white matter (brain cell connections) in certain parts of the brain between people who stutter and those who don’t.

“It’s not just the physiology, it’s also the underlying anatomy — the brain that looks different in people who stutter,” he said.

But, De Nil says, both are approaching “the same question from different ends.”

“Ultimately I think where the two will meet is that the genetic information will allow us to explain why the brain does what it does in people who stutter,” he says.

“The King’s Speech,” of course, does not reflect scientists’ new knowledge of what underlies stuttering. But De Nil — who says he liked the movie — says that it does accurately portray what people thought at the time. And, he adds, the movie also accurately shows that stuttering is a lifelong disorder with no miracle cure.

“King George stuttered throughout his life. He was able to manage it better, but he continued to stutter,” says De Nil. “At the end of the movie, when he gives a speech to the nation, it would have been very easy for the directors to have him [have] a breakthrough, a ‘eureka moment.’ And that was not the case. He was able to do the speech, but he continued to have subtle but noticeable stuttering movements throughout his speech. I really like that there was no attempt to have a miracle cure.”