New Ban on Bath Salts After ‘People Started Dying From It’ 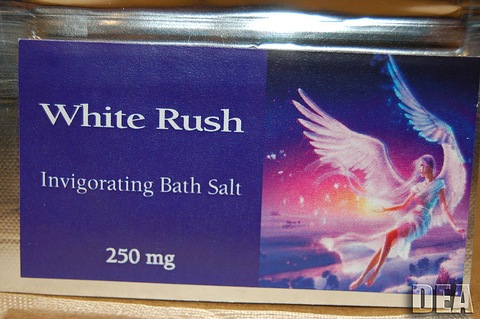 No more picking up “Bliss,” “Cloud Nine” or “Hurricane Charlie” at the corner grocery store. The Drug Enforcement Administration has issued a temporary ban on U.S. sales of street drugs generically known as “bath salts.”

The chemicals have little in common with the products you sprinkle into a bubble bath for an extra waft of eucalyptus. Far from it. Recreational drug users say these new substances are a good substitute for cocaine, LSD or methamphetamines.

When they first arrived in the United States about two years ago, the substances were sold openly in gas stations, convenience stores, head shops and on the Internet. The powder-like drug creates an extreme high which is often accompanied by intense side effects including higher blood pressure, agitation, hallucinations, extreme paranoia and delusions.

And its spread has been rapid. In 2010, poison centers throughout the nation reported 303 calls from people who had ingested or inhaled the substance. In the first nine months of this year, that number jumped to 5,226.

The new ban places the drug on the DEA’s most-restrictive list, reserved for substances that have a high probability of leading to abuse. The three most common ingredients of the drug — mephedrone, methylenedioxypyrovalerone (MDPV) and methylone — will be outlawed for a year. That’s long enough for officials to conduct trials and determine whether the ban should become permanent.

Mark Ryan, director of the Louisiana Poison Center, calls the potential impact of bath salts nothing short of devastating. Below, he answers our top questions on the drug’s rapid spread — and the likelihood that efforts to stop it will work.

What’s the story behind the name? Do these drugs have any relation to the products sold in shopping malls?

Ryan: There’s really no connection. Names like this helped the people who manufacture and sell these drugs get them into stores and around the federal law. In addition to bath salt, we’ve seen names like stain remover, window cleaner, toilet bowl cleaner, and plant growth stimulator — all names meant to make it look like they are not intended for human use. But the people who are using them know exactly what they’re for.

Ryan: It has a little bit of a powdery appearance. Some people say that it has a consistency that looks and smells like soap. From my experience it looks like lint and smells like dirty feet. The powdery nature allows people to snort it easily. We’ve also seen people mix it with water and swallow it. We’ve had some try to inject it, some try to use it rectally … It’s a huge range of ways people have tried to get a euphoric high from it.

When did these “bath salts” first start becoming a major problem?

Ryan: We were first warned about it in the beginning of 2010. The very first cases were in July of that year but it really started to take off in October. That’s when Louisiana kind of went from no cases to the space shuttle taking off – we went vertical. It looks like the majority is coming from manufacturing centers in China, and in Louisiana, we had some very entrepreneurial drug dealers who picked up on it before anyone else in the United States.

And it was just being sold openly in convenience stores?

Ryan: We saw it in convenience stores – not chains, but “mom and pop” types of places. Gas stations. Head shops. We even had people selling it out of the backs of their cars. They were making insane amounts of money, putting $100,000 per week into their bank accounts. At first, law enforcement would stop by to talk to them about what it was doing to peoples’ lives. And the people who were selling this stuff said, “Look, it’s not illegal and we’re making a ton of money on it. So go away.” Then people started dying from it.

What exactly happens to someone when they take this?

Ryan: There are intense hallucinations. Voices. Paranoia. We’ve seen a number of cases in which people have started shooting their house because they can’t get rid of the voices. There was one report where the man was barricaded in the attic with a gun because he thought there were monsters downstairs. He said he would kill them before they had a chance to attack his family. Another who cut himself up trying to “remove the wires” from his arms. It’s not unusual for them to start seeing demons, aliens, for them to believe law enforcement is after them — that armies are coming to harm them. It’s intense paranoia. A fear that things around them — even people they know or love — are going to try to hurt them. I’ve talked to some people who have used it. A few made strong comments that after they did it, they wished they had never touched the stuff. We know how to treat crack and heroin. People who are high gradually recover and they leave the hospital. But with this new drug, some of these people get worse over a period of days. Some remained in the hospital for weeks. Family members have reported that their loved ones are still paranoid a year later. With this drug, there are the stimulant effects similar to methamphetamines — increased heart rate, increased blood pressure, that kind of thing. But this psychosis to the point of a mental break is what seems new here. Methamphetamines don’t typically cause this psychosis.

Are certain parts of the country seeing worse outbreaks than others?

Ryan: It’s all over the place. It started mainly in the South. After the first of the year, it really started to move to all corners and to all states. It got to the point that the poison centers alone started reporting some 800 calls per month. And that’s certainly not all of the cases. I’m sure the total number is much, much larger.

What are the chances that the DEA ban is going to improve the situation?

Ryan: The chemicals in this drug are synthetic derivatives of a substance called Cathinone. The ban includes three of the synthetic versions and we have identified five. So while it’s an excellent start, we run the risk of somebody just changing the ingredient in the package. For instance, there’s one version called “Cloud Nine.” We bought nine packages of it from different parts of the state. There were different ingredients in each one. And that’s really made it difficult for us. While all of these substances are similar, they’re also different. So we haven’t been able to pin down that a certain amount of a certain substance causes a certain type of reaction in people.

Is there ever a way to actually get ahead of this recreational drug market?

Ryan: Well the thing sort of morphs and changes as it goes. For example, if you look up “bath salts” on the Internet today, you’ll still get some hits. But you’ll find that a lot are selling the same thing under the guise that it’s “research chemicals.” Now we’re seeing that there are some newer compounds emerging here and there and the lines are being blurred. We tested a sample labeled “bath salts” from the East Village in New York and it turned out to be a marijuana synthetic. Something labeled “Black Rose Plant Feeder” was an anesthetic that causes vomiting and seizures. So it’s all Russian roulette. People truly don’t know what they’re getting. There are just a whole lot of substances that have the potential to be abused out there. And when I say that it seems like there are people who will use anything to get high, it’s true. We had a kid recently who said he had dipped his cigarette in liquid rat poison. After he was stabilized we asked him why. He told us that he didn’t know if it would cause a buzz, but if it did, he’d be the first. It’s hard to get ahead of that.