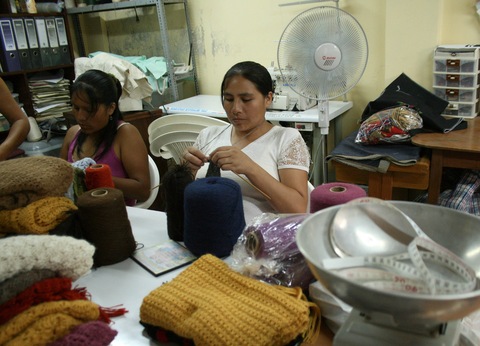 LIMA, PERU — Each afternoon, in the Santa Rosa slum built into the steep hillside surrounding Lima, a group of 15 women meet to knit.

Surrounded by spools of alpaca yarn, they take up their needles and piece together scarves and ponchos in a rainbow of colors — from vibrant blues and mustard yellow to the natural soft creams and tans of the alpaca wool.

When a piece is finished, it will eventually make its way to Geneva, Boston or Japan to be sold. The profits are used first to buy more supplies, then split among the women to help support their families. Women who create designs that sell well get a slightly larger cut of the profits at the end of the year so they experiment with new colors and patterns.

On average each woman will take home about $600 this year, an important economic boost in a country where 44 percent of people live below the poverty line.

The group, called Mujeres Unidas, or Women United, is led by a petite Japanese woman, Senora Reiko Kaburaki Lee, who has lived in Peru since 2002. Lee formed the group just before her husband, Lee Jong-wook, became the director of the World Health Organization in Geneva.

When Lee Jong-wook died unexpectedly in 2006 — at the age of 61 and still in office — she decided to stay.

It is Lee’s connections to her home in Japan, the World Health Organization in Geneva, and the non-profit group Partners in Health, based in Boston, that provide the pipeline for Mujeres Unidas products to be sold at a fair price around the world.

Over the years, Lee says women have come and gone from the group, but she has formed tight friendships with them all in the many hours spent bent over their knitting and embroidery.

Today, the women talk quietly as they work, sharing stories and frustrations. Water has been a big problem this week, not unusual for the poor areas of Lima that have no running water. The supplier the women usually buy from has been coming only every other day, so they have had to line up at 4 a.m. to make sure they get what they need for drinking, cooking, and cleaning. By the time they arrive to knit in the afternoon, they are yawning from fatigue.

A mid-afternoon break for coffee and a few crackers seems to perk everyone up. One knitter, Senora Elba, proudly shows off a new hat design she has been working on. It’s a soft beret shape with small folds that form a pinwheel pattern on the top of the hat.

Lee and Elba went back and forth about the best way to create the design, which Lee had seen in a magazine. “We fought about it,” she says with a laugh, but they are both pleased with the final product.

The group is also experimenting with new color combinations — the jury seems to still be out on a maroon and green shawl — and they are making more sweater dresses and jumpers like those seen in chain stores.

They are trying to keep up with the trends, the women say, because fashion is what will sell best.

Talea Miller is reporting in Peru for an upcoming series of reports on the PBS NewsHour about global health issues in the region. Watch for those reports in March.