The day we discovered the cause of the ‘white death’

Of all the infectious scourges that have prowled through human history, artists and writers have deemed tuberculosis to be among the most romantic. It is, after all, the disease that carried away the poet John Keats and the scribbling Brontë sisters. It rang down the final curtain on the lives of Molière and Chekhov. Mention the word “tuberculosis” and music lovers can almost visualize Frederic Chopin trying to compose a nocturne while violently coughing at the keyboard. And of course, who can forget those powerful closing scenes of Verdi’s “La Traviata” and Puccini’s “La Bohème,” which both feature beautiful heroines struck down by TB? 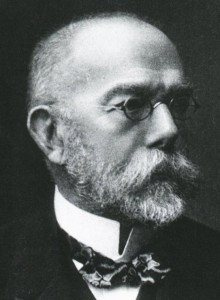 In real life, tuberculosis is a messy, agonizing and debilitating ordeal. Once the tubercle bacilli gain the momentum to proceed unchecked through the body, there is little romance to be found. The experience of active tuberculosis is one of exhaustion, not literary inspiration; drenching bouts of sweating, not hypersexual allure; irritable groaning, not lyrical arias; a relentless cough punctuated with spurts of blood, not the lover’s kiss. This is the nightmarish reality of what was once referred to as the “white plague” (in contrast to bubonic plague, or the “black death”).

In many respects, the modern era of tuberculosis began in the mind of a 29-year-old German physician named Robert Koch, who in 1872 was appointed the district medical officer in Wollstein (a tiny village in West Prussia, now Wolsztyn, Poland). The Koch family lived in a four-room wooden-frame home, and the doctor’s consulting area was situated in the house’s parlor. Using a simple curtain to divide this room in half, Dr. Koch set up a laboratory that consisted of little more than a brand new, brass microscope he had specially ordered from Berlin, an incubator, sundry glass tubes, culture plates and retorts, and a camera he had rigged to the microscope to photograph the microbes he wished to study.

Like many young physicians of this era, Koch was struck by an intense fascination with all things microscopic, a fixation some medical critics derided as “bacteriomania.” Unlike his senior colleagues who ascribed epidemics to the contamination of the air with foul or unpleasant emanations, a notion referred to as the miasmatic theory, Dr. Koch sided with those who would become the scientific revolutionaries of their day by asserting and ultimately proving that specific microbes were the cause of specific infectious diseases. 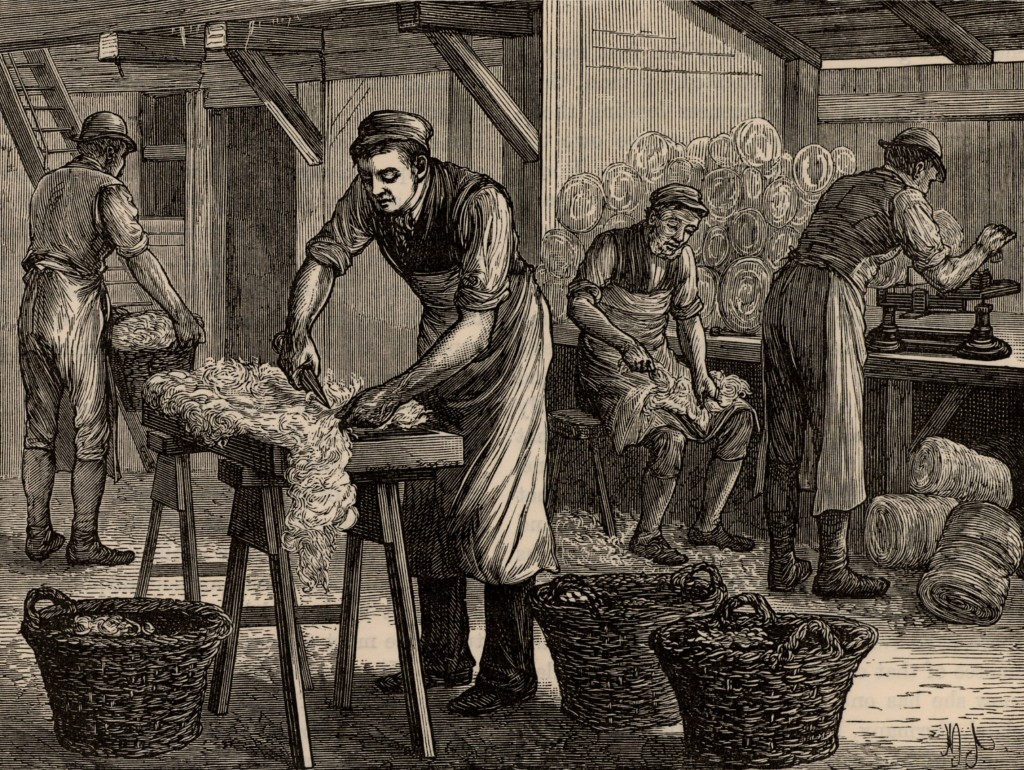 Workers sort the wool from various areas of the fleeces into separate batches. Like tanners, they were at risk of contracting Anthrax from the fleeces. From Great Industries of Great Britain, engraving circa 1880. Photo by Universal History Archive/Getty Images

Because Dr. Koch practiced in an agricultural district where wool production was a major industry, he saw his share of anthrax patients. Most of the cases he treated were what we call cutaneous anthrax, painful coal-black sores (hence, the name anthrax, from anthracite) on the fingers or hands resulting from physical contact with the microbes, which resided in the wool of the sheep they tended. In the most severe situations, or inhalational anthrax, the anthrax microbes entered the lungs of unsuspecting woolgatherers who soon succumbed to raging fevers, hemorrhaging and death.

Dr. Koch hypothesized that these workers were somehow ingesting a microscopic organism living on the hides of animal carcasses but his knowledge ended there. Helpless at his patients’ bedside, Koch was determined to figure out anthrax’s cause and, if possible, find a cure. So every evening, after the last patient left his consulting room, the young physician retired behind his curtain, sat at his makeshift laboratory bench, peered through the barrel of his microscope and conducted his search. Within a few months after he began this work, and countless mice later, Koch had his answer. A microbe named Bacillus anthracis, he painstakingly determined, caused the disease of anthrax.

His research focus was quite controversial at the time because most experts insisted that tuberculosis was a hereditary disease; after all, it did tend to “run” in families.
Serendipity is often one of the most important components of a scientific discovery, yet as another great bacteriologist, Louis Pasteur, often observed, “chance favors only the prepared mind.” Three physical characteristics of Bacillus anthracis favored Koch’s discovery. The microbe has a distinctive appearance under a microscope; it is a large germ that forms even larger and hardy spores that can survive almost any manner of physical manipulation; and it is relatively easy to grow in the laboratory.

Despite his remarkable achievement of scientifically linking a specific germ to a specific disease and the ringing endorsements of many illustrious professors across Europe, the young Dr. Koch was unable to find a university position that allowed him the time and facilities to pursue his research full-time. And so he remained in Wollstein for another four years, until 1880, when he was appointed government advisor to the Imperial Department of Health in Berlin.

It was there that Robert Koch began a series of path-breaking discoveries that led to his winning the Nobel Prize for medicine or physiology in 1905. With a superb laboratory, powerful microscopes and all the assistants, experimental animals and materials he could ask for, Koch decided to investigate one of the major killers of his day: tuberculosis. His research focus was quite controversial at the time because most experts insisted that tuberculosis was a hereditary disease; after all, it did tend to “run” in families. Nevertheless, Dr. Koch was convinced that TB was infectious in nature. Working alone, without telling his colleagues, he locked himself in his laboratory every day for almost six months until he definitively isolated and figured out how to grow, or culture, the germ that we now know causes the disease: the tubercle bacillus, or Mycobacterium tuberculosis.

Never a commanding lecturer, Koch had a thin, reedy voice and tended to interject his phrases with an annoying amount of “ums” and “ers.” But on March 24, 1882, when he presented his findings at a monthly meeting of the Physiological Society of Berlin, he did so with clarity and elegant logic. The medical men present were dumbstruck by Koch’s address. So spellbound and conscious of the fact that they were witnesses to scientific history, the audience could not even applaud, let alone engage in the traditional scientific attack on another colleague’s work. In the room that night was a 28-year-old dermatologist named Paul Ehrlich, who ultimately achieved great fame as the discoverer of Salvarsan 606, the first “magic bullet” against syphilis. Ehrlich later recalled the evening as “the most gripping experience” of his scientific life, and as soon as the lecture was completed he rushed home to his makeshift laboratory, where he spent the night developing a novel staining technique for the tubercle bacillus.

Seventeen days later, on April 10, 1882, Koch published his lecture, “Die Aetiologie der Tuberculose” (The Etiology, or Cause, of Tuberculosis) in the The Berlin Clinical Weekly. Given the deadly command this once mysterious disease had so long wielded over human beings, news of its cause was reported not only in all of the major medical journals of the day but also as front page news in leading newspapers all around the world. Within a few weeks, “Koch,” literally, became a household name.

Robert Koch went on to even greater heights when he discovered the cause of cholera and not a few lows, such as in 1890 when he announced a potential cure for tuberculosis he called “tuberculin.” It turned out to be not at all therapeutic, much to Koch’s embarrassment, but, in later years, tuberculin emerged as a diagnostic tool to determine those who were infected with the TB bacillus. Along the way, he made many more discoveries, mentored some of the finest bacteriologists of his era, and, in keeping with the rough and tumble world of academia, made quite a few scientific enemies.

Nevertheless, Robert Koch’s greatest evening unfolded some 133 years ago today, when at 39 he solved the riddle that had plagued doctors for centuries: what, exactly, caused tuberculosis? Although in the decades since that momentous night, modern medicine has developed an armamentarium of tools to diagnose and effectively treat this deadly malady, TB continues to stalk the planet with a vengeance. In 2013, more than 9 million people became ill with it and 1.5 million died of it, making tuberculosis one of the leading causes of infectious death in the world today (only HIV/AIDS kills more). And while global tuberculosis rates have been slowly falling since 2000, we still have much more work to do before the “white plague” truly becomes history. The great Robert Koch would expect nothing less of the generations of talented microbe hunters who have followed in his illustrious path.

Left: A sanatorium for tuberculosis patients in Aspromonte, Italy, circa 1920. Photo by TCI/EyeOn/UIG via Getty Images