Column: Marilyn Monroe and the prescription drugs that killed her

If headlines could scream, then scream they did in early August 1962. According to nearly every newspaper, television, and radio broadcast in the world, early on Aug. 5, Marilyn Monroe, Hollywood’s brightest star, was found dead in the bedroom of her Brentwood, Los Angeles home. She was only 36.

Long before the opiate and opioid epidemics struck American life with such resounding force, there were plenty of other prescription drugs abused to excess with deadly results.

On Marilyn’s bedside table was a virtual pharmacopoeia of sedatives, soporifics, tranquilizers, opiates, “speed pills,” and sleeping pills. The vial containing the latter, a barbiturate known as Nembutal, was empty. In her last weeks to months, Marilyn was also consuming, if not abusing, a great deal of other barbiturates (amytal, sodium pentothal, seconal, phenobarbital), amphetamines (methamphetamine, Dexedrine, Benzedrine and dexamyl—a combination of barbiturates and amphetamines used for depression), opiates (morphine, codeine, Percodan), the sedative Librium, and alcohol (Champagne was a particular favorite, but she also imbibed a great deal of Sherry, vermouth and vodka).

Her last two pictures, “Let’s Make Love” (1960) and “The Misfits” (1961), were commercial flops. The latter, written by her husband, the Pulitzer Prize-winning playwright Arthur Miller, served as the breaking point in their marriage and the two were divorced shortly after “wrapping” that film. During this period, Monroe suffered from several mental health problems, including substance abuse, depression, and, most likely, bipolar disorder, along with physical ailments such as endometriosis and gall bladder disease. 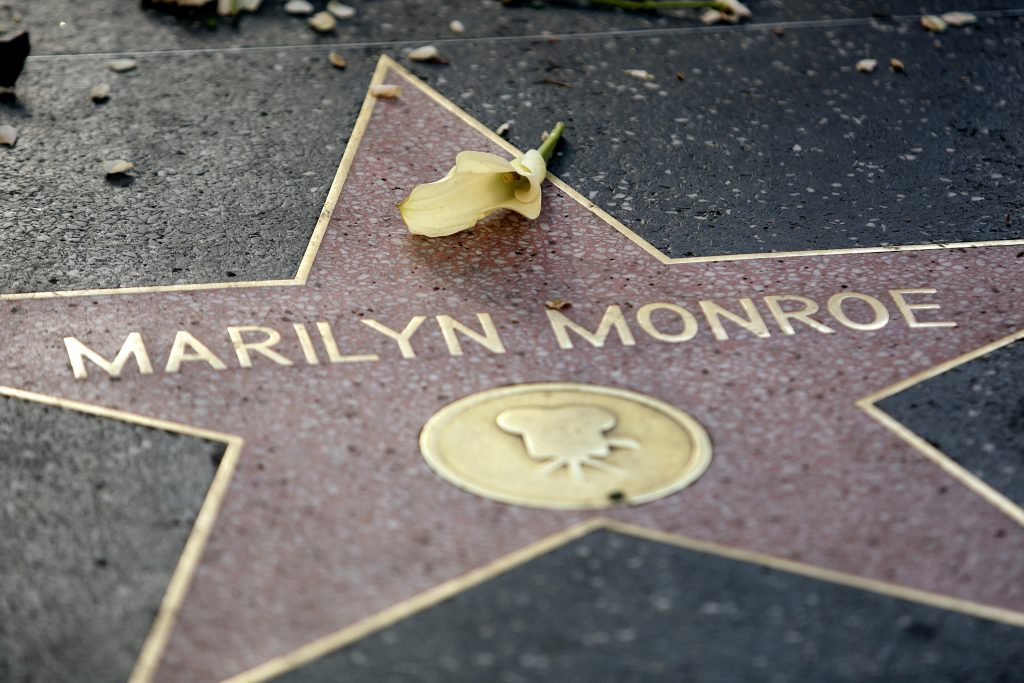 A flower lays atop the Hollywood Walk of Fame star for the late actress Marilyn Monroe in Hollywood August 5, 2012. A memorial service was held in Los Angeles to mark the 50th anniversary of Monroe’s death. REUTERS/Krista Kennell

On June 8, 1962, the Hollywood film factory, 20th Century Fox, fired her while she was filming the ironically titled “Something’s Gotta Give”, (a remake of the 1940 film “My Favorite Wife”). The cause, the studio claimed, was her “unjustifiable absences.” Marilyn protested she was too sick to work while the studio moguls complained she was apparently well enough to sing “Happy Birthday, Mr. President” at John F. Kennedy’s famous soiree in New York’s Madison Square Garden on May 19. This very public firing was an ignominious end for a superstar whose films had grossed more than $200 million during a relatively brief career.

This is a particularly lethal cocktail, not only because each of these drugs increase, or potentiate, the power of the other, but also because people who take this combination often forget how much they previously consumed, or whether they took them at all, and soon reach for another dose.

Lonely and harassed, Marilyn found getting to sleep especially difficult. To counteract her insomnia, she often cracked open a Nembutal capsule (so that it would absorb faster into her bloodstream), added a chloral hydrate tablet (an old fashioned sedative better known in detective stories as a “Mickey Finn,” or “knockout drops,”), and washed them both down with a tumbler of Champagne. This is a particularly lethal cocktail, not only because each of these drugs increase, or potentiate, the power of the other, but also because people who take this combination often forget how much they previously consumed, or whether they took them at all, and soon reach for another dose.

On her last day of life, Saturday, August 4, Marilyn lolled about her home in a drug and alcohol-fueled haze. Her publicist Patricia Newcomb, her housekeeper Eunice Murray, a photographer named Lawrence Schiller, and her psychiatrist Ralph Greenson were also present, off and on, for most of that day. 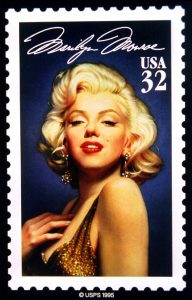 Before leaving for the night, Dr. Greenson asked Murray, who had lived with the movie star, to keep a close eye on Marilyn. Marilyn was last seen alive at 8 p.m., when she retired alone to her bedroom. At around 3:25 a.m., on August 5, Murray noticed that Monroe’s lights were on but the bedroom door was locked and Marilyn did not respond to shouts to open it up.

Murray then walked outside the home and looked inside the bedroom’s “French doors.” She later recalled that Marilyn “looked peculiar. An arm was stretched across the bed and a hand hung limp on a telephone.” Murray called Dr. Greenson, who, upon arrival, broke through the window door with a fireplace poker to get to Marilyn. Sadly, it was too late. Soon after, Monroe’s personal physician, Hyman Engelberg, and the Los Angeles police arrived to the scene. As the entire world learned later that morning, Marilyn Monroe had died of an apparent, or accidental, suicide.

In the years since, Marilyn’s legend and the details surrounding her tragic death and autopsy have transmogrified into a mountain of conspiracy theories and tall tales. Who was she trying to call just before she closed her eyes for the last time? Was she murdered? Who was involved? And what about those pesky and unsubstantiated rumors about the involvement of John and Bobby Kennedy, not to mention the Mafia, the CIA and even members of the Communist Party? On and on it goes, each theory seeming to be crazier or more far-fetched than the last. But because of the sequestered nature of her demise, we will likely never know the precise details.

What remains most cautionary to 21st century readers is that the majority of the substances Marilyn was abusing were prescribed to her by physicians, all of whom should have known better than to leave a mentally ill patient with such a large stash of deadly medications. The barbiturates that killed her are rarely, if ever prescribed, today. Nevertheless, Monroe, like Judy Garland, Michael Jackson, Prince, and too many other famous Hollywood stars who overdosed, was adept at manipulating her doctors to prescribe the drugs she craved and felt she needed to get through her tortured days and nights. This treacherous course worked, albeit haphazardly, until it didn’t work anymore and resulted in a talented young woman dying far too young. 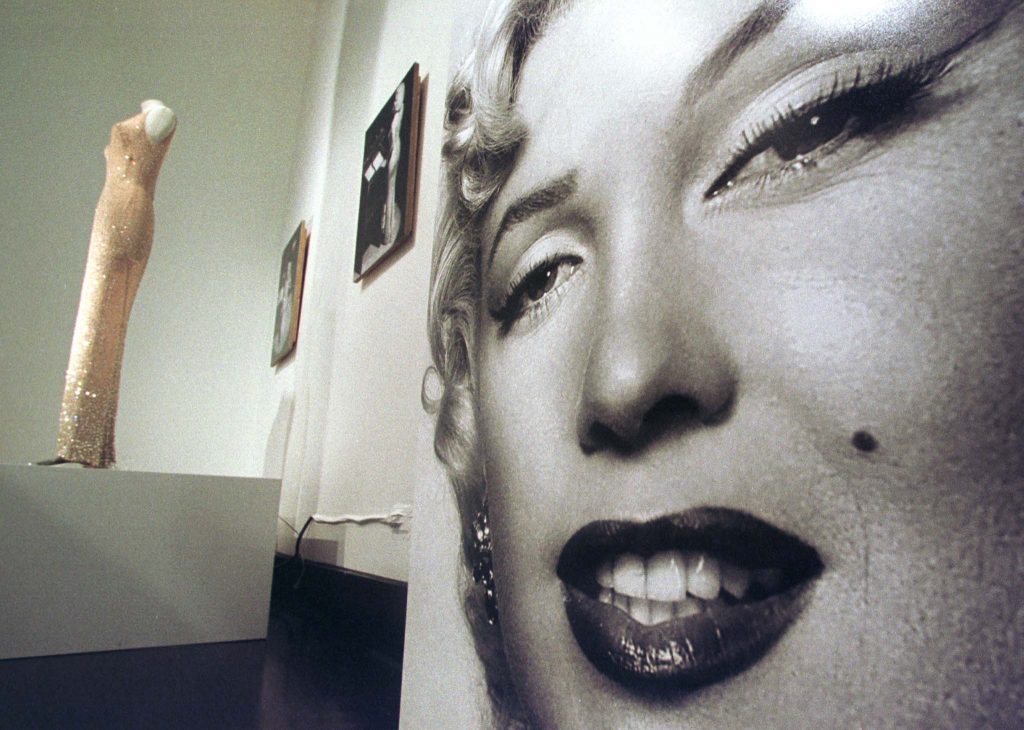 A large photograph of Marilyn Monroe is displayed at Christie’s auction house in New York on June 3 at a preview of the actress’ personal property which will be sold there on October 27-28. The full-length, flesh-colored dress Monroe wore during her famous birthday tribute to President John F. Kennedy in 1962, in background, is among the items to be auctioned.

According to the National Institute for Drug Abuse, more than 52 million Americans over the age of 12 have used prescription drugs non-medically in their lifetime. More than 6.1 million people have used them in this fashion in the past month alone. Although the United States makes up less than 5 percent of the world’s population, its people consume 75 percent of the world’s prescription drugs.

In 2012, enough prescription painkillers were prescribed to medicate every American adult every four hours for one month. The most abused prescription drugs are painkillers, (e.g., opiates and opioids), tranquilizers, and stimulants. Although doctors prescribed many of these pills, many others were either purchased illegally or stolen from friends or relatives.

Marilyn once told a reporter, “the nicest thing for me is sleep, then at least I can dream.” Sadly, Marilyn Monroe’s overdose represents the darker side of medical progress. Five decades after she died, and with the development of so many new, addictive, and potentially lethal painkillers and sedatives, this epidemic has only grown worse. Today, physicians, nurses, family members, and patients are all still struggling to grapple with its effects and stem its deadly tide. 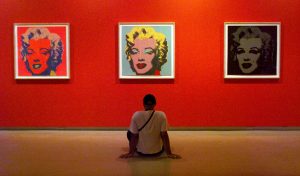 A visitor to the Museum of Contemporary Art sits on the ground listening to an audio guide whilst looking at some of the 1967 Marilyn Monroe screenprints on paper from the exhibition ‘The Warhol Look/Glamour Style Fashion’ in Sydney December 29. The exhibition features works made during each period of the famous American artist Andy Warhol’s career, from sketches and snapshots to major paintings, as well as film and video. Photo by David Gray/Reuters