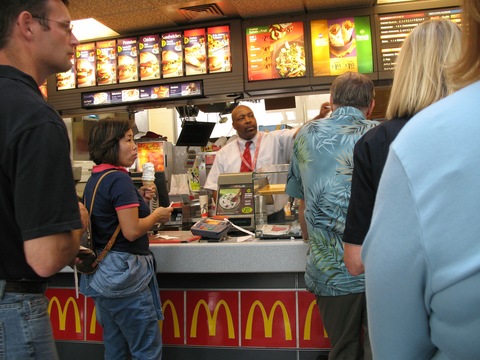 Discussions between the Obama administration and McDonald’s over how the fast-food giant’s health insurance plans will fare in the wake of health care reform are putting the spotlight on “mini-med” plans — the type of coverage that McDonald’s offers its workers.

The Wall Street Journal first reported Thursday that the company is considering dropping the limited-benefit insurance plans that it offers to 30,000 hourly workers. The article quoted a memo from McDonald’s to the Department of Health and Human Services that said that “it would be economically prohibitive for our carrier to continue offering” the plans under the new health reform regulations, which will require insurers to spend 80 or 85 percent of the premiums they take in on benefits for their customers.

HHS and McDonald’s have both denied the accuracy of the article. HHS Secretary Kathleen Sebelius told reporters that “the story is flat out wrong and I am sorry they were not more accurate in their reporting.”

Meanwhile, McDonald’s spokesman Steve Russell said in a written statement: “Media reports stating that we plan to drop health care coverage for our employees are completely false. These reports are purely speculative and misleading.”

But the back-and-forth has put the spotlight on the future of “mini-meds.” Also called limited-benefit plans, the plans are not designed to handle catastrophic treatment, explains Beth Umland, the director of the health and benefits research group at the consulting firm Mercer. Mini-med plans set low annual caps on how much they’ll pay out. For a single worker at McDonald’s, the Wall Street Journal reported, a $14-per-week premium will buy a plan that caps out at $2,000 per year. A $32-per-week premium will buy a plan that covers up to $10,000 per year.

According to Mercer’s annual survey of employer health plans, the median annual cap for mini-med plans is $7,000. That means that the plans might cover routine medical care, but in many cases a single hospital stay — which can cost thousands of dollars per day — could easily put someone over their annual limit.

“It’s not really insurance the way most people think of insurance,” says Sabrina Corlette, a research professor at the Georgetown University Health Policy Institute. “It will help you get a strep test, things like that. But if you had a health condition or needed real care, you would find them woefully inadequate.”

The restrictions have led to debate over what the mini-med plans are worth. A Kaiser Health News story explains: Insurers and many employers say that the plans, while not comprehensive, fill a niche and give some coverage to workers who would otherwise have no insurance at all. But some consumer watchdogs and others say they worry that people don’t always fully understand what they’re buying, and may not realize the limits of their coverage.

The mini-med plans have been popular for one main purpose — offering inexpensive insurance to hourly workers at large firms in the retail sector: companies like McDonald’s. Overall, only 7 percent of large employers (those with more than 500 workers) and 20 percent of “jumbo” employers (those with more than 20,000 workers) offered mini-med plans in 2009, according to Mercer. But 63 percent of “jumbo” retail or wholesale companies did. Home Depot, CVS, Staples and Blockbuster are among the many other companies that offer the plans, according to the Wall Street Journal.

That usage pattern hasn’t changed much in the past few years, says Umland. “We thought that maybe that with the economy […] you’d see increasing reliance on mini-med plans in other areas,” she said. “But in fact it’s been staying very steady.”

Employers who offer the plans are worried about the changes that health care reform may bring. Two aspects of the law could affect the plans: First, the law makes it illegal for plans to set lifetime dollar caps on benefits as of this year. It also sets high minimums for annual caps ($750,000), and will abolish those as well by 2014.

But the law does allow for waivers for the benefit cap rules for mini-med plans, which HHS has already begun to grant. Such waivers could allow plans like the McDonald’s ones to continue.

The stickier point may be an aspect of the health reform that requires insurers to spend 80 or 85 percent of the premiums they collect on benefits for their customers — a provision designed to make sure insurers aren’t spending too much money on overhead or reaping it in profits. But many insurers who offer mini-med plans say that it will be tough to meet the new standards, because of the high administrative costs involved in covering workers in industries with high worker turnover.

The government has not yet released regulations regarding the rule. But In a statement Thursday after the McDonald’s story gained press attention, Angoff said that they plan to address the mini-med question: “The secretary recognizes that mini-med plans are often characterized by a relatively high expense structure relative to the lower premiums charged for these types of policies. We intend to address these and other special circumstances in forthcoming regulations.”